There is a secret that all great musicians have in common. You won’t hear it on their recordings or even in their live performances. And some may even deny it that it ever happened at all. But look back even further and you’ll find it…

The truth is that every great musician started out as a musical apprentice. And the history of this music is full of countless examples.

In each and every case, imitation was the key that unlocked the door to creativity. And if you want to improve as a musician, the same must be true for you.

As a musician today, this apprenticeship is done by imitating the style and sound of your favorite musicians – transcribing solos.

If you haven’t transcribed a solo before or found the entire process frustratingly difficult, not to worry – it’s time to start fresh! Here are 10 Brilliant Jazz solos and what you’ll learn from them…

You want to play the right notes and you want to sound good in front of your fellow musicians. So you start focusing on individual chords, scales and individual notes . And this will put your creativity in a box…

Instead take a step back and think about the big picture. You’re not just playing one or two chords, you’re playing over the entire form of the song.

Approach improvising as if you were speaking or telling a story. Present an idea, take a deep breath and continue that idea with another musical statement.

This means thinking in musical phrases.

The blues is a great vehicle to start working on phrasing and a perfect example is Miles Davis’ solo on Blues by Five. Study how Miles builds his solo over each chorus using musical phrases.

The first chorus of his solo has 3 distinct phrases: 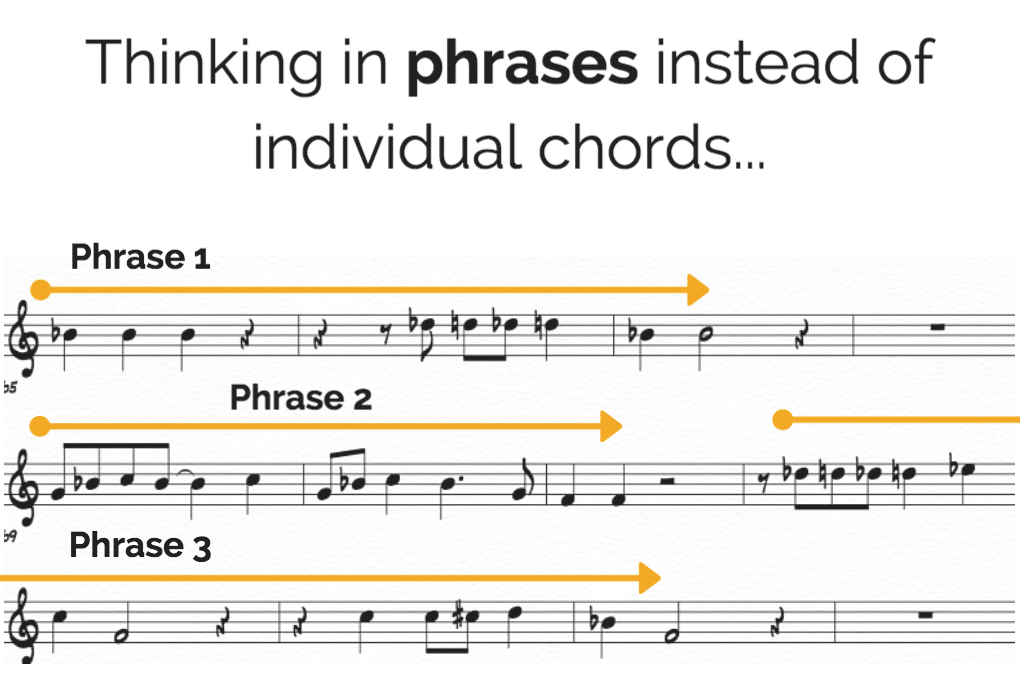 The next time you take a solo look at the big picture. What are you going to say to the listener over this sequence of chord progressions?

What story are you going to tell the audience?

2) Chet Baker, It Could Happen to You

If I asked you to sing a solo over a chord progression without the aid of your instrument what would you sing?

Would you immediately think about the details of music theory or would you close your eyes and gather inspiration for your solo from some other place?

At its core, improvising is simply playing the melodies that are already inside of you. That’s it! All of the theory and technique that you learn is just a tool that enables this inner-sound to come out of your instrument.

When it comes to improvising there is no better example of a musician that embodied this musical approach than Chet Baker.

Chet relied on his ear for everything that he played and this is obvious when you hear him sing. (And why you should start singing as well!) Listen to his vocal solo on It Could Happen to You.

It didn’t matter whether he was playing the trumpet, singing, or figuring out chords on the piano – the music inside him was the same.

One trap that many players fall into as they progress as improvisers is relying on the licks they’ve learned for familiar progressions.

Slowly but surely every solo begins to sound the same. But what if you took a different approach?

Creating a solo in the moment, a theme with one interval or one rhythm. Truly improvising with one musical idea…

Check out Sonny’s classic solo on St. Thomas and study how he takes one simple interval and creates an entire solo out of it. (Notated below in Bb) 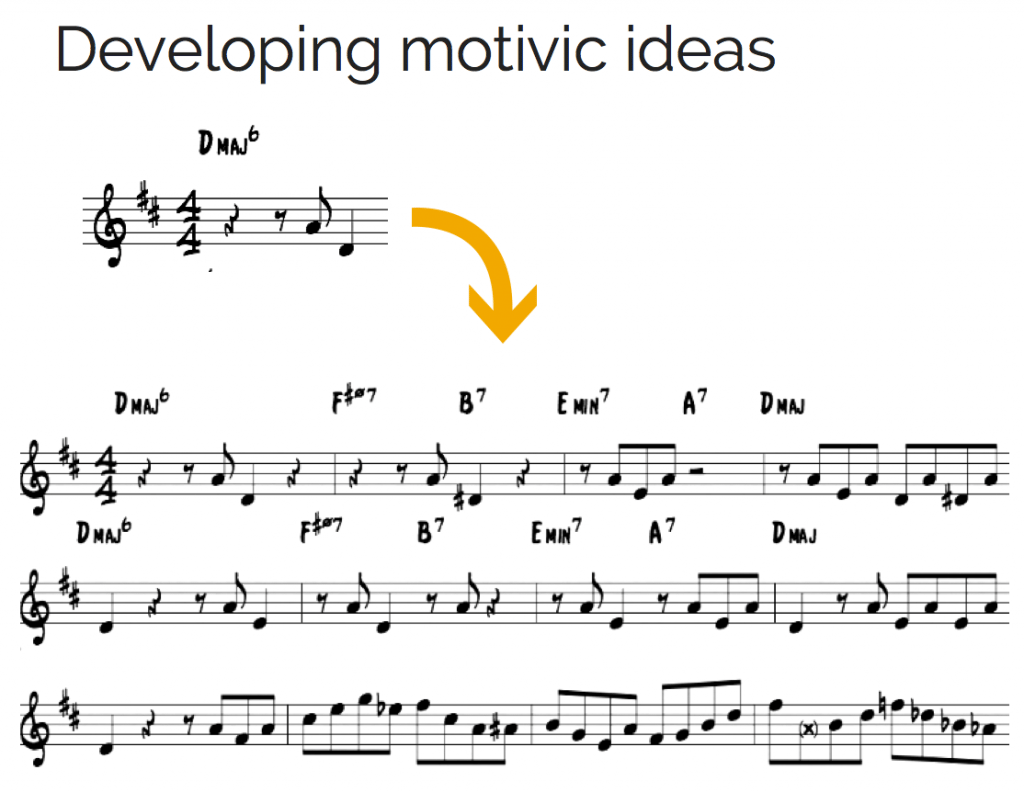 “The whole idea of narrative melodic development was taken to new heights by Sonny. He found a way to make each idea expand to a logical conclusion while simultaneously spinning it off into fresh territory. The result is a kind of improvising that invites and brings the listeners with him as he literally makes connections between ideas that are both surprising and inevitable at the same time.”~Pat Metheney

How do you play longer lines in your solos, especially over those Dominant 7th chords in a blues?

This is a common question for many players and the solution, like any other musical quandary, can be found by listening to the masters. For example listen to Freddie’s solo over Birdlike: 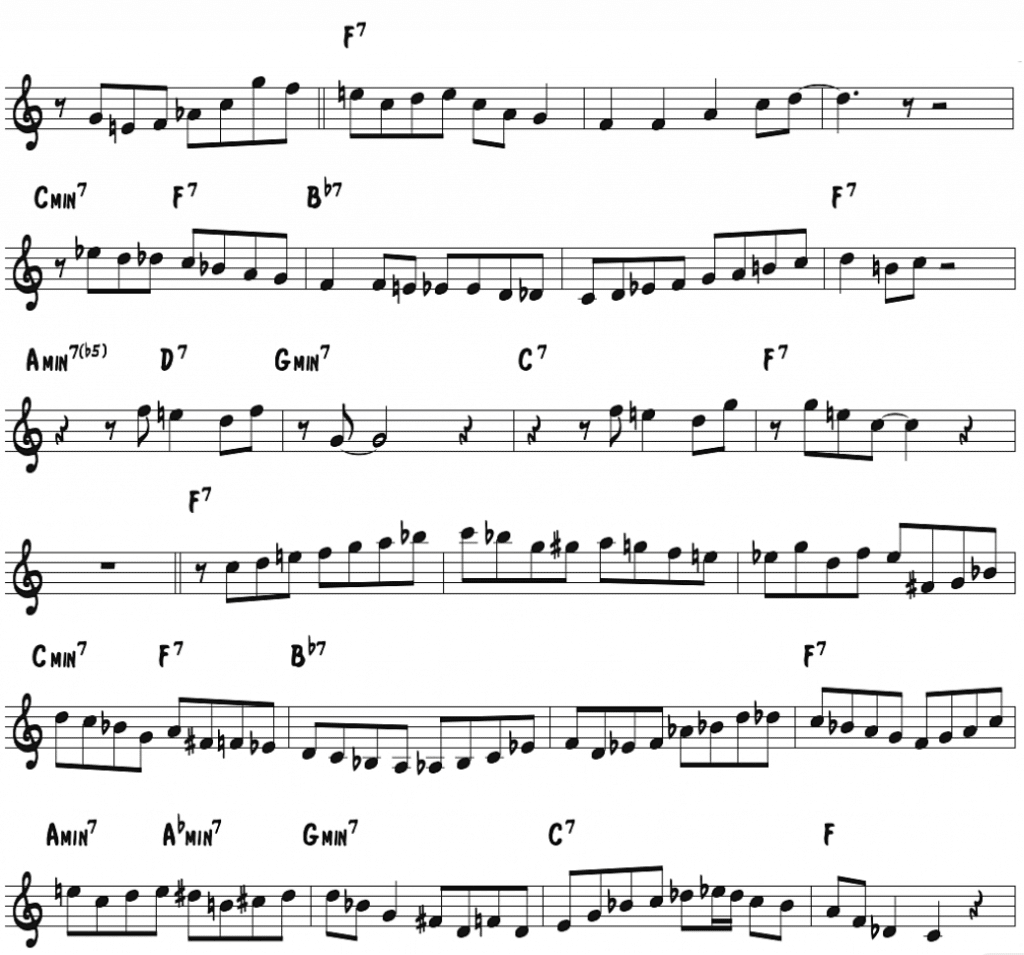 The first step is learning the jazz language. you need to have multiple options to play over Dominant 7th chords.

Check out the example below. Freddie implies a one bar ii-V7 and a two bar ii-V7 over the F7 chord creating a long line with musical momentum.

5) Charlie Parker, All the Things You Are

If you’ve ever studied improvisation, you’ve probably heard this advice: “Use the melody as your guide…”

Some useful words of wisdom. A well written melody perfectly follows the contours of the harmony and creates a memorable musical moment for the listener. You can learn a lot by listening to how a master musician interprets the melody to your favorite standards.

One of these players is Charlie Parker. Like Louis Armstrong before him, Bird stood out because of his rhythmic mastery and control. The way he played melodies, the way he articulated and accented his lines…

Listen to the way he interprets the last 12 bars of the melody of All the Things You Are. 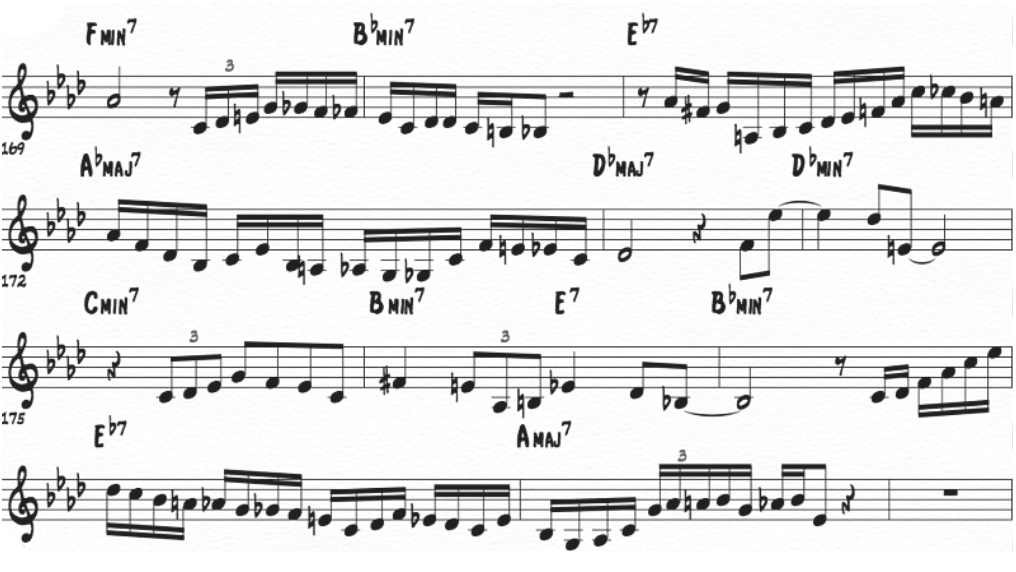 On first listen it may sound like he’s simply creating a spontaneous solo, but he is actually using the skeleton of the melody as the basis for his improvisation. Take another look and you’ll see that the goal notes of his lines are the notes of the original melody: 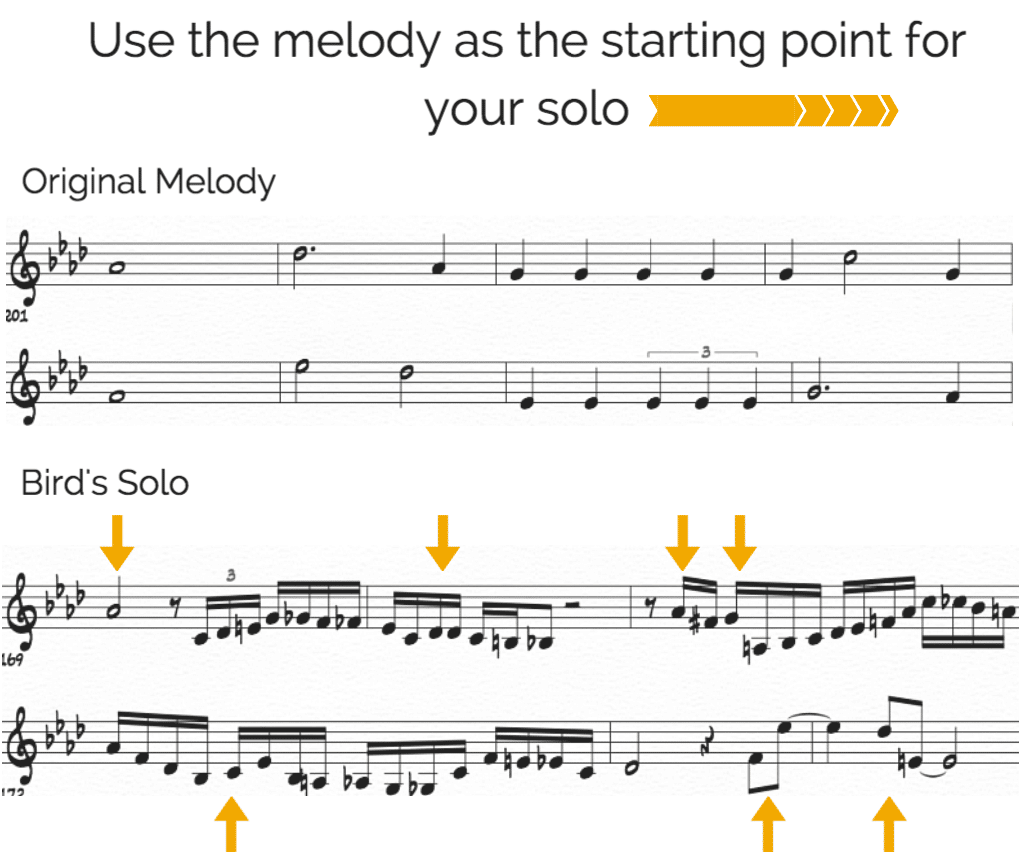 “The saxophone is actually a translation of the human voice, in my conception. All you can do is play melody. No matter how complicated it gets, it’s still a melody.”~Stan Getz

And one of the most common problems for a lot of beginners is making this progression sound musical.

How do you play over a ii-V-I without making it sound like an exercise? How do you turn those chords and scales into a melody?

Listen to Clifford Brown’s solo on Joy Spring and pay attention to how he navigates each ii-V7 progression: 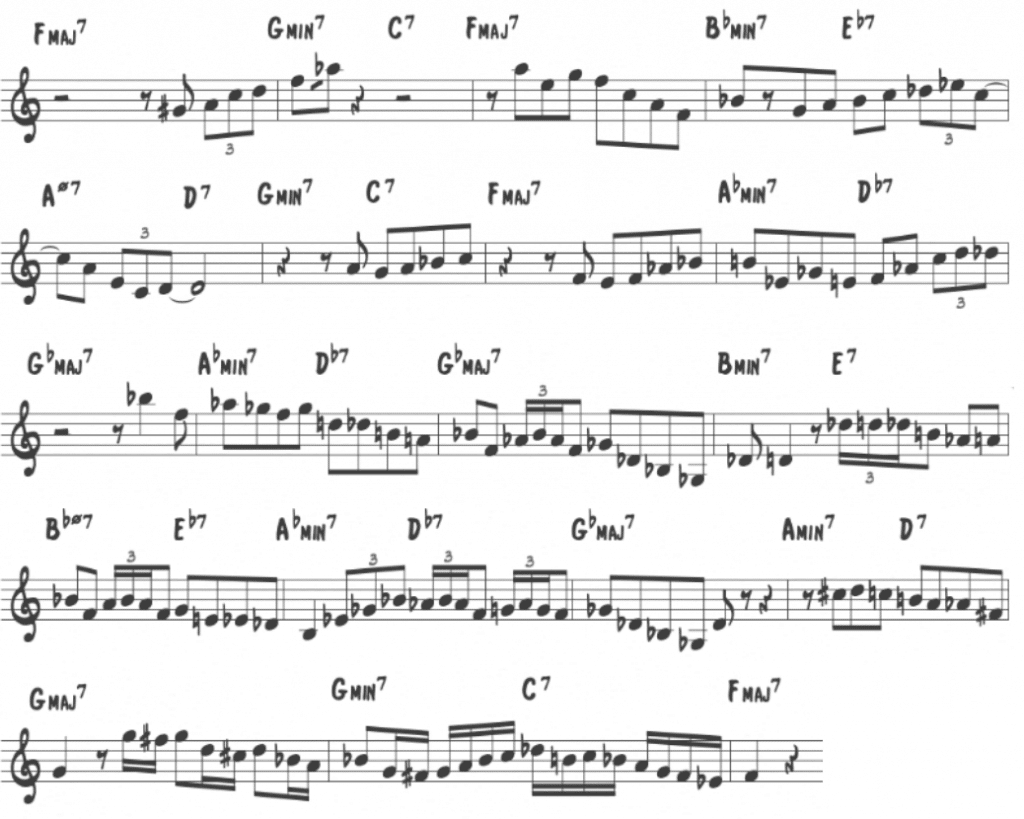 One way that Clifford creates interesting melodic lines is by using enclosures to emphasize goal notes. Take a look at how he uses enclosures in the two lines below. 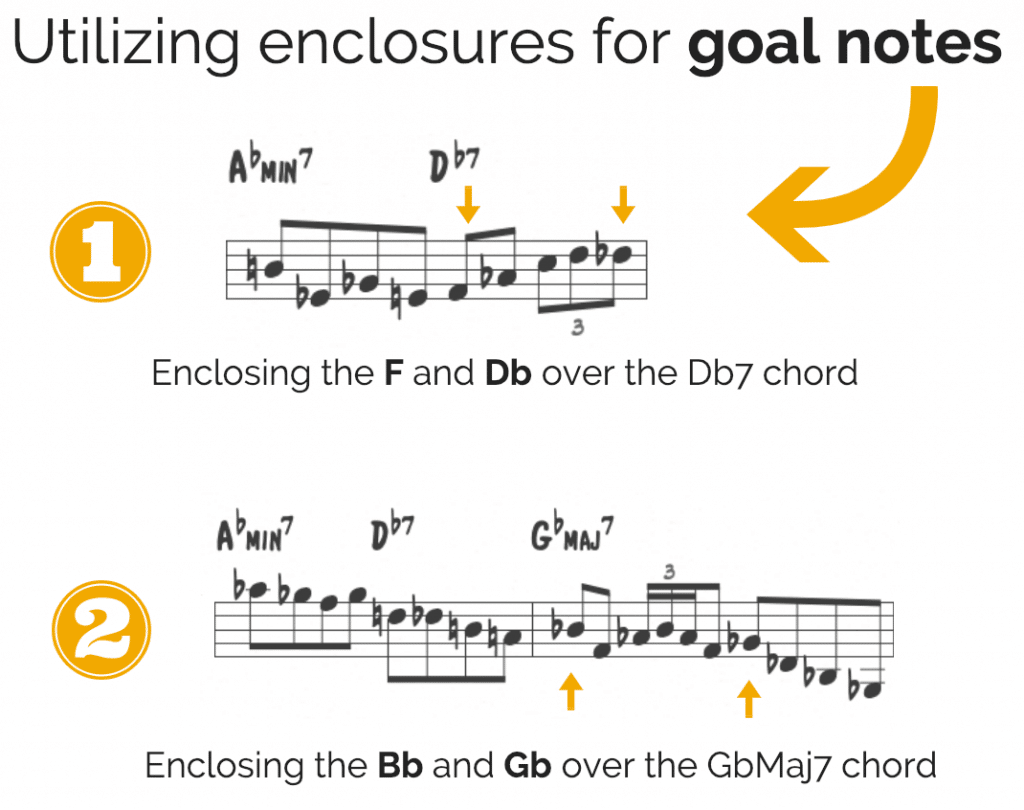 Another stumbling block for many players is learning to navigate Chromatic ii-V’s.

Quickly moving chord progressions in unrelated keys – a challenge for any player. Take a look at how John Coltrane plays over these tricky progressions in his tune Moment’s Notice: 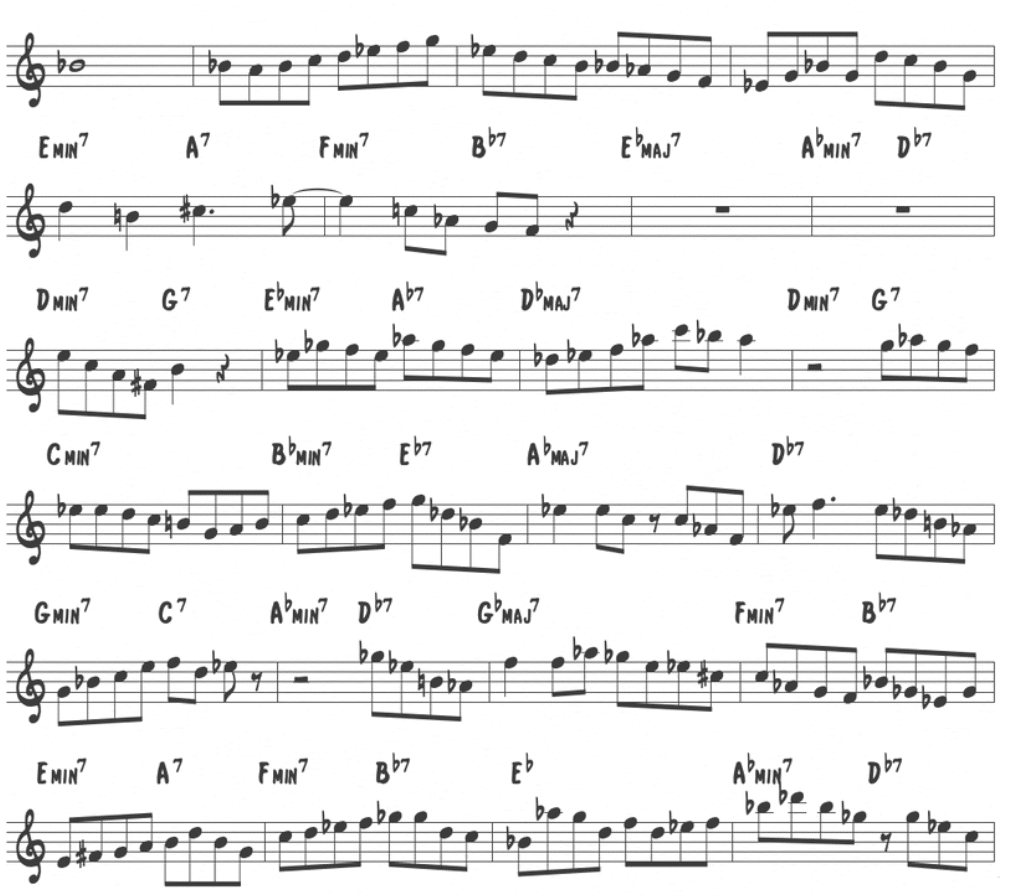 If you look closely at what Trane is playing, it’s not that melodically or harmonically complex. You hear diatonic lines and triads and scalar motion. The faster the tempo or more complex the chord progression the simpler the content of his lines.

Here’s another example from later on in the same solo: 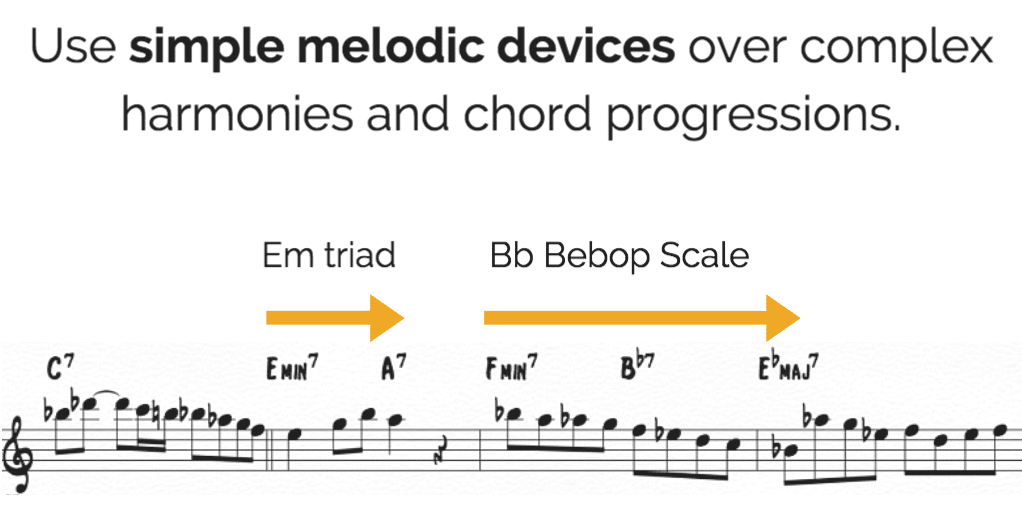 Sometimes it’s the notes that you don’t play that make the biggest impression on your listeners.

When you leave room in your solo and allow your ideas to settle in something special happens. Each note counts and every phrase makes an impact. Most player are focused on the notes, however knowing how to use space in your solo can take your playing to the next level.

Listen to how Miles utilizes space in his solo on So What and notice how this rest makes the notes that he does play that much more effective.

Woody Shaw is often referred to as the last great innovator on the trumpet.

He developed a personal approach to the instrument that was born out of tradition, but centered around non-idiomatic influences and non-traditional approaches.

In other words, he put his stamp on the music by following his own creative path. Instead of the status quo, he imitated the lines of saxophone and piano players and looked for new avenues of harmonic expression in all types of music.

Listen to his solo on The Moontrane and notice his distinct approach to melodicism. (Solo is notated in Bb) 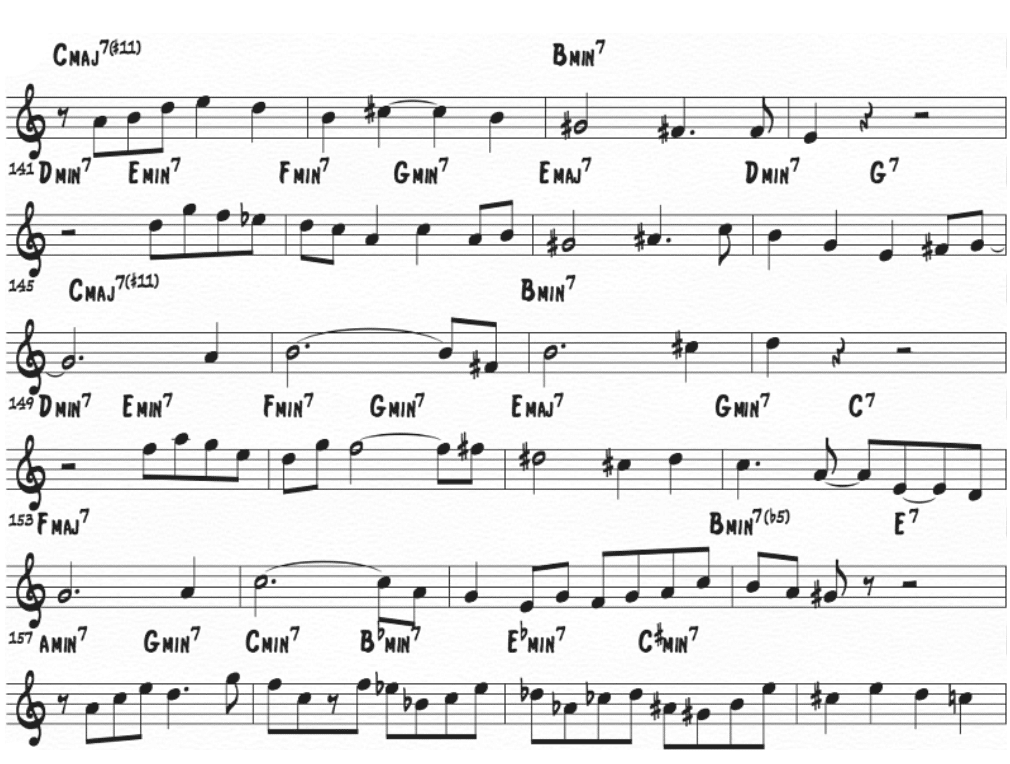 Don’t just imitate the players on your own instrument or follow the herd when it comes to creating your musical style. Look to outside influences and follow the sound that you’re hearing in your head.

What is going to make your music unique?

It’s easy to get in a rut as a musician…

But you don’t have to accept creative defeat when you encounter this situation. You see, harmonic or melodic rules aren’t set in stone. You can break these rules to find new possibilities in your playing – you just have to know how to do it.

Take a look at how Brecker solos over a few of the minor ii-V’s in his solo over Blue Bossa: 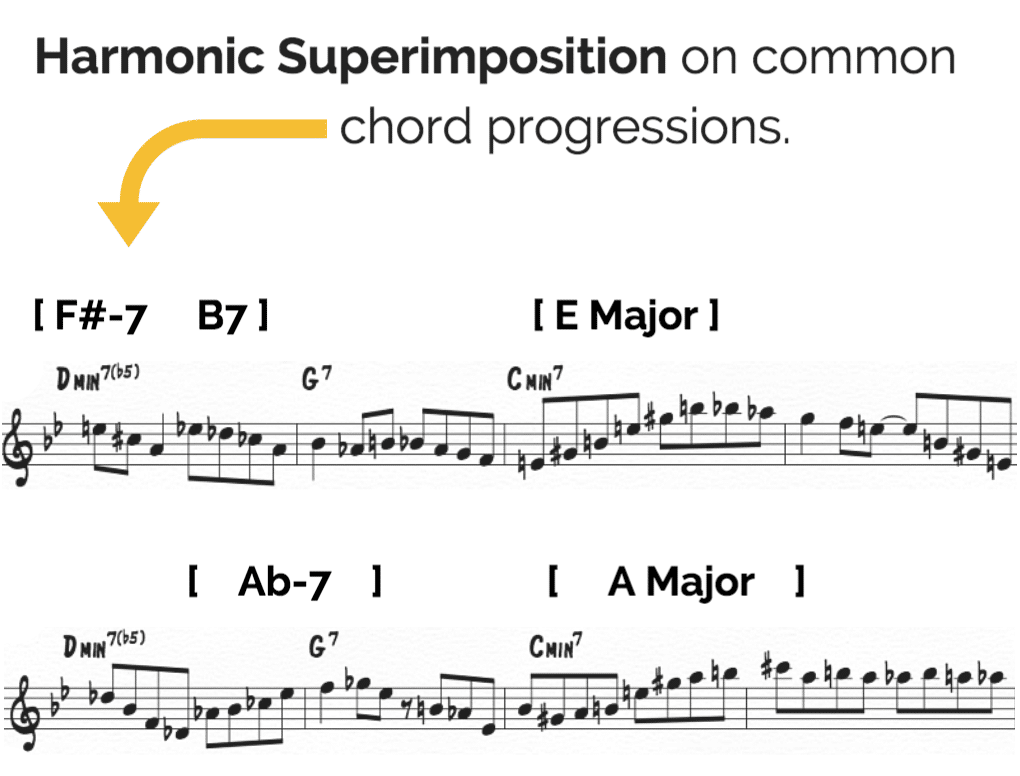 Over common chord progressions, you can superimpose different harmonies and utilize the language that you already know. The key is approaching these harmonic devices with the musicality of language.

These are just 10 solos out of hundreds that you could choose from. Find the solo and the musician that connects with you and inspires you the most.

And whichever solo you end up choosing, the real benefit comes when you learn these solos by ear – straight from the recording.

Remember, the key to improving starts with your ears. Without some solid ear training skills, transcribing solos or even learning melodies by ear will be a frustrating uphill battle.

That’s why we the developed the Ear Training Method, a step by step in-depth ear training course with over 300 audio tracks that will teach you how to get the ears you’ve always wanted. Learn more here…

Once you’ve found your solo, put the recording on repeat, close your eyes, and focus on each note. Sing along with the solo and when you’re ready, learn the notes on your instrument.

This is your musical apprenticeship with the musical master of your choosing. If you put in the practice time, you’ll see the results!