What comes to mind when you hear the word diminished? A chord? A scale? Wait, is it whole-steps and half-steps…or the other way around? If you’re like most players, the diminished sound often creates more questions than answers. But it’s a sound that the greatest players – from John Coltrane to Michael Brecker and beyond – have used to add harmonic complexity and melodic interest to their solos.

And it’s one that you can use in your solos as well…if you have the know-how.

You see, the premise of a diminished chord or pattern is simple, but when you start applying this sound to your solos, the details can get complex very quickly.


Before we start digging in to these diminished patterns, you need to start with an understanding the structure of the diminished chord.

And luckily it’s pretty straightforward, a fully diminished chord is simply a stack of minor 3rds…

Because the construction of these chords is symmetrical, there are only 3 diminished options: a stack of minor 3rds from C, from C#, and from D. That’s it – the pattern just repeats itself.

The most common way you’ll use this sound in your solos is over dominant chords. Applying this diminished structure over a V7 sound is an easy way to access the altered notes of a dominant chord in a logical way.

And again, since the construction of the structure is symmetrical you can apply this sound to any dominant chord built from the related chord tones: (C7, Eb7, F#7, A7) 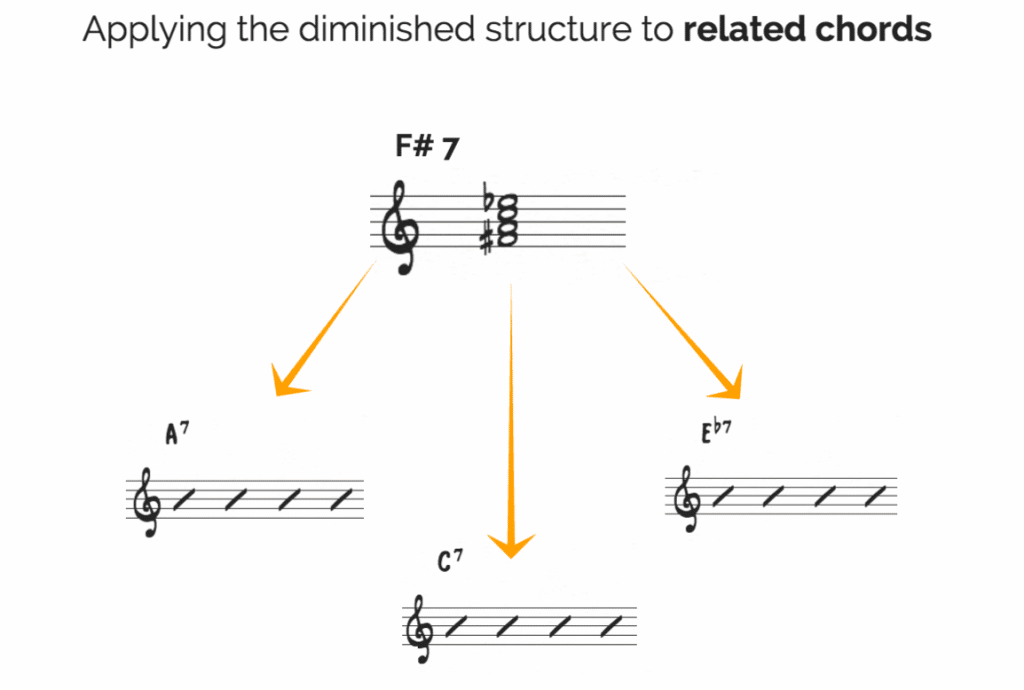 Whichever V7 chord you choose to apply it to, you’ll always highlight the root, #9, #11, and 13 of that dominant chord. For example, if you play that F# fully diminished over a C7…

Start by being able to visualize this structure from any starting note, (remember there are only 3 options). Keep in mind that every example that we’ll show below is built off of this basic structure

But wait…why not just think of a diminished scale??

Because a scale is just one option for accessing a diminished sound in your solos. And thinking of only one scale can put you in a box. However, by thinking of the diminished chord structure as a whole, you open up many other possibilities (that can include scales and much more).

We’ve searched through scores of famous solos – from Coltrane to Brecker, Herbie Hancock and beyond – to find useful examples of the diminished sound that you can use in your own solos.

I. John Coltrane and the diminished pattern

John Coltrane is known for his in-depth study of scales and musical relationships. From Giant Steps to his late quartet, he was constantly searching for new ways to navigate the familiar harmonies and progressions of the jazz repertoire.

Probably the most well known diminished pattern comes from his solo on Moment’s Notice. Over a Bb pedal he plays the following line:

Two months after recording the Blue Train session, Coltrane recorded a live perfomance at Carnegie Hall with Thelonious Monk. In his solo over the tune Epistrophy you can hear the same diminished pattern in action:

At 1:46 in the video above he plays the following line:

In both solos, Coltrane is using the same diminished concept and this is the first diminished pattern for you to know:

Here’s what you should practice…

One of the most notable players to follow in Trane’s footsteps was Michael Brecker. Throughout his many recordings you can hear the use of unique and sophisticated musical patterns.

And one device that he often employed was the diminished pattern. Take a listen to the opening of My One and Only Love:

At about 0:12 in the video Brecker plays the following line:

This is a pattern that he often used in his solos, check out his solo on Peep. Here he takes the Coltrane pattern from above and substitutes a descending 4th into the mix, instead of the descending whole-step:

(You can also think of this as a descending 1st inversion triad, but we’ll get to that later…)

Another player to explore the possibilities of the diminished structure over dominant sounds was the great Mulgrew Miller. Listen this line from his solo on You and the Night and the Music:

In this pattern, like Brecker, he also utilizes descending 4ths. Notice how he alternates the direction of the interval within the line and ends by shifting the pattern into a new key.

Start by practicing a descending 4th from each diminished chord tone:

After you ingrain this descending pattern in the 3 keys variations of the diminished structure, explore changing direction and alternating between keys as Mulgrew does in his line.

Start with the diminished structure stacked in minor 3rds and build a major triad off of each note – like this:

To be successful with this approach however, you have to be able to immediately think of each triad, so spend some time visualizing and ingraining the four triads for each diminished structure.

One player that utilizes this sound in his solos is Mulgrew Miller. Check out how he employs this major triad concept in his solo from Hand In Hand:

Over a Bb7 sound he is implying a Bb triad, a G triad, and an E triad. Note how he inverts the triads and connects them by half-step in a melodic way.

Michael Brecker also uses this triadic concept in his solos as well. Let’s take another look at his solo on My One and Only Love. :

The larger intervals he uses in the original line are a great way to create melodic interest and avoid sounding mechanical when using a pattern.

Another Brecker example comes from his solo on El Nino:

In this pattern he utilizes the diminished sound over a C7 chord that resolves to F-7. Let’s take a closer look at this line. Below you can see how he is using a descending C triad, A triad, and so on:

He approaches each descending triad by a minor third – combining the minor 3rd relationship of the diminished chord with the concept of the related major triads.

Here’s how you can practice a triadic approach to the diminished sound:

It’s an eight note or octatonic scale that alternates between half-steps and whole-steps. Some also refer to this as the double diminished scale because it can be conceptualized as alternating between two diminished arpeggios (C, Eb, F#, A and C#, E, G, Bb).

“…its complications make up its best quality – the potential for giving your solo an “outside” sound. Because this scale breaks the boundaries, it can create a lot of harmonic propulsion in dominant contexts. Like a chromatic scale, it’s ambiguous, but – unlike the chromatic scale – it demands resolution.” ~ Pat Metheney (from Diminished Capacity)

Along with a triadic or chord tone approach to the diminished sound, many great players have also applied this scale to their solos. If we go back to the earlier Coltrane line from Epistrophy, you’ll notice that he ends the line with this diminished scale:

Another notable improviser that used this scale in a melodic way is Herbie Hancock. Check out this line from his solo on There is no Greater Love  and notice how he utilizes the diminished scale over a C7 chord:

Now check out Herbie’s solo on Freedom Jazz Dance. Listen to the way he creatively uses the diminished scale to create melodies:

At 5:10 in the video you can hear Herbie play the following line:

Note how he doesn’t just use the scale note for note, but instead crafts melodic lines that create rhythmic and harmonic interest. Here’s how to practice this:


Another player to consistently use diminished patterns in creative ways was the great Kenny Kirkland.

Listen to this excerpt from his solo on the tune Black Nile:

In this line, Kirkland is using the inverse of the Coltrane pattern – moving a whole step up from each diminished chord tone. You can also conceptualize this pattern as derived from the whole-half diminished scale:

However, the famous “Kenny Kirkland diminished line” is a little more complex. Listen to this live clip of him playing at the Keystone Corner. At about 10 seconds in you can hear this diminished pattern:

Here’s another example of the same pattern that’s a bit slower over a minor ii-V7 on the tune Black Nile:

Here is the pattern extended…

Take a look at how he uses a combination of the diminished structure, the diminished scale, and the first inversion triad. Take this line apart piece by piece and work it into your approach to dominant chords.

Let’s start by listening to his solo on Spain. As you listen, keep your ears open for the way he utilizes diminished patterns over dominant sounds:

Here Chick is using the first inversion triads that we talked about earlier, emphasizing them with a chromatic approach note.

Later on in his solo, he plays the following line over an F#7 sus chord:

There’s a lot going on in this line…but based on what we’ve covered so far you should be able to pick out some of the diminished concepts at work.

Start by breaking down the line into pieces and figure out what individual techniques Chick is using to access the different variations of the diminished sound.


So there you have it…

10 diminished patterns and a lifetime of work!

But remember…you don’t have to do everything at once. Start by visualizing and ingraining the minor third relationship of the diminished chord tones in every key (there are only 3).

Then pick one of the 10 diminished patterns and take it into the practice room for a week. After you feel confident with it, start applying it to the dominant chords in your solos.

Keep in mind that these diminished patterns can sound contrived or out of place when played note for note or forced into a solo.

Aim to apply these patterns in a musical way. You don’t want to sound like a robot when you improvise. These diminished options, like any other jazz language that you learn, are just more tools for you to create your sound.