Think of a jazz standard that you often play. One that you’ve been working on in the  practice room. Picture the chord progression in your mind and imagine yourself getting ready to play the first note of your solo. Now stop! This time I want you to take a different approach to the tune…

Rather than falling into the habit of thinking about notes and chords, this time I want you to clear your mind and ask yourself one simple question:

What story do I want to tell the listeners??

You see, beyond playing the right notes, worrying about scales, or simply making it through a progression lies the idea of creating a musical moment with your fellow musicians and the audience…

This is where the magic of music lies, especially when it comes to jazz improvisation. And it’s a crucial point that many players forget as soon as they look at a chord progression.

But listen to any great improviser and you’ll immediately hear it. Think of Miles, Coltrane & Cannonball playing on Kind of Blue – you’re instantly struck by the story they tell and the musical picture they paint. It’s as if the specific notes don’t really matter at all! 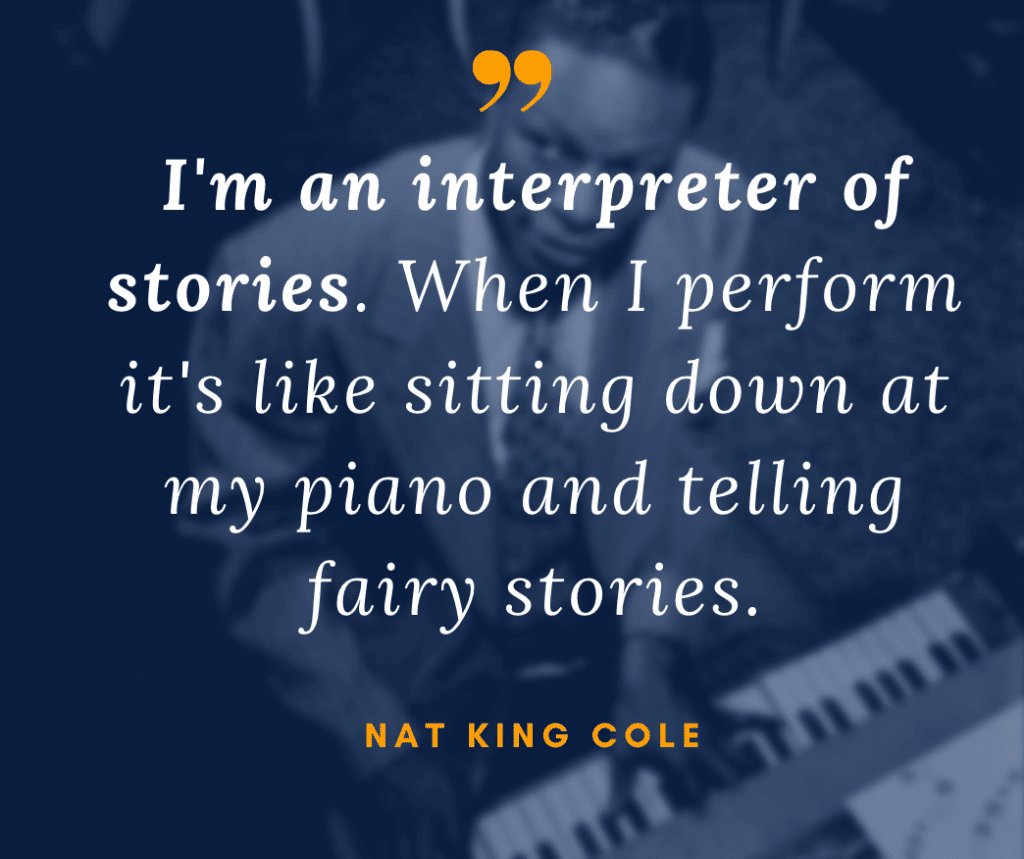 Every great musician and improviser understands this vital aspect of creating impactful music and knows how to take the listener on a journey.

And if your goal is to play music that moves people, you need to incorporate this element into your playing as well!

Story & the Art of Improvisation

Have you ever listened to a solo or a composition and felt oddly unsatisfied?

The notes could all be correct. The technique could be flawless. There were high notes, low notes, fast notes, and harmonic complexity. But when all is said and done you’re left thinking…”meh.”

For some reason the music didn’t go anywhere. It didn’t move you or connect with you as a listener. There was nothing to follow. It was just notes and more notes played over chords…so what?!

The missing piece of the puzzle here is an element of story. 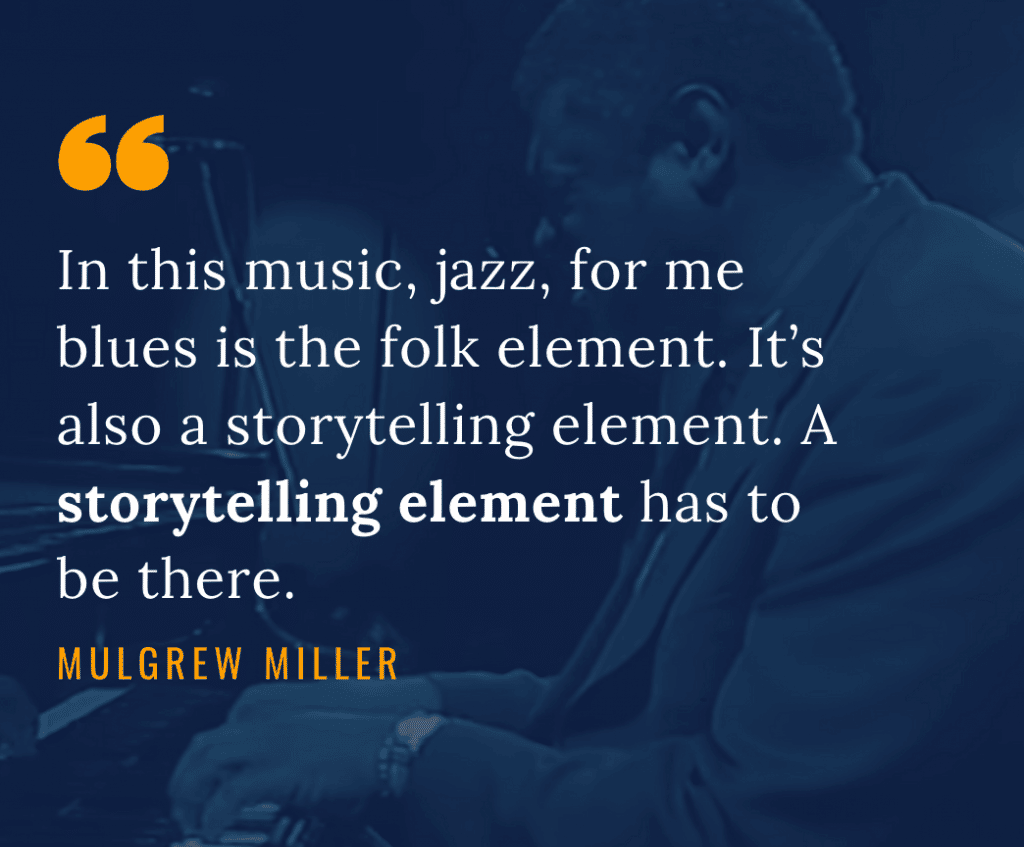 You see, as humans, we’re hardwired to follow a story…

We latch onto intriguing ideas, we relate with characters, we mirror emotions, we follow the twists and turns of a plot, and we want to know what happens in the end.

This effect is the same whether it’s a scary story told over a campfire, a classic movie, a stand-up comedy set, or an improvised solo flowing out of a speaker.

Piece by piece we’re drawn into the narrative and transported from our day to day experience. However, remove this story quality from the equation and you’re left only with information, technique, words, notes…

The magic and emotion of the journey suddenly disappear.

This is the power of story, and why it’s essential for every improviser to incorporate it into their playing. The path there is easier than you think, it starts with learning the specific elements that go in to any story…

Utilizing the 5 Elements of Story 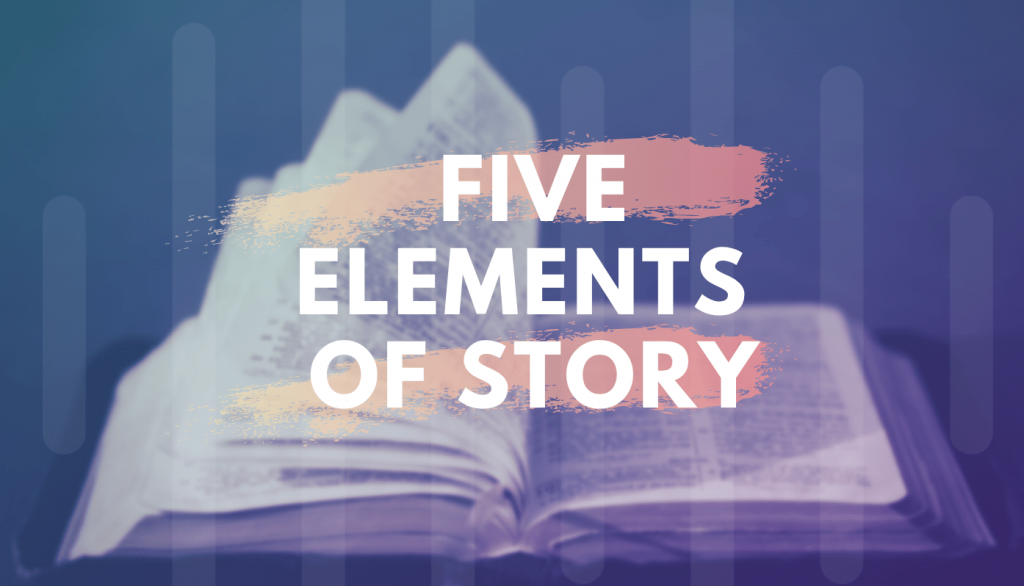 From children’s books and Shakespearean plays to movie scripts and the latest books on the best seller list. Each one relies on a framework to create an experience for the audience, a journey that they take along with the author.

This five-part structure creates a narrative arc from the beginning of the story all the way to the end. A premise that the reader is drawn into and can follow along with each step of the way…

This same structure can be applied to music as well, especially when it comes to crafting an improvised solo over a chord progression. Think about it – when we play a solo we’re essentially creating this story arc in real-time.

Rather than approaching improvisation as simply playing notes over a chord progression, shift your mindset and think “What story am I telling in my solo?”

Let’s take a closer look at how these story elements relate to jazz improvisation. Here’s how you can apply the 5 elements of storytelling and story arc to any tune you might play…

With this broad outline of your solo you’ll be able to take the listener on a journey through the tune. To add an element of story, structure, and feeling that gets beyond the notes and chords

But rather than just talking about these concepts, let’s check out this story framework in action from one of the best improvisers alive today…

Kenny Garrett: Creating a story arc in your solo 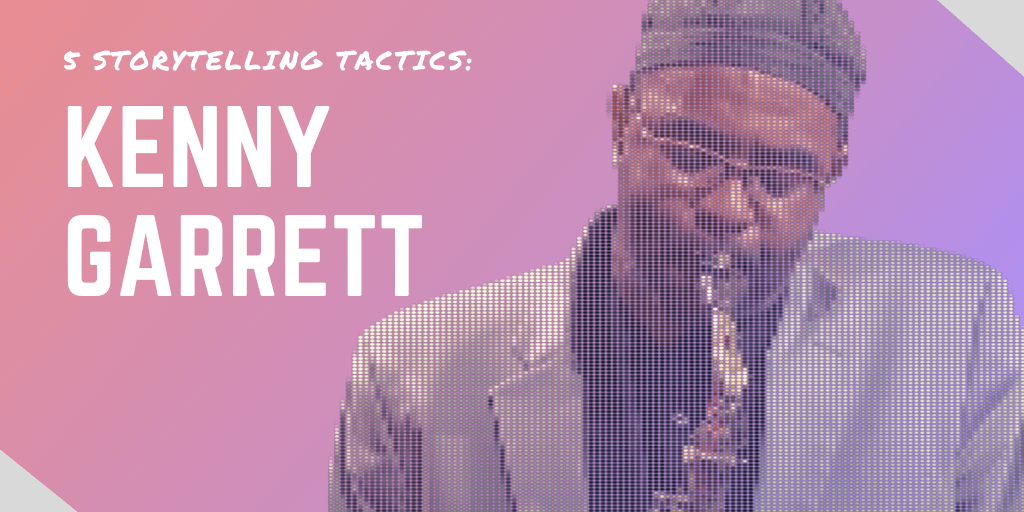 A perfect example of structuring you musical ideas in a story-like arc is Kenny Garrett’s solo on the tune Boperation by Fats Navarro.

…it’s a one chorus solo that tells a musical story from start to finish.

You’ll find this solo on the Freddie Hubbard/Woody Shaw album Double Take from 1985. Kenny’s solo begins at [1:45] in the video below, take a listen: 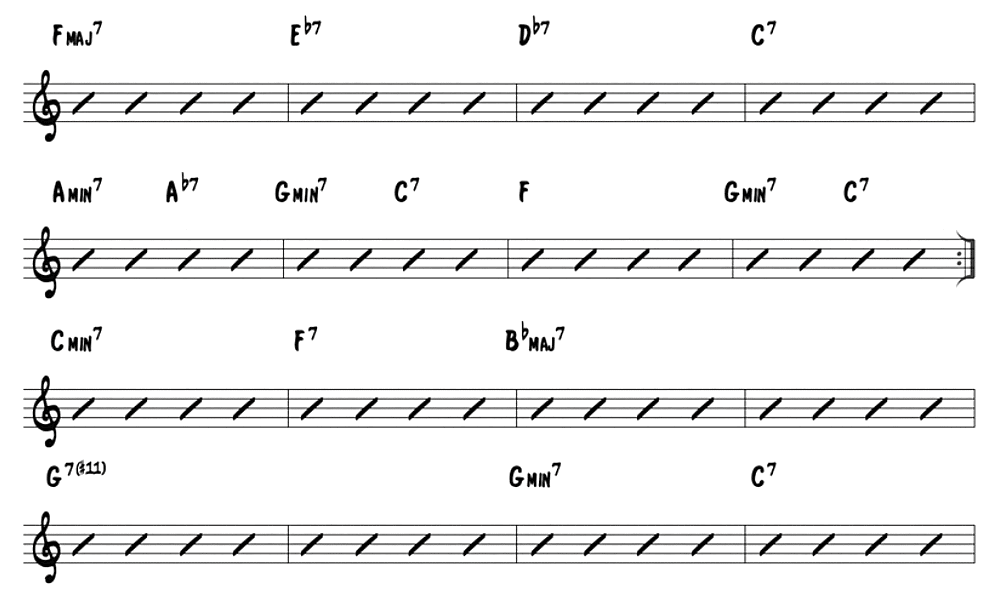 In the key of F Major you’ll find:

Nothing particularly unique here, but remember, improvising a great solo is all about how you create a musical story through the progression…

Take another listen to Kenny’s solo, this time at a slightly slower speed. Instead of listening for specific techniques, listen to how he develops the solo from start to finish:

Now how exactly do you utilize the elements of story to create a solo over this progression?

Let’s take a closer look at how Kenny utilizes the 5 elements of narrative arc to create a moving solo in the space of one short chorus. We’ll start with the first element…

Kenny begins his solo with this phrase…

The first thing to look at in his introduction is how he sets the stage by creating a musical “character.”

From the first note you know it’s Kenny Garrett, it’s his distinctive sound. He is creating an atmosphere for his solo and differentiating himself from the other soloists with his unique “character traits.”

Specifically, his freedom with the time and rhythm, laying back, and playing slightly under pitch. These are all elements that define his character and the mood of his opening phrase, setting the stage for the rest of his solo.

Next let’s look at some of the melodic themes Kenny creates. The first four bars feature a descending progression:

Rather than worrying about each individual chord, he plays a simple melodic idea that spans the entire progression:

To create this phrase he looking at where progression is headed, in this case the resolution to the I chord in the fourth bar. He also utilizes common or shared tones between these chords to craft a longer phrase.

The second part of this theme happens over a turnaround in F Maj:

Simple and introductory melodic ideas that are diatonic in the home key. In the second 8 bars he continues with another simple theme:

This time he plays the 5th descending to the 3rd on the F and Eb7 sounds and utilizes standard V7 language over the Db7 chord.

Every idea in his introductory statements is simple, yet effective in establishing his sound and story. This simplicity and diatonic approach also gives him room to develop and go somewhere as the solo continues.

At specific points in the first half of his solo, Kenny begins incorporating melodic and harmonic tension to develop and add interest to his opening ideas…

Check out how he concludes the first theme:

Here he is using V7 chords as points of tension that create forward momentum leading to his next musical idea.

In this particular line he uses the tritone sub of D7 (Ab) and highlights the b9 and #9 on the C7 chord before resolving to the I chord:

This introduces some harmonic tension that we haven’t heard yet in the solo and intensifies the resolution leading to the next melodic statement.

Next, look at how he concludes the second theme, again incorporating harmonic tension and rhythmic momentum:

On the Db7 chord he anticipates the upcoming C7 chord, then emphasizes the #11 on the C7, playing a D triad over C. To add to the harmonic tension he uses 8th note triplets:

Then over the final ii-V to F he plays a 16th note passage, adding rhythmic interest and creating momentum to the end of the phrase. Also notice how he again emphasizes the b9 and #9 on the C7.

Kenny reaches the highpoint of his solo on the bridge of the tune, playing the phrase below:

In this phrase Kenny utilizes the elements of harmonic and rhythmic tension to the fullest – moving away from the underlying progression and using double-time lines.

He begins with a B Major triad, a half-step away from the underlying C-7 (and tritone sub of F7). Then he moves to A Major material and G Major material…

Rather than playing a typical ii-V-I in Bb, he opts to plays outside of the harmony, creating a sequence that moves down by whole-steps. Notice how he uses chromatic motion to move from BMaj to AMaj, and later minor third movement to connect his lines.

In the second part of this line he delays the resolution to the I chord (Bb), playing C- F7 language on the downbeat of the chord before resolving to I:

Even though the Bb language is diatonic, he plays through it with 16ths notes to create rhythmic motion…even a major scale can be used in an interesting way!

After the excitement of the climax, Kenny brings things back down, returning to 8th notes and 8th note triplet rhythms…

On the G7#11 chord he emphasizes the #5, hinting at a whole-tone sound and then emphasizes the b9. Before returning to the A section notice how he highlights the #11 on the C7. 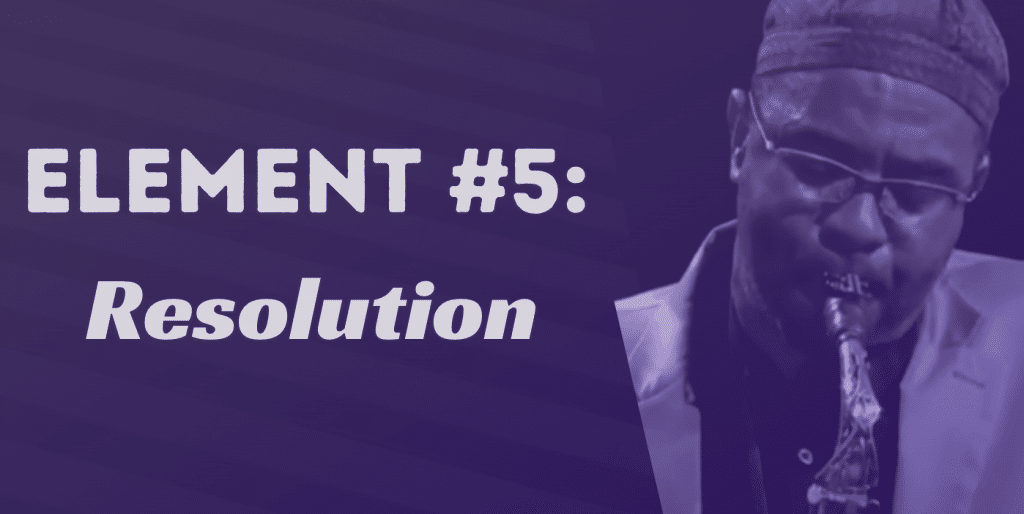 Over the descending progression he uses a simple melodic idea that he continues on each chord, again utilizing the common tones between each sound:

And finally, he ends with a melodic motif using the F Major triad plus the 4th.

Along with the ii-V’s, the chord symbols, and the melody, you should start thinking about how you can tell a story over the tune.

How are you getting from the first note to the last note of your solo??

How you can structure your ideas in a way that will create a musical story for the audience. How can you take the listener on a musical journey through the progression and leave them with a lasting impression?

It’s not just the notes you play that matter, but how you play them that will leave an impression on the listener.

Strive to add this story element to your musical approach every time you improvise!

But every solo should tell a musical story in some way!