We often talk about jazz language and how a primary way to integrate it into your playing is by applying that language to specific parts of tunes. By forcing yourself to use some piece of language over a tune in predetermined spots, your ear and your fingers learn how to put that piece of language into context. Gradually, the piece of language becomes something you can hear, access, and alter at will. It becomes a part of you.

Applying language like this is one way to work on tunes, but you can also apply general concepts to specific parts of tunes. I’ll label this idea as “concept application.” Pretty sophisticated, I know 😉

We get loads of emails everyday asking about how to learn tunes, how to solo better, and how to hear more clearly. The tactic of concept application seems to have slipped right by most people. It’s actually very simple and you probably already use it some of the time. All it means is taking some sort of concept and applying it to specific parts of a tune.

The latter part of this is where most people go wrong. They work on a concept in “isolation-mode” and never learn to apply it to tunes. For instance, maybe you’ve worked on some cool rhythmic idea or some sort of harmonic alteration, but it hasn’t revealed itself when you go to improvise. Did you ever apply it to a tune you’re working on? What good is a concept that doesn’t show itself when you play a tune? That’s where concept application comes in.

The various concepts to apply

The concepts you could apply are virtually limitless. In general, they fall into: rhythmic concepts, melodic concepts, or harmonic concepts (I say “in general” because there are more abstract concepts one could apply, such as playing “colors.” I’m not sure exactly what this would mean, but I just wanted you to know that things aren’t necessarily limited to what we commonly think of as the aspects of music). They are not mutually exclusive either, meaning a concept could be both rhythmic and melodic.

An example of a rhythmic concept: Using a specific rhythm

An example of a harmonic concept: Playing the flat 9th over a dominant chord

An example of a melodic concept: Primarily using a particular interval in your lines

Knowing the head and chords to a tune is a good starting place, but really does not provide anyway for you to solo over it successfully. That’s where a lot of confusion exists. People think that if they learn the head, know what the chord changes are, and can arrpegiate the chords and play the scales then they’re good-to-go. Some how, from this knowledge, you’ll hear beautiful melodies and they’ll instantly come out on your horn, right? Nope. Sorry. I wish it were that easy.

Unless of course you’ve spent time on tunes that are similar to the new one you’re approaching, in which case all your knowledge from your previous work will translate to the current tune you’re working on. That’s why Eric wrote about working on these specific tunes because if you work hard at one tune that has many progressions that you’re likely to encounter in the future, you’ll be able to approach all these future situations successfully with minimal additional effort.

So, to clarify, learning tunes, practicing tunes, or soloing well over a tune (those are all synonymous) is NOT achieved by memorizing the head, the chord changes, learning the scales and arpeggios, and going-for-it. That is background knowledge for a tune. A starting point. A given.

What we really have to do is figure out how our heroes worked through these progressions. We have to learn the ideas (language) and apply the concepts they used (concept application), then integrate them into our playing and build upon them.

The importance of language when applying concepts

Here’s another stumbling block I’ve encountered when starting to apply concepts to tunes. Without having language, it’s difficult to formulate lines using concepts. In other words, to use concepts effectively, you still need a solid idea of the inner workings of great jazz lines.

Without that understanding, gained from learning and studying language, you’ll sound like a theoretician when using some sort of concept you want to improvise from. If you can create fluid lines in the jazz idiom because you’ve studied how the masters did it, when you start to improvise from a more conceptual basis, you’ll continue to create fluid lines that still lay well in the genre.

How to use concept application: step by step

Your concepts can come from anywhere. If you’re like me, they’ll most likely come from one of two sources. Either yourself or a recording. Sometimes I’ll be practicing and something just dawns on me. I’ll write it down and add some text to it so I know what I was thinking when I look at it later and get back to practicing. Other times, I’ll figure out what one of my heroes was playing and extract a concept based upon that.

One of the constraints you will impose is the mere use of a concept. The other constraint is where you will use it within a tune. For example, perhaps the concept we want to apply is a melodic concept: Improvise based upon the melody. I know it sounds simple, but it’s often overlooked and very powerful.

Now we have our concept. Then, all we need to do is pick a tune and where we want to apply the concept. A great tune to try this particular concept on is All The Things You Are…and you could apply this concept to the entire tune. Or perhaps try applying it every 8 bars, or every 4 bars.

Another clear example of concept application comes from Integrating New Rhythms Into Your Playing. In fact, that article is the exact process of concept application, and more specifically, rhythmic concept application. The process as illustrated in that article is fairly straightforward. You transcribe something from your heroes, understand what they were doing, extract a concept, and apply it to specific measures of a tune. So, from the ideas in that article, you could take a Miles solo, transcribe the rhythms, look for something that sparks your interest (this is the concept), and apply it to a tune you’re working on.

From that solo, I like how he uses a half-note that occupies beats 2-3 as shown in the example below. I may then take that idea, playing a half-note on beats 2 and 3, and practice a tune by using that concept in predetermined places throughout the tune. 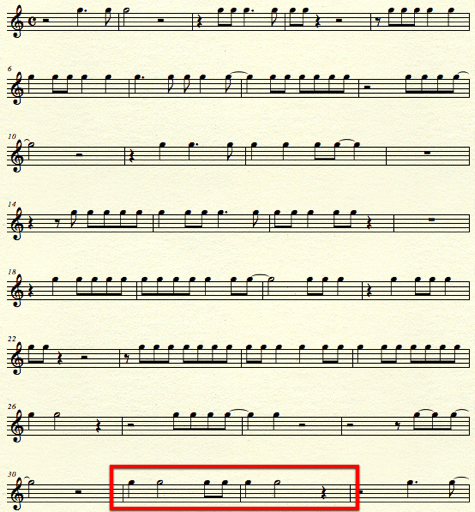 It’s good to start by going overboard. Use the concept as much as possible and then gradually back off until you’re using it in a more natural and realistic manner.

The key is to experiment and change up how you apply concepts to tunes until you own them, just like how we talk about owning language. And similar to learning language, it’s better to know a few concepts inside and out than dozens in a shallow manner.

Concept application as a framework for practicing tunes