Music is the space between the notes – Claude Debussy. The use of space is what defines our lines. Learning how to control our use of space allows us to define our lines precisely how we want to. To gain this control, we must focus our attention on where we rest.

Most of our practice time is spent playing and not resting. For many, it’s actually difficult not to play. It’s difficult simply because we haven’t spent time on it. The following exercises will focus on three areas of the use of space:

Diligently practicing using space in these three different ways will expand the way you hear and play.

Using space after a line

We do not want to sound like that. Using space after a line guartantees the separation of your musical ideas, giving them each a clearly defined area to live in.

How to practice using space after a line

All the exercises in this article use the idea of concept application. The basic idea is: you’ll pick a tune that you’re working on or a blues, impose some constraints, and solo over it paying close attention to the way you use space. In each exercise you’ll use space in a different way. Through this process, you’ll learn to use space more effectively in your improvised solos.

For this first exercise, you’re paying close attention to how you use space after a phrase. Start with big chunks of rest.

Lets take a blues. Starting in the first measure, play a one-measure idea followed by three bars of rest. Don’t get too artificial about it. What I mean by artificial is, your ideas do not have to start right on one. And feel free to play pick-ups before an idea or tag notes onto the end of an idea.

Here’s an example of playing a one-measure idea and then resting for three measure. Again, use these numbers as loose guidelines.

After experimenting with some other combinations, try not limiting your lines to a particular measure amount, but still limit how much you rest. So, maybe you choose two-measures as your amount to rest after an idea, in which case, after every melodic idea you play, rest around two measures. Again, use it as a guideline and make it sound musical.

Using space before a line

Learning to control the space before a phrase creates a sense of intention in your lines. A simple way to practice using space before a phrase is practice starting lines from different parts of the bar. I talked about this in Developing a stronger sense of time by using a metronome on 2 and 4. Here’s one way of how you could take a phrase and start it on different parts of the bar, essentially varying how you use space at the beginning of an idea. . 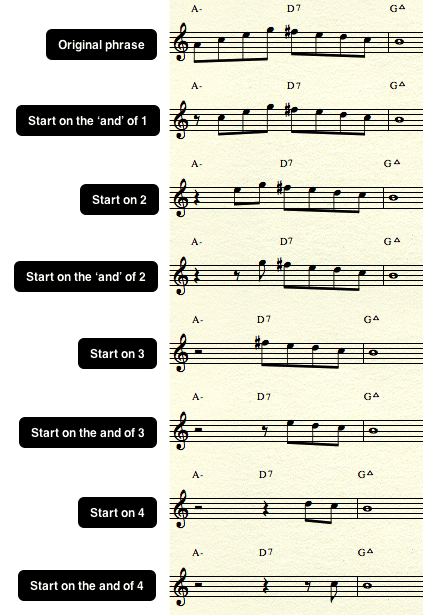 How to practice using space before a line

Just as we did before, I’ll use a blues to illustrate how to apply this concept of using space before a line. First, select one of the 7 variations from the above example (not the original phrase). I’ll use the third line from the example (start on ‘2’). Then, predetermine where you are going to play an idea. For the example below I’ve decided I’ll play an idea starting in measures 2, 6, and 8. Here’s what that looks like:

Using space within a line

When you use space within a line, you want to be careful not to use too much because you want to keep the continuity of the single line. Listen to Coltrane on Fifth House and pay close attention to how he uses small amounts of space within each line he plays.

How to practice using space within a line

To learn to use space within a line, practice inserting eighth-note and quarter-note rests into the middle of an idea. Greater rest lengths than these will tend to break up your lines in to two separate ideas.

Again, I’ll work through an example with you over a blues. It helps to predetermine where you’re going to play your lines, that way you can simply focus on the task at hand: using rest in the middle of a line. Lets say I’m going to start my lines in measures 4 and 8. They can go any length as long as they use space within the line and pickups are still fine.

And lets say I’m going to use only eighth-note-rests (when using concept application as we’re doing in all these exercises, it helps to be as specific as possible with your constraints. You can always remove them later.) Here’s an example of using eighth-note-rests within lines:

Experiment with where you place the rest within the line and try both eighth-note and quarter-note rests.

Studying the master’s use of space

Make up your own exercises using the concepts illustrated throughout this article to practice using space before, after, and within a line. As you start to become more aware of how to control how much space you use and where you use it, you’ll hear with greater clarity how the master’s use space. Studying Miles,  Ahmad Jamal, or any other master will take your understanding of space to new heights.

Miles Davis was a complete master of space, whether he played fast…

Ahmad Jamal is constantly described as the master of using space.

And no need to limit yourself to the masters of jazz. Listen to all the masters of music and remember what Debussy said, “Music is the space between the notes.”

The Secrets Behind Herbie Hancock’s One Finger Snap Solo (Premium)