Why create your own exercises?

When I was 16, I had the privilege of meeting and talking to saxophonist Sam Rivers. You likely don’t know who he was, but he was pretty awesome and had a very unique way of playing and composing.

I’ll never forget what he told me about his own musical journey. He said:

“Eventually I realized I had to make my own exercise book.”

By creating your own exercises, you apply your own creativity, you cultivate what is yours, you develop things in your own way, you move closer toward your unique voice.

Conversely, learning someone else’s exercises, can move you further in their direction, closer to their concept, possibly away from your own ideal. Not saying you can’t practice other people’s exercises, but, just be aware that they’re going to take you in a certain direction and make sure that’s the direction you want to go.

So making your own exercises is a great way to go. And, the good news is, you don’t need to start from the ground up. You can easily build upon what’s come before you by transcribing some lines and using them to inspire your exercises.

Why not create jazz practice exercises straight from your head instead of stealing from someone else, I mean, after all, aren’t we trying to be unique and creative? When we transcribe aren’t we copying instead of creating?

First off, to clear things up, yes, you can create exercises straight from your head. Not everything you do has to be rooted in transcription.

If you’re practicing one day and you stumble upon something that sounds really good to you, write it down. Take it through all the keys. Make an exercise out of it and figure out how you can apply that knowledge to chord progressions and tunes you perform.

So why do we emphasize transcribing so much if it’s perfectly okay to create your own exercises from your mind?

It all goes back to the fact that jazz is a language. If much of what you play is not rooted in the jazz language on some level, well then you’re not going to be speaking the language. A surefire way to learn and absorb the jazz language, while simultaneously building upon it and playing it in your own way, is to use what you transcribe to inspire the creation of something new.

And, it doesn’t always have to be new or that different. As you’ll see in my examples, some of the exercises are just a piece of the line played around the cycle. Things don’t have to be difficult or complex to have value. Don’t over think it.

Okay, now that you understand that transcribing your heroes can be an effective way to inspire your own creative genius, I’m going to walk you through the process with a Sonny Rollins line I transcribed from the album Saxophone Colossus, the tune St. Thomas. 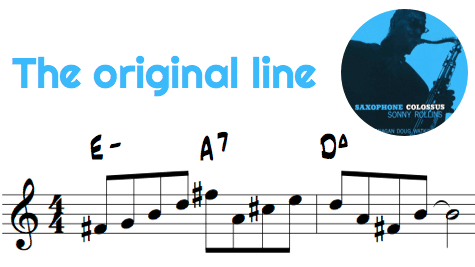 The line occurs right around 1:20

To make it more clear to hear, I’ve slowed it down for you.

And here I’ve slowed the piece of the line to 25% speed, repeated 5 times for you:

Anytime I transcribe, learn a tune, or interact with a recording in anyway I use Transcribe. Their site sucks, but their software is awesome.

Let’s backup here for a second. So, I heard a piece of a Sonny Rollins phrase I liked. I put the recording into Transcribe and I transcribed it by learning it on my horn first.

All of this so far requires that you have good ears. If you can’t hear the line clearly and the chords and the root movement, learning any line is time consuming and very difficult. The fundamentals of ear training that we share in The Ear Training Method are what give me the ability to transcribe quickly.

If you’re having trouble, grab a copy of that, or start finding the time to sit at the piano everyday and practice your ear training fundamentals. Without these basic skills it makes your life a lot harder.

Ok, once I’ve got the line absorbed and I understand the chord structure the line is used over, I can start thinking about how I want to make use of it. I can:

And so on and so forth. The point is, I now have a piece of jazz language that I can then build upon to create my own exercises. Let’s go ahead and craft our first exercise.

Before you go and try to print all the exercises, I’ve made it easy for you by putting them all into a handy free downloadable PDF, so grab Your guide to making exercises from transcribed lines before going any further.

I’m going to take the first part of the line over the minor portion, extract it, and slightly mold it to create a small melodic fragment that sounds good by itself over a minor chord. I’ll then take my new minor language and practice it in descending half steps.

Descending half steps is one of my go-to root movements that I like to use because of the way it sounds, but you can use any root movement you like. Descending whole steps, ascending minor thirds…

Here’s what this exercise looks like and remember, grab the free downloadable PDF:

To me, this line sounds like something George Coleman might play. Check him out playing on the Miles Davis album Four and More.

One thing to point out is that ideally you do not read the exercise from the page. Really you want to be able to take the line you’re working on around the root movement you’ve determined, all in your mind.

I’ve written out the exercises for you to get you started, but reading them is only the beginning. Get to the point where you can take a line through the keys without writing it down.

The trick to this is knowing how to visualize. If you can’t clearly and effortlessly visualize it, you can’t play it. I can’t emphasize this enough. The whole time when I’m practicing, I’m trying to achieve a clearer picture of what it is I want to play, in my mind. The instrument is simply an amplification of what’s going on in my mind. Sometimes it’s the body teaching the mind, and sometimes it’s the mind teaching the body, but the goal is the same: to strengthen the connection between body and mind, and the information that you want to put there.

In this second exercise, I’ve taken the first part of the line and combined it with chromaticism to resolve to the tonic. The main purpose of this exercise to me was to introduce more chromaticism into my playing.

A good way to think is in terms of what you want to add to your playing. I want more chromaticism, so, I used the Sonny line as inspiration for a line that would add it to my playing.

Here it is written out for you: 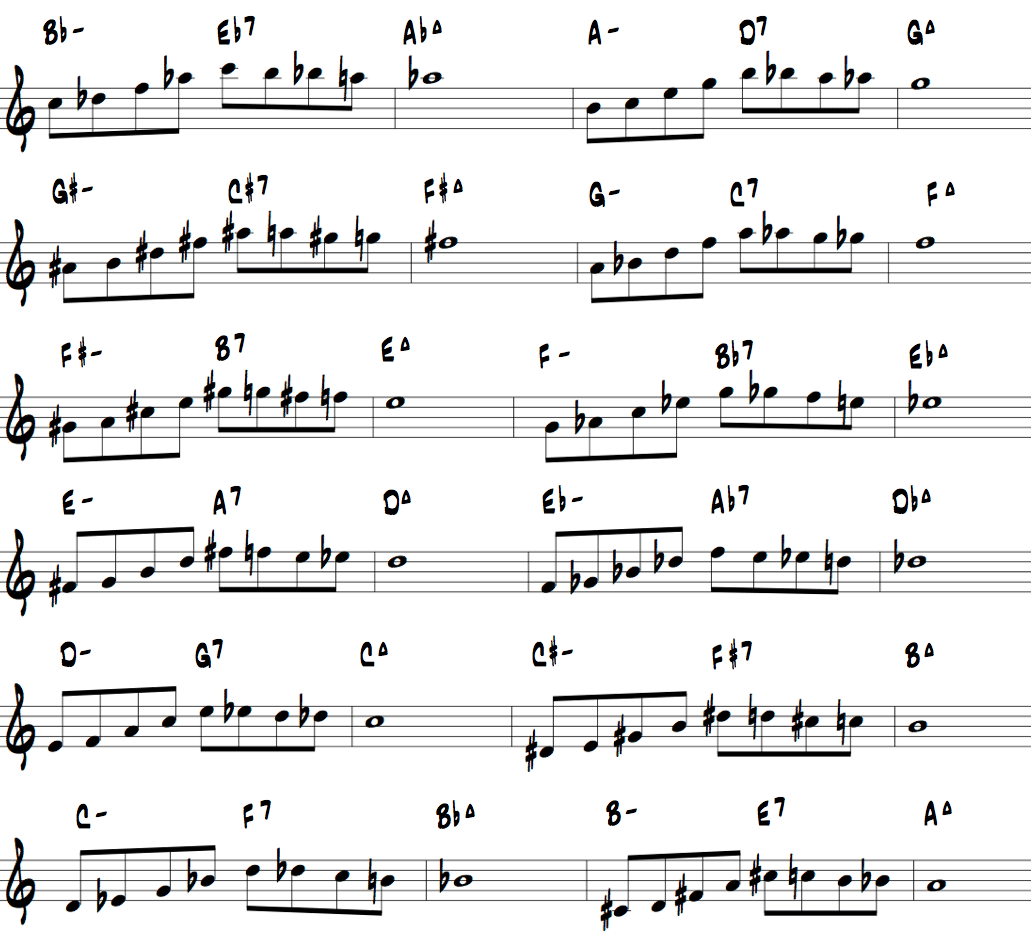 Always have a point for each exercise you practice.

Again, let’s use the first part of the Sonny line to inspire a new piece of ii V language. Here’s what I came up with: 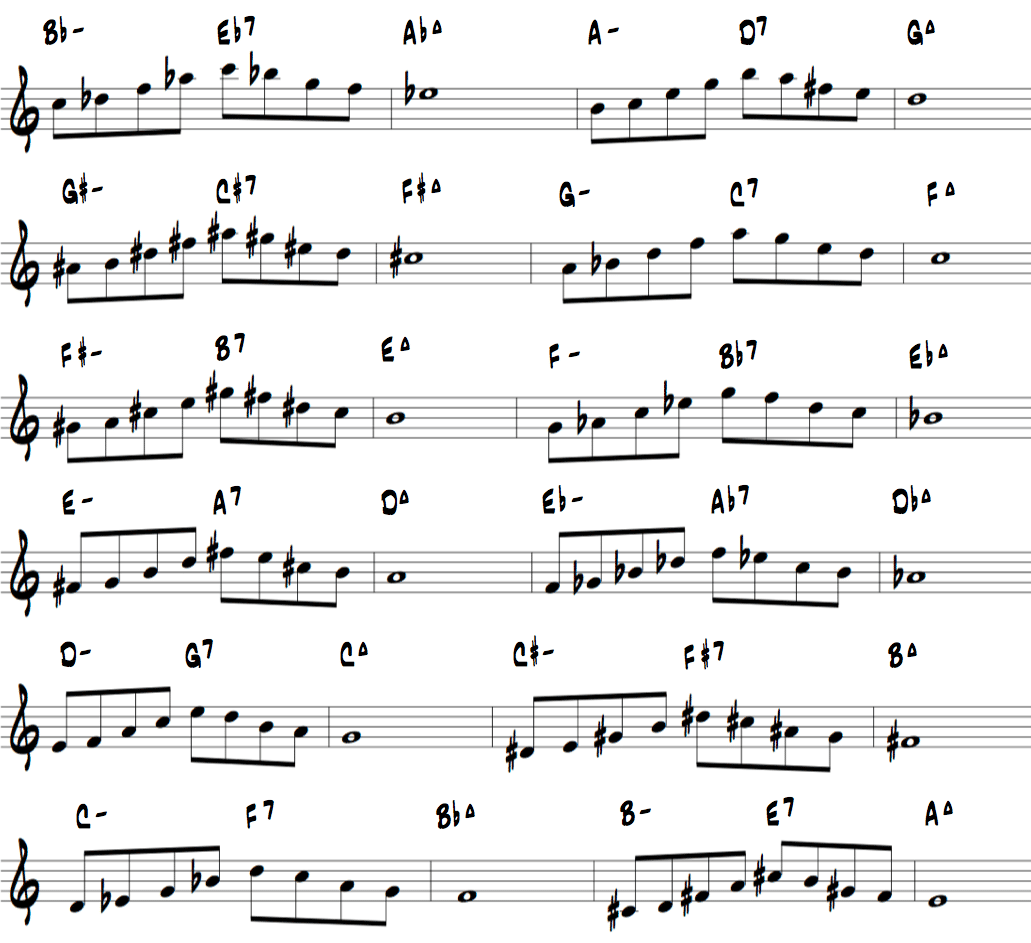 This is a great versatile  ii V that we can use all over. It has a nice ascending and descending balance, and it lays well all over the instrument. Turns out it’s a common sound you hear a lot of pros play: the natural 13 and 9 over the dominant chord.

As I mentioned, a lot of pros use this sound. Listen to this Vincent Herring video and see if you can spot it:

Now that you’re accustomed to this sound, you’ll definitely hear some of your favorites playing it a lot.

Becoming fluid over a particular chord quality takes time. As I mentioned before, it all goes back to what you can visualize in your mind. A great way to challenge yourself is to practice things in different root movements.

Up to this point, every root movement has been descending half steps. Now, we’ll extract the dominant part of the Sonny line and play it in descending minor thirds.

There are three groups of four key centers to practice. Not easy, but if you learn to visualize the root movements, the more you practice, the easier it will become.

Practicing a short line like this will give you great facility with it.

For this last exercise, we’ll simply extract the major portion of the line and play it around the cycle. Notice that a lot of creating a new exercise is just taking a piece of a line out and isolating it.

The reason this isolation works is because it’s much easier to learn, practice, and apply small pieces of language than long lines. In general, breaking up a line into units of two beats or one measure will give you some great things to work with.

It’s kind of like the learning the word antidisestablishmentarianism and then breaking it up into its various parts and learning how to use those in new contexts.

That’s essentially what you want to do. Sure, you can use the full word antidisestablishmentarianism occasionally, but it’s way more beneficial to grab each of its parts, isolate them, master them, combine them with other things you’re learning, and apply them to new situations.

Transcribing lines and making your own jazz exercises

So if you followed along, you should have a pretty good idea of how to go about transcribing a line from one of your heroes and then crafting your own unique exercise from it.

Through this process, you should have a clear idea of what you’re trying to accomplish with each exercise you create. For these 5 exercises, my goals were:

As I said before, don’t overthink it. Go transcribe something you like and rip it apart. Figure out what’s going on and what you want to do with the information that you’re discovering. If you start with a great line as we did here, it makes your job pretty easy.

Make sure you download the free PDF of all the exercises. With a little practice and creativity, you can start creating your very own jazz exercises that help you develop and liberate your musical voice.