IWe all have lines we use frequently. Some lines we use so much, that we can’t stand them, criticizing ourselves for playing them over and over, thinking we’re being unoriginal and uncreative…

It’s ok. Even the masters repeat themselves often. When you’ve got some specific language to this point, where it’s coming out naturally and spontaneously but too much, that’s actually a good thing. It means it’s becoming yours. But the mistake most people make is they stop there, thinking that now they need to figure how not to play the line so much.

Instead of trying to rid the line from your vocabulary, learn to apply concepts to your playing that will morph the language you’ve learned into something new.

Enclosure is one such concept that can transform your stale lines into something exciting and inspired.

Enclosure is quite simple. In its most basic form, a chord tone is selected and the surrounding notes below and above are inserted before the chord tone. The inserted notes can be related chromatically, diatonically, or both. In the examples below, the first is enclosed diatonically (within the key of C) and the second chromatically (it just so happens that the 4th lies a half step above the 3rd, making this diatonically related note chromatic as well)

You hear enclosure used everywhere, especially when bebop was at its height. Charlie Parker loved this device and used it all the time. Listen closely to his solo on Kim and you’ll instantly hear it:

Keep in mind, there’s all sorts of variation possible with enclosure…

A world of enclosing possibilities

Which chord tone you enclose – You can enclose any chord tone you like, just pay close attention to the sound of the result and make sure it’s what you’re going for in that particular situation. Here I’ve enclosed an upper-structure chord-tone, the sharp 11:

The direction of the enclosure notes – above-below or below-above:

Whether the enclosure notes start on the downbeat – (as in the previous examples), or the upbeat:

How many notes you use in your enclosure – Two, Three, and four are all common:

Which enclosure notes are diatonic to the chord and which are related chromatically, or even intervallically – (as shown in this example): 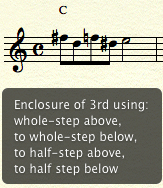 …And those are just SOME of the possibilities!

My advice is to always start with the absolute easiest application and work up from there. Take a blues and practice enclosing the root or the 3rd on each chord. Then try the 5th, followed by any other chord tone you wish. In this example, I simply enclosed the 3rd starting a half step below, except on the ii- chord, I chose to start a whole step below:

So if you remember, I began this conversation talking about how enclosure is a device that can and will give your tiresome lines that you’re bored with–but have full mastery of–new life. You’ve seen in the prior examples how creative you can be with the sheer technique of enclosure, but applying it to your vocabulary while you improvise is when you’ll see the magic at work. This is what I’m talking about in the title of this article: How to effectively use enclosure. Many people know what it is and practice basic exercises like the one over the blues, but making it part of your language is the goal. Here’s three ways to apply enclosure to your language…

For these exercises, select any line you play too much. Here’s our “original line” for the examples:

Using enclosure at the beginning of a line – Yes, you may be thinking that this is “no big deal…” But keep in mind, these two notes get your phrasing over the bar-line, get you starting lines not on beat-one, and push you into the flow of the line, all the way towards the resolution. Simple, but effective:

Insert it in the middle of a line – I adjusted the original line slightly to fit the concept. Again, looks are deceiving. Adding this enclosure to the middle of the line turns the vanilla-line into something  even Parker may have actually played:

Using enclosure at the point of resolution – And one more time we see how this simple concept of enclosure adds a lot to a line:

These three simple techniques of using enclosure in your lines are so easy to start working into your playing and will greatly help you improve upon the lines you’re bored with. They’re just a starting point. Use these ideas to build your own ways of using enclosure.

You can practice consciously using any of these tactics in a specific manner as presented over the blues in the previous exercise, or try improvising with the concept in mind, applying it when you hear and feel it. Of course, as always, go back and figure out how the masters use enclosure. It’s a core part of their overall-concept and with a little effort, it will be part of yours too.