Contrary to all the stories you hear or the pressure you might feel, you don’t have to conquer huge goals or create drastic change within the space of a thirty minute practice session.

In fact, approaching music with this expectation can be discouraging and even counter-productive!

However, to start making improvement each day you need to make a conscious shift in your mental approach – from broad goals and insurmountable tasks to specific techniques and musical concepts.

Aim to narrow down your goals, define your focus, and isolate one concept, one section of a tune, or even one chord and master it…

With this approach to your practice you’ll quickly make progress on your musical problems and improve your playing.

In today’s lesson we’re going to show you how, isolating one important musical progression and studying 5 techniques from 5 master musicians.

Focusing on V7 to I

You’re probably thinking…why focus on the V7 chord resolving to the I chord??

With all the stuff that you have to practice, why should you spend your precious time on two simple chords?

Well, when you look at the big picture of the jazz standard repertoire, you’ll find the same chords and chord relationships over and over again – and one of the most prominent is a V7 chord resolving to I.

Take the Blues for instance:

In the space of 12 bars, you’ll encounter V7 moving to I five times! And in this example of John Coltrane you can hear him utilizing this relationship to shape his lines. But it doesn’t stop there…

Think of your favorite jazz standard or choose one at random and you’ll find a dominant chord resolving to a I chord. It Could Happen to You…V7 to I, Giant Steps…V7 to I, Rhythm Changes…V7 to I.

It’s one of the most common and important chord relationships in the jazz repertoire, and to successfully improvise over it in your solos you must develop specific musical techniques for this chord movement.

Instead of talking about scales and music theory definitions, today we’re going to focus on language.

…musical ideas and concepts taken directly from the solos of master musicians.

Remember, there are dozens of things that you can learn from the solo of a great player, from sound & phrasing, to rhythmic patterns & melodic devices. Even one musical phrase can yield important techniques that can change your approach to music!

Below we’ve selected 5 master musicians and isolated a single spot in their solos, a particular passage where they are playing over V7 resolving to I.

Some of these techniques are simple, some are advanced, some are harmonic, and some are melodic – but every one of them can transform your playing…

1) Clifford Brown: Arpeggiating from the 3rd of V7

The first V7 to I technique we’ll look at comes from Clifford Brown. Take a listen to his solo on Stompin’ at the Savoy…

Let’s focus on the Bb7 chord resolving to Eb-. In this line Clifford begins on the third of the V7 chord, arpeggiates up to the b9, then resolves down to the 5th of the I chord:

This ascending diminished arpeggio from the 3rd of the V7 chord to the 5th of the I is a fundamental, yet important structure that should be ingrained in all keys – one that you can use in countless tunes and in many variations.

Start by visualizing this pattern of V7 resolving to I in each key, then ingraining it on your instrument:

Once that feels comfortable, practice applying it to the V7 chords in the tunes you are practicing and performing.

Next create variations with this structure, incorporating other language and techniques that you know. For example, you might alter the original line with the b9 and #9:

The harmonic, melodic, and rhythmic possibilities are endless…but it all starts with mastering the basic structure in all keys!

The next V7 to I technique comes from the great Charlie Parker, specifically from his 1943 solo on Cherokee. Take a listen:

In the final chorus of his solo, [2:23 ] in the video, Parker plays following line. Focus on how he navigates the from G7 chord and resolves to the CMaj chord:

There are two important concepts (among many) that you can take away from this line:

Let’s start with the first technique…

When you encounter a dominant chord in your solos you don’t have to limit yourself to mixolydian scales or the written chord tones. To create more melodic and harmonic interest you can imply the related ii-V leading to I.

For instance, rather than playing a dominant chord (G7) for two bars in this line, Parker implies the related ii-V progression (D- G7) on top:

This is a technique that is used by great players over and over again and one that you should absorb into your playing. Start by visualizing the related ii-V over V7 chords in all keys: 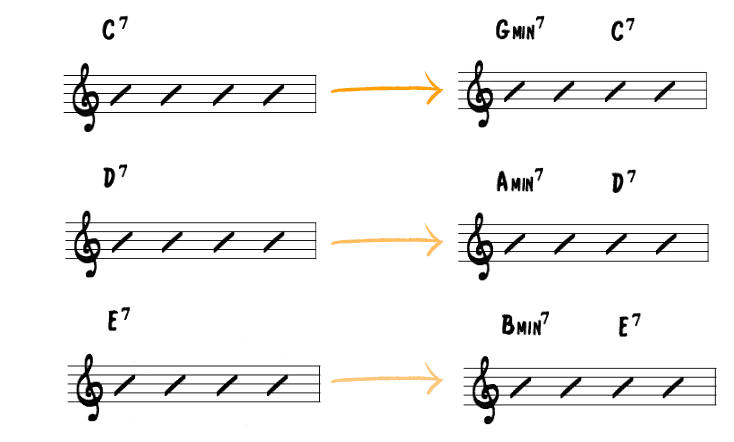 The next step is utilizing ii-V language and techniques that you have in these spots. Don’t have any ii-V lines?? Check out this lesson!

For instance if you see an A7 chord moving to D Major, you’d first visualize the related ii-V, then apply your ii-V language and concepts…

This technique can be applied to any V7 chord in the tunes you play. Try it on Donna Lee or the bridge to Rhythm Changes, or tunes with extended V7 chords like Sweet Georgia Brown or One Finger Snap.

Other V7 options that resolve to I

The second part of the line we’ll focus on is the last bar of G7. Here Parker utilizes two simple, but important dominant techniques:

The first is a Bebop scale, descending from the 3rd of G7 to the b7. This is a basic, but essential device that you need to ingrain in all keys.

The second is emphasizing the #5 of a V7 chord, playing an augmented triad that resolves to the 9th of the I chord. Again common device in the jazz language that you need to know!

Both of these concepts can be used to move from a dominant chord to the I chord. And as you can with all techniques, Parker combines these concepts into a single phrase – in the blink of an eye!

The third technique we’ll look at comes from John Coltrane and his famous solo on Moment’s Notice. Take a listen:

This is the classic Coltrane diminished pattern that you’ve probably heard before. Over a what is essentially a Bb7sus resolving to Eb, he utilizes a Bb diminished pattern. This is an important structure that you should know in all keys and variations.

Start with the standard diminished arpeggio (minor 3rds stacked), then play a whole-step below each note, shown below over C7:

Do this in every key. Next, practice the pattern that Coltrane plays in his solo through all the keys, starting on different diminished “chord tones.”

When applied to a dominant chord, this pattern not only emphasizes strong chord tones like the root, 3rd, 5th, 6th and b7, but also highlights the #9, b9, and #11.

Explore the different ways that this pattern can resolve to the I chord, landing on different chord tones like the 3rd, 5th, or root:

There are hundreds of possibilities when it comes to applying diminished structures to your solos. Check out this lesson to explore some more diminished patterns, and for a more in-depth practice resource, get the Jazzadvice Diminished Handbook for premium members.

The fourth V7 to I technique comes from tenor great Joe Henderson. Check out his solo on the blues Computer G from Kenny Garrett’s album Black Hope:

We’ve written out the second chorus of Joe’s solo below. Pay special attention to what he plays in the highlighted measures: 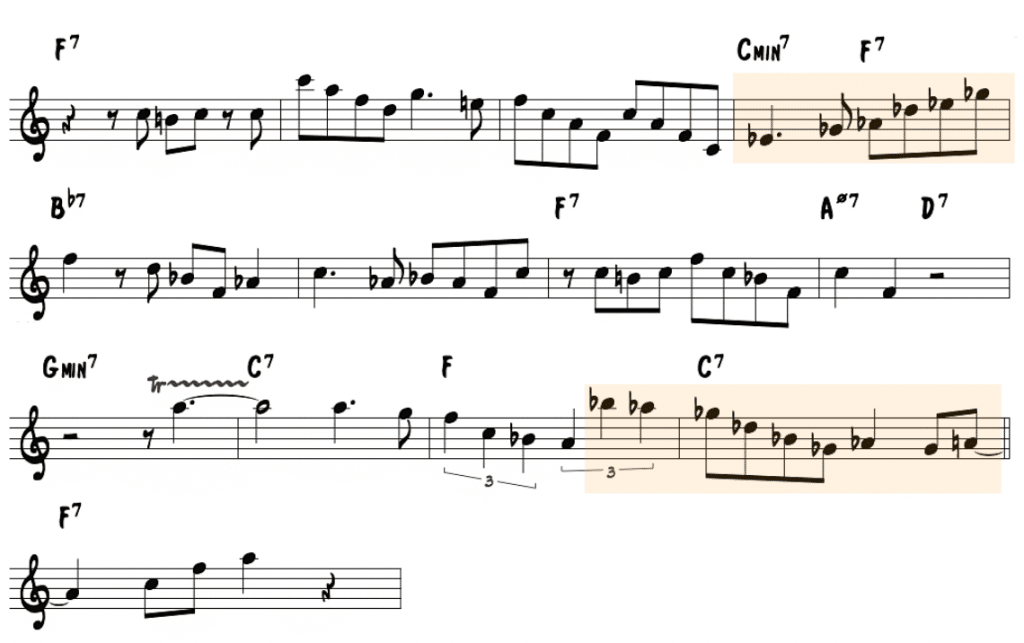 While at first it may seem like he is using a special scale, altering the notes, or simply playing outside, he’s actually using one of the most common substitutions for dominant chords.

In the fourth bar, instead of an F7 resolving to Bb7, he plays a B7 chord (written enharmonically here):

Remember, tritone substitution isn’t just a theory definition, it’s something that you need to hear and have language for.

In the practice room start by visualizing a dominant chord and it’s tritone sub (C7 -> F#7). Then practice applying dominant language from the tritone sub over the original chord…

The final V7 to I technique we’ll look at comes from Mulgrew Miller, from his solo on If I Should Lose You…

At [3:00] in the video, Mulgrew plays this line over a C7 chord resolving to F Major:

At first glance it looks like Mulgrew is simply altering the notes of the dominant chord (b9, #9, b13) as we saw in previous examples. However if you take a closer look, you’ll see that he is thinking of a particular structure.

This is a great technique for altering or substituting the V7 chord in a melodic way.

*This is actually a tritone substitution variation!  The tritone sub of C7 is F#7, and just like any other V7 chord, you can use the related ii chord ( C#- ) on top.

The key is the concept or way that you apply this sound to dominant chords and resolve to I. Rather than a scale or a theory concept, you have a melodic approach to this sound.

…the descending b2 minor triad has shape and a melodic structure, and resolves nicely to the 5th of the I chord.

Again follow the same steps as we covered above to ingrain this technique into your playing: visualize it, ingrain it on your instrument, and apply it to the tunes you’re practicing.

5 Techniques – a world of possibility

No matter which jazz standard you choose to play, you are going to run into a V7 chord resolving to a I chord.

…and the more techniques you have for soloing over this chord relationship, the better your solos will be.

The five techniques we covered in this lesson are just the beginning. Each melodic and harmonic concept from the players above is a door to a world of musical information – so make sure you spend the time to master each one!

Remember, understanding the theory or reading the music is just the first step. When you get into the practice room, turn on the recording, and start to play through this stuff yourself is when you’ll truly begin to understand this music! 😉