Every serious improviser has to deal with the blues. From the players just starting out in school, to the musicians at local jam sessions, to the biggest names performing on international stages. Because the blues goes hand in hand with creating music in the moment. But unlike many players think, it goes beyond the blues scale, memorized licks or even the 12 bar progression…

The blues is about making a musical statement – telling a story through the lines you play. Rather than thinking about notes or theory, it’s the sound, style, and feel of what you’re playing that matters most.

And this is an essential skill that every improviser must develop…

Today we’re going to take a lesson in the blues from one of the most swinging and melodic players out there – the great Wynton Kelly.


Wynton Kelly only played one tune on Kind of Blue…

But it’s a solo that sticks with you. One that you start singing without even realizing it.

He has a swinging, bluesy, melodic style that can’t be notated on paper. And like all masterful improvisers, something special happens when you turn on the recording.

You don’t think about notes, technique, or music theory when you’re listening to him improvise – you hear music.

I’m guessing you’ve listened to this solo before, but if you take a closer listen you’ll discover that he is using some key concepts to create a masterful solo over the blues.

The one thing that many improvisers forget, from beginners to advanced players, is this…

…that a great melody doesn’t have to be complex.

Think about every iconic pop song, the most famous classical compositions, or even the theme songs to your favorite movies – they are surprisingly simple.

And many of the greatest improvised jazz solos are crafted from simple concepts too – an interval, a rhythmic motif, or a chord progression – yet applied in very creative ways.

And this is exactly what Wynton Kelly does in his solo over the blues. Check out the opening chorus:

If you take a look at the skeleton of his first musical statement you’ll get this:

When you take away the embellishments, you’re left with the notes of a Bb major triad played over a Bb7 chord. Pretty simple, right? However, this brings up an important point…

You don’t have to start with long eighth note lines, complex scales, or advanced harmonies to construct a great solo – you can make music with something as simple as a triad!

Now take a close look at how he creates melodic statements with these triads by adding a few simple musical devices. In the opening 4 bars of his solo he utilizes enclosures, chromatic approach notes, and incorporates the 6th scale degree:

These stylistic devices can completely transform a simple interval or a triad into a line that sounds like music. Take a look at how he employs these concepts in the remainder of his chorus:

If you focus on the highlighted notes you’ll notice that he uses the 4th scale degree as well as the 6th scale degree to augment the basic triad and where he uses chromatic approach notes to emphasize chord tones.

These are surprisingly simple concepts that he deftly uses to create polished melodic statements – adding a single note or even some chromaticism to the basic structure of the chord.

In his opening chorus Wynton also introduces a harmonic motif that he continues throughout the rest of his solo. Over the Ab7 chord in the last two bars of this chorus he emphasizes the #11:

The #11 has a very distinctive sound over a dominant 7 chord and you can access it with a few different approaches.

You can use a…

Practice accessing the #11 from each of these approaches.

Start by visualizing these 3 triads and arpeggios over dominant chords, ingrain them in all 12 keys in the practice room, and work on applying them to the V7 chords in your solos.

The 2nd chorus: Develop your ideas


Another characteristic that you hear in all styles of music, from popular tunes on the radio to the great symphonic works, is repetition.

Musical ideas that are repeated, a chorus that returns, and themes that are developed in new ways. And this is true of the best improvisers.

The short blues form naturally lends itself to repetition and development. In the second chorus, you hear Wynton expanding on the concepts and themes that he introduced in the opening chorus.

One technique that he continues is embellishing the major triad with the 4th scale degree. Take a look at the line below:

Just as he did with the 6th scale degree, here he inserts the 4th scale degree into a Bb triad to emphasize the 3rd and create linear motion.

Another device that Wynton uses to create interest and development in his solo is rhythm. By using triplets, turns and 16th notes in his lines he creates swinging lines that are much more rhythmically interesting than plain eighth notes:

Over the Bb7 in the 7th bar he creates a double-time line using the same devices as before (chromatic approach notes, the 4th and 6th degrees, and enclosed goal notes) – just played at twice the speed.

Another motif that he continues to develop in this chorus is emphasizing the #11 over V7. Here he implies the #11 sound in two places: 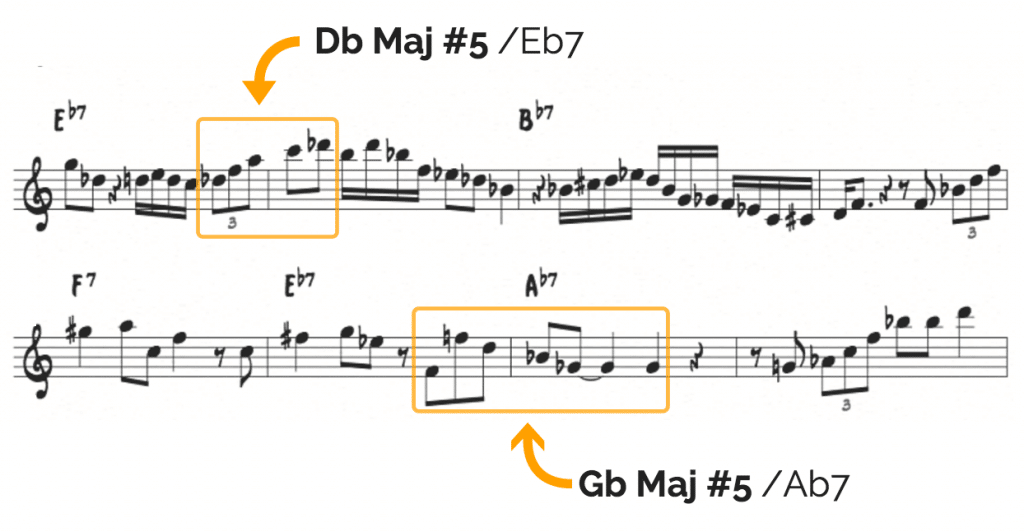 Along with developing earlier concepts in this chorus, also notice how he:

Freddie Freeloader is a 12 bar blues and just as you would expect, Wynton plays the “blues” in his solo. Take a listen to his third chorus:

One thing that sticks out about Wynton Kelly’s playing is his mastery of swinging and the blues language:

Keep in mind that the language of the blues can be used in anything that you play from jazz standards to pop tunes.

But how do you turn the blues scale into a line like Wynton Kelly plays?

It’s not about the notes, but how you play them. Think in musical statements with rhythmic content, melodic contour and intent. Be sure to listen to and transcribe your favorite players to absorb this language into your own playing.

The other thing you’ll notice in this chorus is that he begins to combine techniques. Notice how in the line below he combines each of the techniques of enclosure, #11 sound, triplets and chromaticism into one line:

Combining techniques is a great way to develop the lines you’ve transcribed in the practice room. Take the original line and change the rhythmic content, alter the harmonic character of the line, or start with an enclosure.

The 4th chorus: Implying the minor ii over V7


In the final chorus of his solo Wynton begins to imply minor sounds over the static dominant chords of the blues. Take a listen:

To do this he uses the bebop reharmonization technique of inserting a ii-V7 progression over a static dominant chord. If you look at the fourth bar of this chorus he implies a ii-V7 over a Bb7 chord that leads to the Eb7 chord in the next bar.

The blues is a fertile setting for experimentation and developing ideas. If you listen to any great improviser you’ll hear them mixing blues language with their personal harmonic concepts and language – inserting ii-V’s, altering chords or playing outside.

In the same vein as inserting ii-V’s, another technique that Wynton uses over the V7 chords in his solo is implying the related minor ii chord, for example Bb-7 over and Eb7 chord.

Check out how he employs this technique in the final 8 bars of his solo: 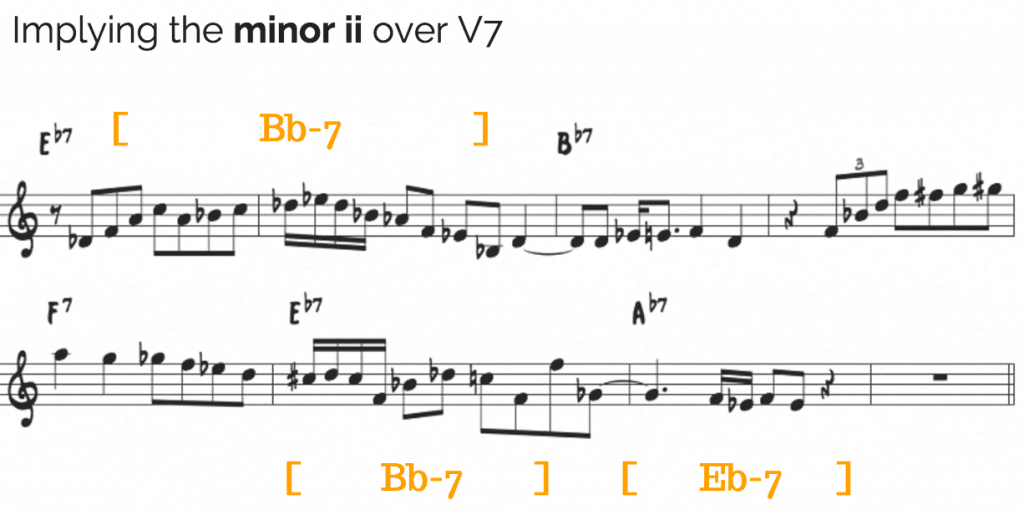 Instead of playing over the written Eb7 chord, he simply thinks in Bb-7. And in the last bar he implies Eb- over the Ab7 chord.

Try out this technique in your own solos. When you encounter a long V7 chord try playing the related minor chord or insert a ii-V7.  The blues is a great starting point for getting this technique together in all 12 keys.