Several readers have written us lately asking how to practice scales. Simply practicing them is not difficult, but attaining a high level of speed and accuracy, while keeping your sound consistent throughout all registers is quite a task.

This article assumes you are familiar with the 12 keys and the scale qualities of major, minor (natural, harmonic, and melodic), whole tone, and diminished.

Most college jazz programs, as well as most books, have a standard way they have their students practice. While effective, their prescribed method can be greatly improved upon for more rapidly acquiring the speed we all desire. Here’s what they say:

Here are simple examples in the key of C: 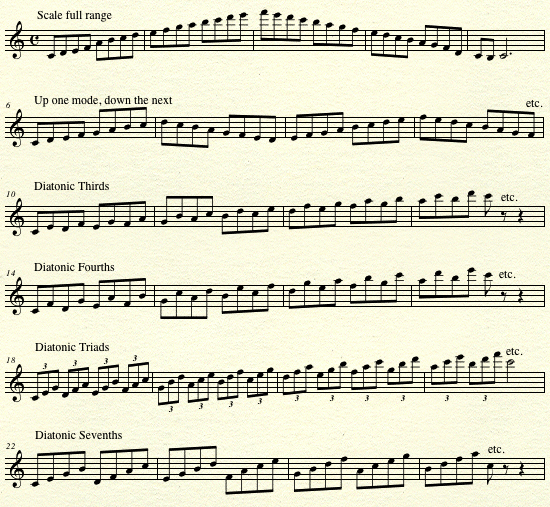 Seems simple enough, right? Sure, it sounds easy, but that’s a whole lot of work. I can tell you from experience, trying to tackle your scales this way is overwhelming, tiresome, and inefficient.

Yes, eventually you’ll want to be able to accomplish everything in this list with ease, however, there are easier ways to reach this level of competence than practicing in the previously prescribed manner.

Two keys to mastery is better than all keys half-assed

We are usually taught to practice our scales in all keys. Instead of focusing on learning one scale really well, we try to hit all the keys as quickly as possible, leaving us with not much better technique than when we started. So why did I say “Two keys to mastery…?” Because if you focus your studies on two particular keys, ‘F#’ and ‘Db’, the others will come naturally.

Most people start with the key of ‘C’. That’s just plain dumb. From ‘C’, it’s an all uphill battle. From ‘F#’, it’s all downhill to the other sharp keys. And from ‘Db’ it’s smooth sailing through the other flat keys.

Keys to Focus on 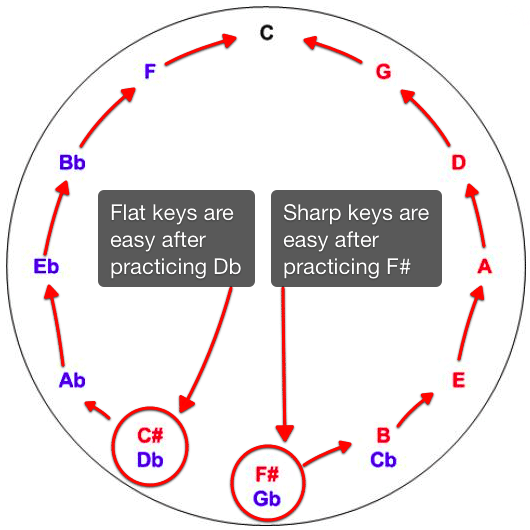 Try playing diatonic thirds (as in the 3rd line of the typical scale practice above) in the key of ‘F#’. Notice that they are difficult to play fast and smooth? That’s because the natural shape of them does not easily allow for speed or repetition.

Now, try playing an ‘F#’ triad up and down as in the first line of the example below. Then try it quickly. Notice that it’s easy to play fast? It’s ideal for scale practice because it’s a shape that allows for speed and repetition. Keep this in mind because in the not so distant future, you will want to create exercises similar to the ones I’m about to show you.

We’ll call this the Triadic Speed Drill (shown below). You play each triad in a scale, repeating it over and over until it’s extremely fast and smooth with a metronome. If any part the scale that is difficult, slow it down and work out the fingerings until it’s effortless. 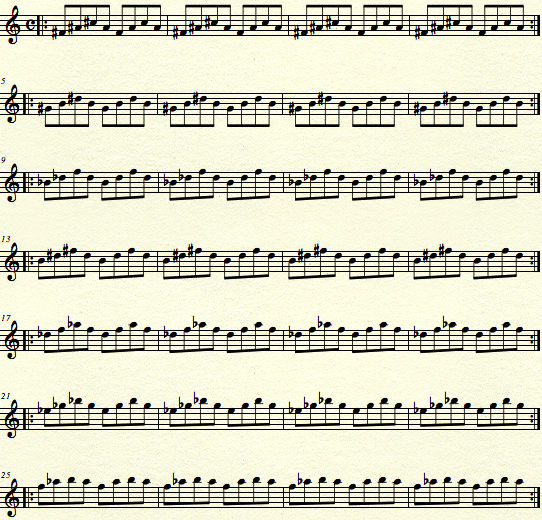 Then play what we’ll call the whole triadic sequence up and down your instrument (shown below). After drilling your diatonic triads for increased speed through the Triadic Speed Drill, this will be a piece of cake.

The same approach can be used for scalar segments. We’ll call this the Scalar Speed Drill (shown below) 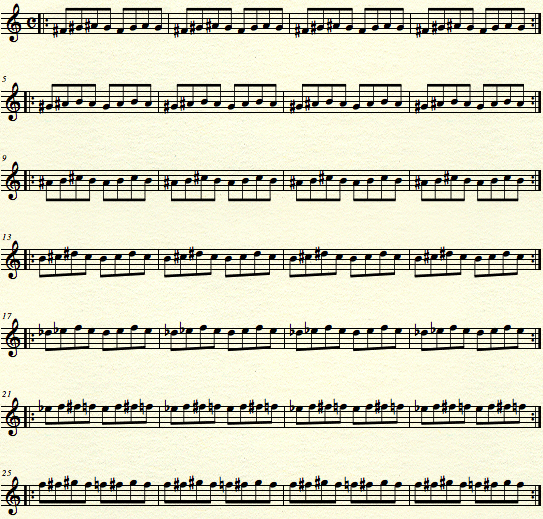 After practicing the scalar speed drill with 3 notes (each line uses three notes of the scale) try using 5 notes. So the first group of five notes would be F# through C#, the second would be G# through D# and so on.

Try playing the whole scale now too.  After working on these small scalar units, the entire scale will flow much better than it ever has.

Always start by slurring everything. This forces you to focus on keeping your sound supported and even throughout the registers. Dial in every note.

Once you’ve practiced slurring everything, try using light, off beat tonguing, commonly referred to as “jazz articulation.” Read through this article on articulation, for a better idea of how to go about doing this.

Isolate the high and low ranges

I can’t emphasize the use of a metronome enough. I begin with the metronome around quarter note = 72 bpm (slower for high and low ranges). I like to play these exercises in note groupings of 4, so I play 4 notes to every click of the metronome.

A number of the readers that wrote in asked what book they should play scales out of. Save your money. There’s no need for a book.

Once you start with F# major, I guarantee that B major turns out to be really easy. After ‘B,’ ‘E’ will be a breeze, and so on through all the sharps till you get to ‘C’. Similarly, after mastery of Db major, Ab major will be a cinch and then you’ll work easily through the rest of the flats to ‘F’.

Do not move on to any other scale qualities until you feel you have a solid grasp on the majors. I spend several months on one thing before I move on and I encourage you to do the same. Mastering the majors will let you easily move through all the other qualities mentioned in the beginning of the article.

Practice your scales like this for the following 3 months and I promise you your technique will rise to new heights!