Have you ever thrown your hands up in frustration trying to understand music theory? Have you ever found yourself lost and panicking in a solo as you search for the right scale or chord to play? Many frustrated musicians run into this wall every time they try to take a solo. From the outside improvising looks easy. You just pick up an instrument, call a tune, and play the music you’re hearing in your head…

However, the moment you try to create a solo yourself or improvise in a difficult key you quickly realize it’s a little more complicated.

So you look in text books, you take lessons, and you sign up for classes. Before you know it your head is overflowing with music theory information, but for some annoying reason it’s not coming out in your solos.

How exactly do you turn that music theory in your mind into music on your instrument?

There are two sides to music theory.

On one side is the music theory you learn about in books and school. The construction and building blocks of music, the theory behind scales, chords and tunes, and the flood of musical terminology.

The hurdle for any improviser is to turn all of that technical information that you learn about into music that people want to listen to.


There are some specific elements that you need to have down to navigate a musical situation.

All of that information can be useful, but remember, the goal of a soloist isn’t to memorize the terms and rules of music, it’s to perform them.

However, music theory knowledge consists of the skills that you’ve learned and ingrained through practice. It’s the stuff that you can apply to your solos in a split-second when you’re put on the spot.

So take a look at your own playing. Is music theory something that only exists in your mind or is it knowledge that you’ve transferred to your instrument? Is it a tool for musical expression or a barrier to your creativity?

Here are 3 steps every improviser needs to take to turn music theory into music:


The biggest mistake many players make with music theory is the same cardinal sin committed by beginners in any field – skipping over the fundamentals.

“Yeah I know my scales, I get what a major chord is…let’s get to the advanced stuff!”

But it’s not that easy.

You can easily understand the basics of a skill in your mind, however playing those same devices on your instrument is an entirely different story. This is where you’ll make your biggest gains in making music out of music theory.

You must transform the theory information in your head into real sound that you can perform on your instrument, and the first step there is with scales.

Scales are essentially a tool for developing a mental and technical understanding within all 12 keys. Think of it like systematically downloading every key into your technique, your fingers, your mind, and your ears.

While scales aren’t the secret to creating a great solo, they are the first step on the path to playing the music you’re hearing in your head.

Here’s how to practice scales:

Practice each with a metronome, starting slowly and gradually increasing the tempo. Your goal is to have freedom in all 12 keys. To access any key without having to think about it, rather hearing it and having the technique in your fingers.

Every musician knows a couple scales, but few have spent the time to ingrain them on their instrument. And It’s these musicians that can freely use this technique to create music in the moment. 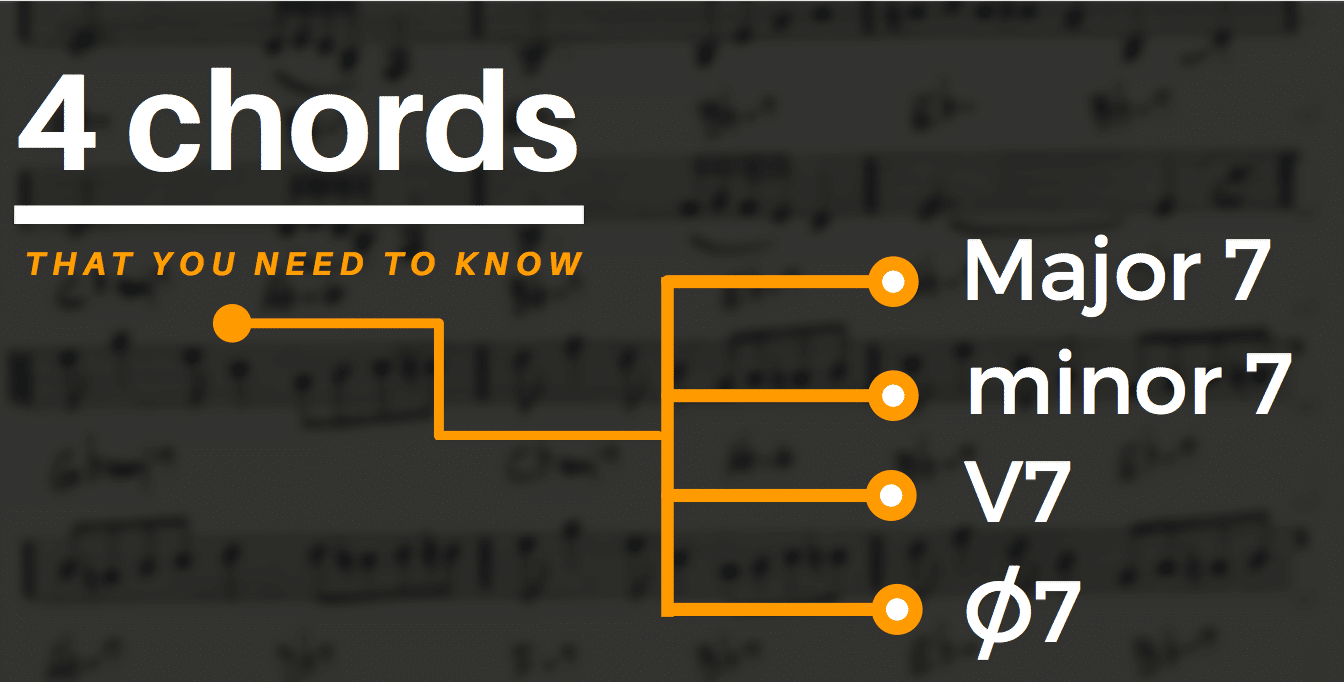 When you begin music theory is just that – a theory.

Definitions, diagrams, and musical examples written on a piece of paper. But you don’t want to just read about music, you want to perform it!

This means focusing on the sound of music. As an improviser the sound that you’re going to hear as you create solos are chords and despite what you may believe, there aren’t hundreds of chords types that you need to learn – there are four.

That’s right, thousands of tunes, but only four key chord types. So learn them well. Everything else (b9’s, #9’s, altered chords, #11’s, tritone substitutions, etc.) is icing on the cake, variations of the same basic chord types.

The best tool you have for hearing and seeing these chords is the piano. Start by spending some time at the keyboard playing each of these chords in every key (C Major 7, C minor 7, C7, and C Ø7…).

And what if you don’t have piano chops? Not to worry, check out this article for some easy voicings.

Another great exercise is to play the diatonic chords in every key on piano to visually see the construction and hear sonority of each chord:

After you’ve ingrained your scales and you’ve learned the four key chords in every key, it’s time to focus on the relationship between these four sounds.

Every standard tune that you’ll encounter is composed of chord progressions and many of these tunes utilize the same common chord relationships.

Understanding the theory behind these chord relationships is only the beginning. Get to the next level by focusing on the sound of these moving chords while visualizing them in your mind.

Schools, instructors, text books and classes will teach you the information of music theory, but it’s your job to transfer this knowledge to your instrument.

Your goal is to have the sound of theory in your ear and the technique of theory ingrained on your instrument. To do this you’ll need to focus on these three areas in the practice room:

In the heat of performance you don’t want to be stuck thinking about how to play a scale or the notes of a chord, you want to focus on the sound of music in your own creative way.

These three steps will provide a great foundation for turning the facts and figures of music theory into music, but to start creating the music you’re hearing in your head you’ll need three more essential tools…

And that’s coming in the next installments of The 5 Skills You Won’t Learn in School!