Hey, did you just hear that? Look, did you just see that? Wait, can you feel that? What’s that smell? Wait…what?! On a daily basis our senses are bombarded with information. Sights, sounds, smells, and tactile sensations come at us from every angle, vying for a precious scrap of our cognitive awareness.

Despite our best efforts, we simply can’t take in all of this information. It’s true that we can experience a multitude of stimuli at once, but focusing our mind and differentiating between these stimuli requires a very special skill – attention.

The famed psychologist William James describes attention as such:

Everyone knows what attention is. It is the taking possession by the mind, in clear and vivid form, of one out of what seem several simultaneously possible objects or trains of thought. Focalization, concentration, of consciousness are of its essence. It implies withdrawal from some things in order to deal effectively with others, and is a condition which has a real opposite in the confused, dazed, scatterbrained state which in French is called distraction, and Zerstreutheit in German.

Think back to the last time you were in a crowded room at a loud party. Groups of colorfully dressed people and flashing lights, dozens of conversations happening simultaneously, the smell of hors d’oeuvres mixed with perfume, and a wave of heat emanating from a crowd of excited people.

Taking in everything at once results in sensual overload.

Aurally, the cumulative result of every voice creates a wave of indistinguishable noise. We hear multiple voices, but can’t distinguish or understand any single one. It’s only when you focus your attention on a solitary voice, blocking out all other extraneous sound, that you can begin to process the information in a meaningful way. 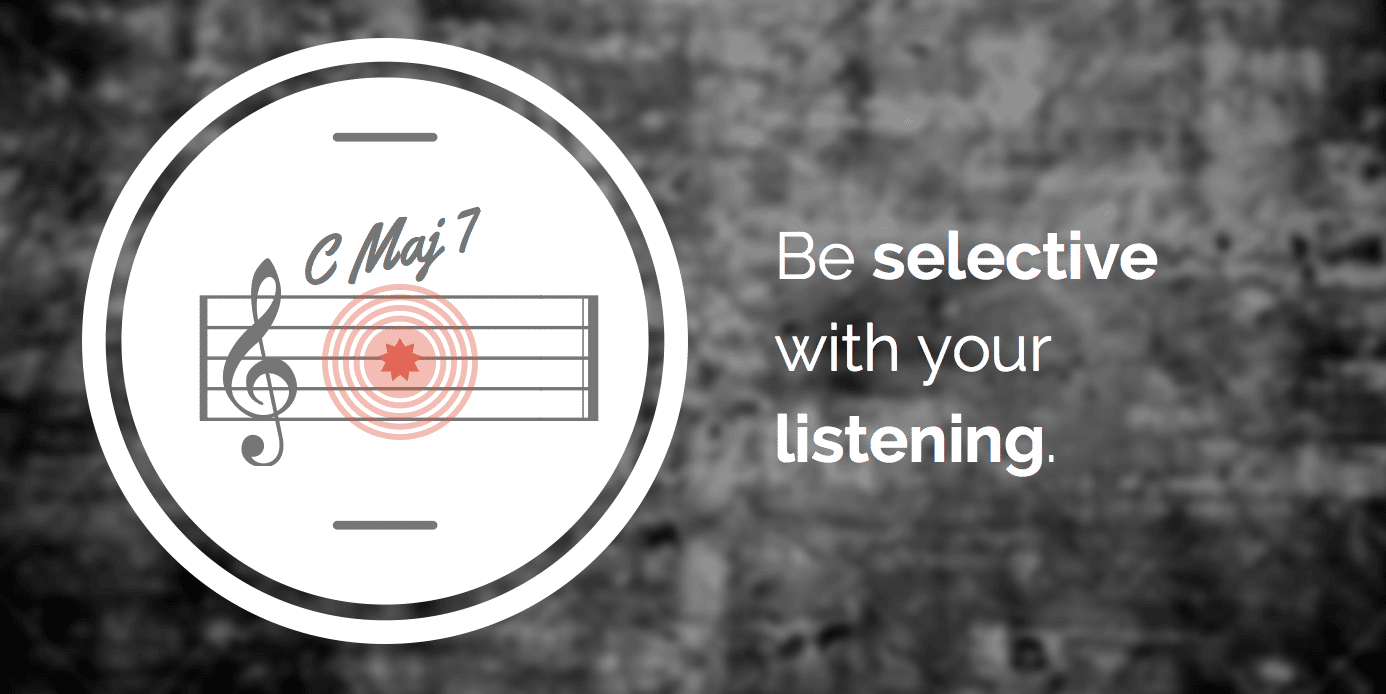 So how does this relate to music and learning to improvise?

Listening to a record or attending a live concert is akin to focusing on the multiple streams of information at that crowded party; different instruments, rhythms, and melodies swamp our ears and compete for our attention.

With music however, we have trained ourselves to take in multiple voices at once.

When we listen to a classic jazz record, we’ve come to expect certain things. The bass player is going to be walking quarter notes, the drummer is going to be using the hi-hat on two and four, and the piano player will be comping the changes behind the melody and soloists.

Because countless jazz standards follow this formula, we can listen to multiple voices at the same time and see the “big picture.” Unconsciously we’re aware of the individual parts, but as we listen we focus on the sum of these parts compiled into one group sound.

This is effective to an extent, but to intently study one voice (as you would when you’re transcribing a solo or learning a melody) requires the same selective attention that you used at the noisy party; picking a single voice out of a volatile sea of noise.

Change the way you listen

Have you ever noticed that you unconsciously follow the same patterns when you listen to recordings?

To remedy this tired and predictable pattern you need to change the way you listen.

By focusing your attention on an individual voice and selecting different parts than you normally would study, you’ll hear things that you’ve never heard before. Transition from a state of casual listening to one where you are isolating small pieces of information and studying them intently.

For example, take the track Summertime from the famous Coltrane record My Favorite Things. Listen to the video below as you normally would:

Most likely, you naturally focused your attention on Coltrane’s playing as he stated the melody and transitioned to his solo.

Let’s listen to the track again.

This time though focus on the drumming of Elvin Jones, especially as he plays behind Trane’s solo. Mentally bring the drums to the foreground and let the other parts fall to the background. Study the patterns and rhythmic interplay as you would the lines and harmony of a soloist and see what you discover.

By selectively listening to music in the method described above, you will hear things on your favorite records that you’ve never heard before. Learn to focus your attention in this way and you’ll find yourself picking up information much faster.

Selective listening can be effective for tasks other than studying records and transcribing solos. The next time you work on some ear training exercises, use this technique to isolate the different aspects of intervals, chords, and melodies.

Now your attention is focused on the specific color unique to the third of the chord. As you go to play other chords, the third will aurally stick because you have trained your mind to latch on to that sound. Every chord tone, interval, and chord type has a unique color that can be identified through practice as demonstrated in the above example.

Using the technique of selective listening will allow you to identify and master any number of intervals, chord tones, or chord types very quickly.

Your attention is up to you

Everyday we encounter thousands of things that assault our senses and demand our attention.

The beautiful thing is that we can choose which stream of information to focus our attention on. This concept doesn’t just apply to sound, it’s the same for all of our other senses. Using selective attention, we can alter our normal patterns of perception and even notice things that we’re normally oblivious to.

Musically, learn to isolate the pieces of sound that you want to transcribe, study, and apply to your own playing. This could be a polyrhythm that a bass player is using, a chord that the pianist is playing behind a soloist, or a subtle groove the drummer periodically hints at.

Because these parts are happening simultaneously within a group context, you have to mentally separate them from the mix as you listen.

When you’ve gained control of your attention and mental focus, this will become much simpler. The next time you check out a recording or are checking out a live band, try it out. By focusing on specific information and using selective listening, you’ll tune out extraneous noise and concentrate more intently on the things that matter to you.

Master All the Things You Are – Part I: The A Section (Premium)