Being able to quickly hear, sing, and accurately identify intervals is essential to developing your improvisational ear. In this article, we’ve put together a plan for you to master your intervals in 28 days…

For beginners, this will give you a much needed foundation. And for more advanced players, it will give you a chance to brush up on your intervals and fill in any gaps that might be there. The goal is to be so familiar with these sounds, that it requires very little effort to process them. You can never know this stuff too well!

Getting acquainted with the intervals

One of the best ways to get familiar with all of the intervals is to find a tune you already know that makes use of each one. There are 12 intervals total and you’ll need to practice them both ascending and descending, making for 24 total. You can find your own tunes that make use of each interval in both directions if you like, or you can download this handy little interval chart for free from Jamey Aebersold.

He lists a variety of standards where the first two notes of the melody are the denoted interval. And for your convenience, here are  some clips for all 12 intervals in both directions. In general, the denoted interval is the first two notes of the melody and the clip, but occasionally it will occur after a short intro. I tried to select clips that play the interval loud and clear, so you shouldn’t have to work to find any of them. (You can skip over the clips for now and revisit them once you read the 28 day plan below)

Gene Ammons on I remember You, Miles on Bye Bye Blackbird, & Sinatra on Nice Work If You Can Get It

Miles plays Stella By Starlight, Sinatra  sings The Lady Is a Tramp, and especially for Patrick Bateman we have Whitney Houston singing Joy to the World (sorry I just couldn’t help myself)

I’m assuming you know Happy Birthday. And this clip is Benny Goodman on Body And Soul

Sinatra sings What Is This Thing Called Love? And another you already know is Frosty The Snowman

Louis on Oh When the Saints, Dizzy & Bird on I Can’t Get Started

Miles on I Summertime, Trane on Bessie’s Blues, & Trane on Giant Steps

Here Comes The Bride, Desmond & Mulligan on All The Things You Are

Parker on I Yardbird Suite

Scott Hamilton on Have You Met Miss Jones?, Getz on Seven Steps To Heaven

Paul Desmond playing Morning of the Carnival (From Black Orpheus)

Tony Bennett and Bill Evans play Days of Wine And Roses, Joe Henderson on Take The A Train

Herbie plays Watermelon Man. Not the best example of a minor seventh, but you can hear it in the first big descending leap of the melody.

Keely Smith sings I love You

The goal of this exercise:

This plan is structured in such a way that you’ll only spend 15 minutes a day actively working on your intervals. Anyone can find 15 minutes a day and the rewards are huge. The plan utilizes a concept called spaced learning. The idea behind spaced learning is that you want to turn short term memory into long term memory. To do this, spaced learning prescribes three active periods of learning, separated by two 10 minute breaks. During these breaks, it is important NOT to think about what you were working on. Go cook something, do some push ups, go read a book. Anything not to think about what you were working on. Ok, here’s the plan: 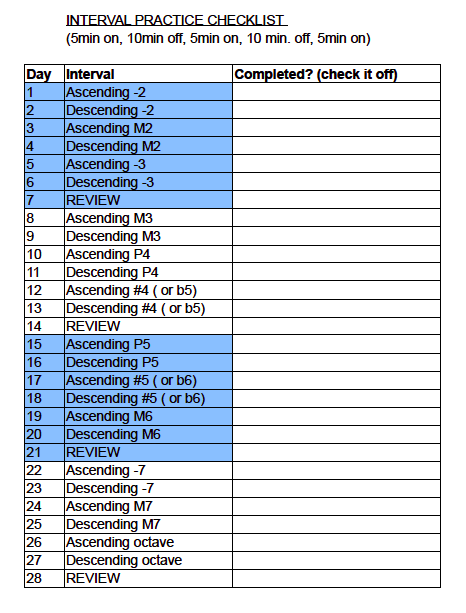 Well there you have it. Everything you need to master your intervals in 28 days!