It lies in something much more simple – their uncanny ability to take the most fundamental elements of music and create meaningful ideas with them.

In their hands, these simple concepts that every beginner knows are suddenly transformed into musical stories that touch the listener. And this is where the magic lies.

However, these are also the same exact devices that many players see as obvious or easy. The stuff that you memorize and quickly skip over for advanced scales, patterns, & substitutions…and I’m guilty of this too.

I remember thinking that I didn’t want to focus on “easy” tunes. I didn’t want to waste time on triads and arpeggios, or to slog through scales…I wanted to jump in and start improvising with complex melodies and harmonies right from the get-go.

This is precisely where a lot of my frustration with improvising came from…quickly passing over important fundamental concepts before mastering them or truly understanding their value.

And one of the most essential of these concepts that I passed over was the triad…those 3 simple notes that every musician knows, yet few truly understand.

Below, we’ll show you why the triad is a powerful tool for quickly and effectively building melodic ideas over any chord and how a master like Miles Davis expertly uses them within a solo… 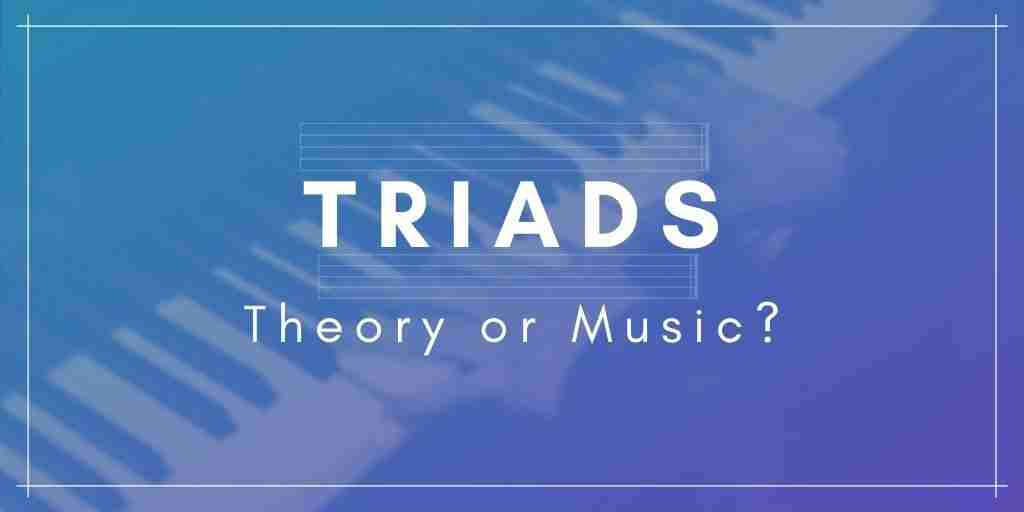 What is a triad?

Or a better question yet…what does a triad mean to you?

Is it a music theory definition that exists in a text book? A practice exercise that you take through all keys? Or, is it a musical tool that you can use to approach your solos in creative ways??

While this might seem like a trivial question, how you define this triad in your mind determines how you’ll approach it in your solos. And on a deeper level, it’ll determine whether the lines you play sound like music theory or actual music.

I’ll show you what I mean…

The Triad as Music Theory

For many players, the triad simply exists as a music theory definition. Three notes stacked on a music staff in a fixed position…

These are exercises that you might play at the piano or on your instrument in every key. You memorize it and you move on – it’s the tedious stuff that you have to get through before you can get to the real music making.

However, the problem is that a connection is never made between the theory of the triad itself and the harmonic & melodic possibilities that you actually improvise with.

If you get stuck in this limited theory definition of triads, it can severely limit your musical options when it comes to improvisation… 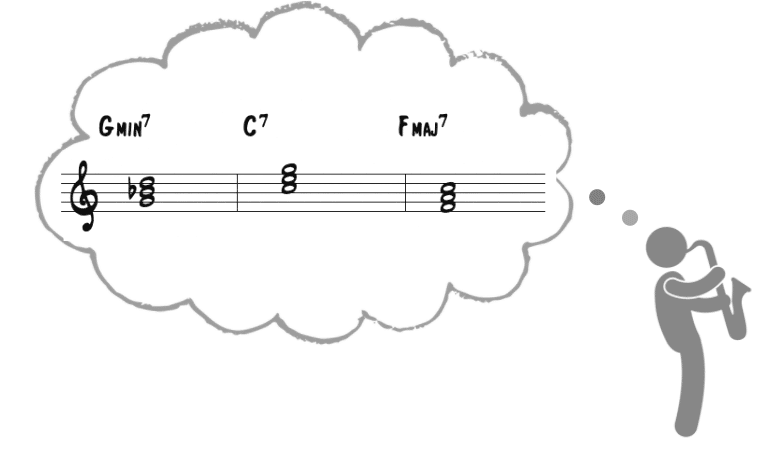 The Triad as Music

Now let’s take a different look at the triad, not as a stand alone theory structure or practice exercise, but intimately connected to the sound of the chord…

If you think about it, the triad is a quick way to find and access the core of any sound – the root, 3rd, and 5th…

These notes relate directly to the sound of the chord, they’re the exact same chord tones you’d use to construct a melodic line. And most melodies that you’ll encounter are based around these strong chord tones at some level.

It’s important to keep in mind that the triad isn’t just 3 fixed notes on the staff, you can access these important chord tones in different inversions:

And these notes also span the entire range of your instrument from low to high and high to low:

With an approach that includes the entire range of your instrument and the different inversions, you’ll uncover a multitude of intervallic and melodic shapes beyond the obvious stacked thirds:

Perfect 4ths and 5ths, Major and minor 6ths etc. These intervallic options will become tools to create your melodic statements, defining the shape and direction of your musical ideas.

Add when you add in rhythm, time, and sound, the possibilities for melodic invention are unlimited…

Below we’ll show you how to transform the typical theory approach to a triad into a springboard for musical ideas in your solos, taking a simple triad and turning it into a line like this:

But first, some background work… 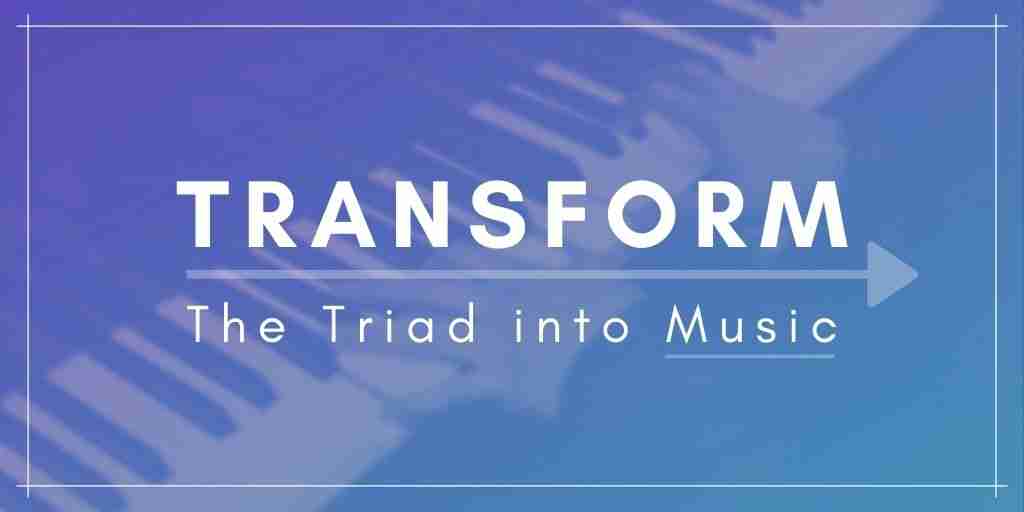 Before we start looking at musical applications of the triad in your solos or how a master like Miles Davis utilizes them, it’s important that you do some preliminary work in the practice room…

The goal here is to transform the music theory of the triad into actual music – into sound in your ear, into technique on your instrument, and eventually into musical ideas.

Here are three exercises to focus on in the practice room:

The first step is to visualize the triad in every key. Start with the basic triad, move on to the inversions, and finally see the entire range.

The goal is to be able to think of a key and visualize the entire range of the related triad in a split second. Along with Major triads, do the same with minor, augmented and diminished triads.

Ingrain on your instrument

The next step is to ingrain these triadic variations on your instrument. You might start with an exercise like this:

Through repetition you’ll ingrain the variations of each triad into your technique, that way when it’s time to solo you’ll be able to effortlessly utilize these devices.

Remember, regardless of the instrument you play, chordal or single note, you need to be able to conceptualize and access the triad in both a vertical and linear format…

Again do the same major, minor, augmented and diminished triads in every key.

Finally, break down each triad into the various intervals found in the entire instrumental range.

Your goal is to be able to access all of the interval combinations as you create melodic lines in your solos:

Practice these intervals in all four directions and in all keys. Keep in mind that this approach to the triad is just the skeleton of the sound, you’ve ingrained a versatile framework that you can improvise on top of.

To see how you can cultivate a melodic approach to the triad, we’re going to take a look at a solo example from the great Miles Davis.

Check out his solo on Star Eyes recorded in 1951 with Charlie Parker when he was 25 years old:

Here is the first part of Miles’ solo: 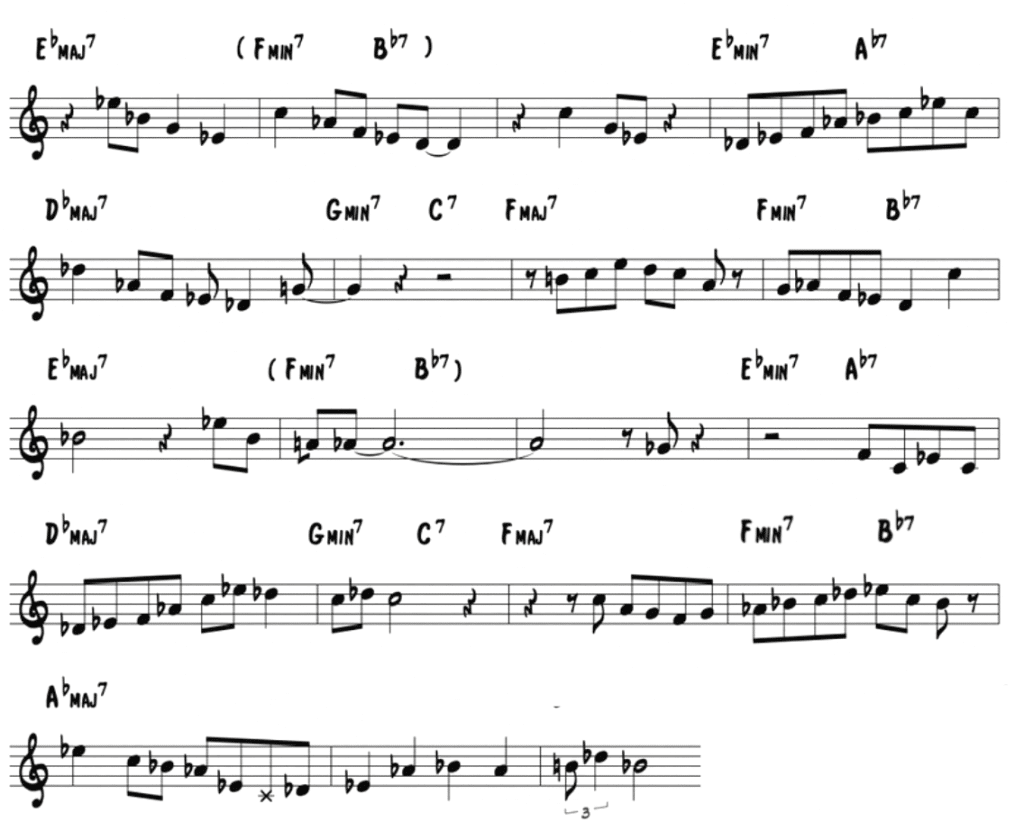 Using examples from this solo, we’ll show you how to transfer the triadic framework you ingrained above to the chords, progressions, and tunes that you play.

I) Approaching a single chord with a Triad

The triad is a good starting point for creating melodic ideas on Major or minor chords. A skeleton or framework of the sound that you can quickly access and start improvising melodies…

Miles opens his solo with the phrase below:

One of the benefits of approaching a chord and making melodic statements with this triadic framework is that it greatly simplifies things. Rather than having to contend with multiple scales, unlimited notes, or patterns you’ve practiced, you can get right to the core of the sound.

As you can see in this line, time, rhythm, and phrasing play vital roles in creating melodic statements with simple material, and are just as important as the harmony.

You don’t need a ton of notes, dozens of scales, or advanced harmonic tactics to create a good solo. With the most basic melodic tools and an understanding of the harmony, you can create meaningful music.

It’s also important to realize that you don’t have to play each note of the triad when you create melodic ideas. Instead you can focus on one or two notes to generate melodic ideas…

In this line Miles creates a melodic idea simply using the 5th and the root of the Eb major triad.

Once you can create melodic ideas with the basic triad, the next step is incorporate other chord tones and melodic techniques onto this structure.

Think of the triad as the foundation that you’re going to build melodic lines on top of. Check out how Miles does this to the major triad in the example below…

You can see the Db triad is the skeleton of this line. On top of  this he utilizes enclosure to approach the root (Db) of the triad and also utilizes a passing Eb (9th) to create linear motion:

With a few approach notes and neighboring tone a simple major triad is transformed into a musical idea!

By incorporating enclosure, neighboring chord tones, and even chromaticism you can create endless melodic possibilities with the framework a simple triad.

Let’s take a look at another example of this technique. In this line over an Ab chord, notice how he augments the original triad with a few neighboring chord tones…

Along with the Ab triad, Miles uses the 4th and 9th to emphasize the strong chord tones.

III) Approaching a progression with a triad

Lastly, check out how Miles uses the techniques we’ve highlighted above to play over this ii-V-I progression in Db…

Rather than approaching each chord in the progression separately (Eb- Ab7 to Db), he plays a musical line in Db major that is based the tonic triad:

Notice how he incorporates the 9th and 6th along with the triad and utilizes enclosure to arrive at the Db in the 2nd bar.

Instead of the cookie-cutter approach to the ii-V-I progression, you hear a strong melodic line.

Using the Triad in your own solos

Sure, the triad itself may seem basic and the solo examples above may seem simple…

But that’s the point.

Like the masters of this music, you have to be able to create melodic ideas with the fundamentals before you even think about getting more complex.

And the triad is the perfect place to start:

Very quickly, those three simple notes that we call a triad can get pretty complex. It’s worth another look in the practice room…do you really know your triads??