If you’re serious about reaching your musical potential or stepping up your jazz improvisation game then the majority of your time as a musician should be spent in one place: The practice room. It’s where you’ll do the dirty work of pursuing your musical goals and where you’ll build your foundation as a performer.

It’s no secret that consistent practice is one of the most important factors in determining your musical success this year.

But here’s the catch: Not all practice is “good practice”

In fact, the way you define “practice” might actually be holding you back and in some cases, even doing you harm. And this can drastically impact your performance and creative confidence when you get in front of an audience.

Remember, good or bad, the time that you spend in the practice room will ingrain habits and it’s these habits that will determine how you perform, and the fun you have with music.

Sounds pretty serious, but don’t worry, you’re not alone on this journey…

It’s the same for all musicians

From the complete beginner and the music student toiling away in the practice room, to the professional walking onto stages all over the world…

Musicians encounter the same creative obstacles each day. The pressure to play a certain way, sudden nerves before a big performance, or unexpected setbacks that cause self-doubt. Being a musician isn’t easy and creating your own music takes more than just technique.

But what if it’s the practice itself that isn’t working? What if the problem isn’t the notes and scales, but the way we are approaching them day after day?

Music is much more than the notes…and this is easy to forget.

The thing that separates great players from struggling players isn’t the practice materials they’re using – it’s their mindset about music. The best players have learned how to approach music in a way that creates confidence, reinforces good habits, and inspires creativity.

You already have enough books and recordings sitting on your shelves for years of practice…To start reaching your creative potential you need to change your mindset about the way you practice.

I) The trap of fear and anxiety

As a musician you’ll find yourself in a lot of challenging situations….

Auditions, big performances, getting put on the spot for a solo, or simply trying to improvise over an unfamiliar chord progression…

These situations create an anxiety that can follow you into the practice room. You can start your routine like any other day, but in your mind you see yourself having to play in front of judges, you can already feel the pressure of an audience, and you wince at all the wrong notes.

Suddenly your body tightens up and your breathing becomes forced. You touch your instrument and you feel anxious and the thought of playing brings to mind a host of negative feelings.

Productive practice should be relaxed and focused, a place to take musical chances and focus on your weaknesses…not an hour of tension and fear. This type of anxious practicing will just lead to more anxiety on stage, and that’s the opposite of what you’re trying to do!

II) The frustration of “I can’t”

You dive right in, but it turns out that you can’t play it right away – it’s in a difficult key, a high register, or simply too fast. So you try again…

Now you want to throw your instrument out of the window!

Sometimes we bite off more than we can chew in the practice room… And it’s frustrating when we can’t produce those notes or musical lines on the first try.

We want to conquer everything at once and often revert to the mindset of beating our heads against the wall until we get it. The only problem is that you’ll wear yourself out in frustration before you even make a dent.

You’re going to encounter things that are difficult in the practice room, things that you can’t play on the first, second, or even fifth try. That’s just the way it is.

However, the answer isn’t going to be found by forcing your way through obstacles or sludging through musical roadblocks. There is a smarter way…

III) Caught up in competition and rushing to improve

There is always someone better…

As you practice you’ll see players pick up their instruments and play great solos on the first try and musicians that win the audition or get recognition for their playing.

All while you’re struggling to get the basics together.

At jam sessions everyone will seem to know more tunes, the person in the next practice room is transcribing solos full of double-time lines, and you keep hearing recordings of players playing higher and faster than you can imagine…

It’s easy to compare yourself to other players and it’s even easier to let this comparison have an impact on the way you practice or even the way view yourself as a musician.

You feel like you need to catch up with everyone else, that you can’t waste time on the basics or the easy stuff…you may even begin to doubt your own abilities as a musician. However, there will always be other other players to compare yourself to as long as you own an instrument.

The question you have to ask yourself is this: Is competition the real reason you started playing music in the first place?

IV) Bored and just playing around

But the same old routine every day can become tedious and boring.

Those predictable warm-up exercises, the same scale patterns, another tune to memorize, another solo to transcribe…

This is exactly why many players fall into the habit of ‘playing’ instead of practicing. Turning on a play-a-long track or a favorite recording and just playing for hours. It’s fun and it feels like practice!

However, the problem starts when playing around for fun replaces your actual focused practice time. When exercises for tone, technique, and musicality are replaced by these play-a-long sessions altogether.

Effective practice is a balance between discipline and creativity. All players get bored and can fall into a rut with their practice routine, but that’s no excuse to throw your focus and musical direction out the window.

So what is the solution??

No matter what you do in this frame of mind it’ll be extremely difficult to be productive, in fact it may even create bad habits that you’ll spend years trying to correct.

Remember, twenty minutes of focused practice is better than hours spent ingraining anxiety, banging your head against the wall in frustration or just messing around with no real goal in sight.

Take a look at how you are approaching music in the first place..

“When you meditate on something, you’re forced to look at it from many different angles, including some you’ve probably never thought of. You’re forced to reach down into the depths of your identity and individuality. Consequently, your results will be uniquely yours. That’s what we seek as musicians: to light that tiny flare of originality and individuality.”~Steve Vai

Many musicians find themselves struggling with limiting mindsets that are formed before they even get into the practice room. But many don’t know how to break down these mental barriers.

Theory books, etudes, and recordings are great for learning the technique of becoming a musician, but to start reaching your creative potential you need something different. 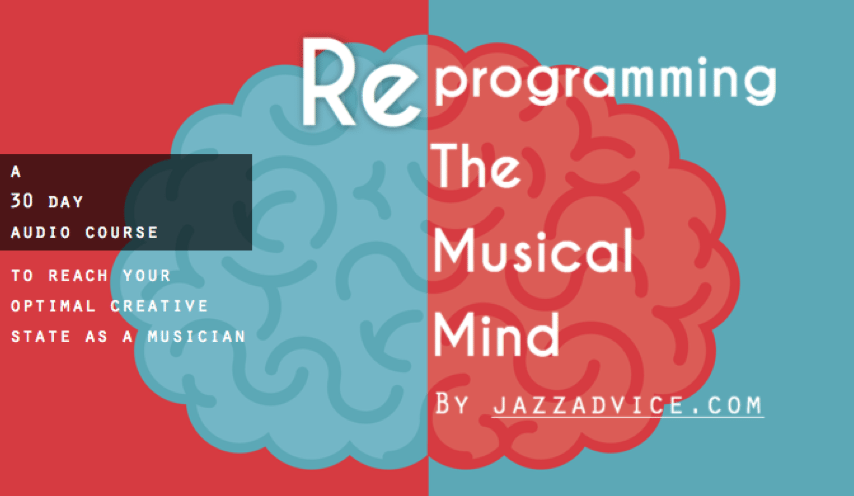 This is why we’re excited to release our brand new 30 day audio course aimed helping all musicians reach their musical potential!

Whether you’re looking to improve the practice, performance, or creative side of music you need a mindset that inspires freedom and musical progress. And this is something that gets left out in the text book approach to learning music.

In Reprogramming the Musical Mind, you’ll find a structured 30 day plan with over 9 hours of audio that will teach you how use techniques like meditation, visualization and affirmations to create your optimal practice and performance mindset.

And once mastered, you’ll be able to replace those negative patterns and mindsets in your approach to music with positive and productive actions in your daily routine.

We’ll also give you a 25 page PDF booklet outlining the process and 3 review tracks that you can come back to anytime you’re feeling frustrated or discouraged with your playing. Get your copy of Reprogramming the Musical Mind today!