Iused to frequent the Village Vanguard to go see my teacher Rich Perry perform all the time. As you gaze upon the walls of the Vanguard, you peer into the past…jazz legends, the inventors, live on the walls…

You sit there in awe, knowing that at some point, they occupied the space you now occupy. And that thought leads to another: most of the jazz legends are not around anymore. The only window we will ever have to them is through their recordings. 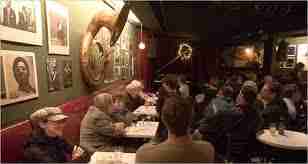 Recordings and their limits

Jazz is meant to be heard live. Rarely caught on recordings, the energy permeates the venue and hits you right between the eyes. In my experience, hearing Michael Brecker, Stanley Turrentine, Kenny Garrett, and a handful of other incredible players live, greatly surpassed hearing them on recordings.

Recordings represent an extremely limited time and space in a musician’s life. Who knows what was going on in their life that month, that day, hour, or even that moment. Some recordings are flops. Not even Charlie Parker could be a perfect player all the time. And sometimes the way he was miked made him sound B-rate, and we all know, he’s not B-rate.

Get in the habit of finding a player’s recordings that showcase his absolute best playing. If a friend says he loves a specific player and you’re not so inclined to agree, ask him what his favorite album is. Chances are you’ve never heard it. We base our opinions of a player on what we’ve heard them play. My impression of Johnny Griffin, I initially based upon hearing one album and wasn’t floored. Then I heard Introducing Johnny Griffin and was completely blown away! Upon hearing that single album, my opinion transformed. He’s incredible!

All these so-called greats are called that for a reason. Because they are. It’s up to you to find them performing at their pinnacle.

If you don’t like something, it may be that you just don’t understand it. Bite your tongue and keep listening. Keith Oxman, a wonderful Denver based tenor player, used to tell me that it’s the stuff you really have to work at when you listen that often becomes the most valuable to you. Many of my favorite players today I did not like upon first hearing. Hold up your judgment and find the best recordings by asking people that rave about a particular player what their favorite album is. Most importantly, keep listening!

Every week you should be finding more music. Like Harold Mabern says, “Be greedy for the music!” Expose your ear to the players pushing the limits today, and constantly strive to strengthen your jazz roots. Anything you hear today came from somewhere. The more you listen to the legends, the more you’ll understand what today’s musicians are doing.

Listen and learn from the best

When who you listen to affects how you play so much, don’t waste your time with anything but the absolute best. One day I began to transcribe a Stan Getz solo. After about ten minutes, I thought to myself, man, I’ve heard him play better. Well then what the heck are you doing??!! Why am I emulating Getz when he’s just sounding good, but not outstanding?! And he does sound outstanding on many occasion. I immediately stopped, put down my horn and reevaluated what I was doing. Then I found a track of Getz killin’ it. Needless to say, I learned that solo instead. Listen and learn from the best! It’s all there for the taking. Now go get it.