At some point in your musical journey, regardless of what instrument you play, you’ll find yourself in front of that 88-keyed beast we call a piano. This can be a daunting task for many musicians. Often times, one of the biggest fears or stumbling blocks for non-pianists is that of comping chord changes. This simply doesn’t have to be the case…

With a few simple devices and some time at the keyboard every day, the piano can become an incredibly valuable tool in your musical development.

If you play a single voice instrument, while you can arpeggiate a chord to approximate chordal structures, you can’t play chords. This is where some proficiency at the piano will come in handy.

At minimum, you should have the ability to look at a lead sheet or recall a memorized tune and be able to play the chords in root position. By learning this skill, you’ll have an easy way to hear the harmonic progression of any tune, and you’ll be able to see all of the notes laid out neatly in front of you.

Let me show you what I mean…

We’ve all had different experiences with the piano.

Maybe you’ve never played a note or perhaps you’ve had some basic lessons years ago. It’s never too late to get together some simple piano chops, regardless of your skill level. Here are a few practice ideas and voicing options to help you on your way:

If you haven’t had any experience on the piano, this is a great place to start. All you need here are the essentials of any chord: the root, third, fifth, and seventh.

Every type of chord, from Major7 b5 to V7 #5,  can be played in root position. Get to know the layout of the keyboard by playing these voicings in every key. Try this exercise for starters, which goes through the most common seventh chords of one key in succession:

As you gain some familiarity with the piano, you will want to find some voicings that are more interesting and move more logically. Playing chord progressions in root position, while good for slowly studying individual chords, will sound very disjunct when played in succession:

The goal rather, is to move from chord to chord with the least amount of movement, while incorporating optimal voice-leading (7-3 resolutions). To achieve this, you’ll need to play some chords in different inversions other than root position.

Begin by playing two note voicings consisting of just the 3rd and the 7th of the chord, isolating the important resolutions of the progression:

Then add a bass note below the two note voicing to hear the full sonority of the progression: 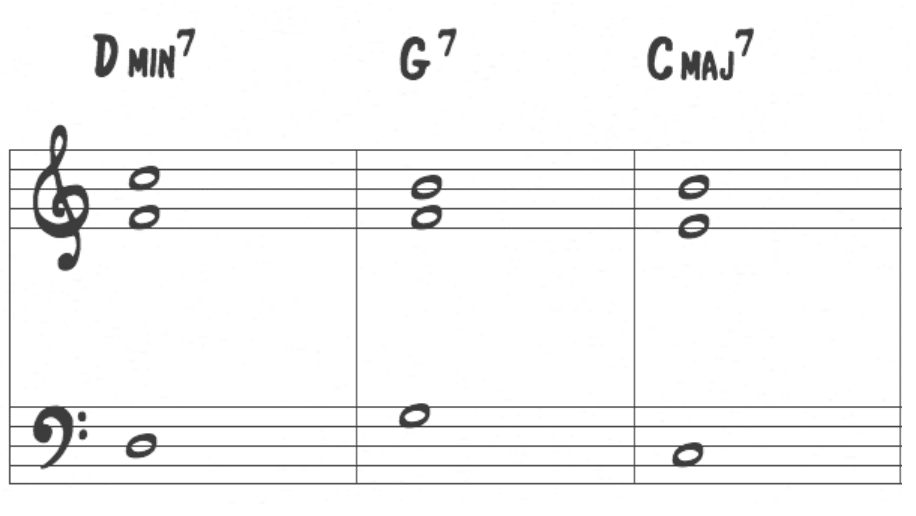 Do this exercise with ii-V’s in every key and you’ll quickly be able to pick out the 7-3 resolutions and visualize any ii-V you come across, whether you’re at the piano or on your own instrument.

Note how this method utilizes the 7 – 3 resolutions and retains common tones between the ii-V7 chords and the V7 – I chords.

Try this same idea with minor ii-V’s as well:

It is common practice for most pianists to omit the root from their voicings because they are usually playing with a bass player.

Below is a four note rootless ii-V voicing in the style of Bill Evans. Notice how the upper structures (9ths, 11ths, and 13ths) are emphasized and how smooth voice-leading is incorporated throughout the progression:

Here is another variation on this type of rootless voicing. Take note once again, of the resolutions through voice leading and the limited amount of movement:

Apply this same technique to minor ii-V’s as well:

Now learn these voicings for ii-V’s , Major and minor, in every key. If you spend a few minutes everyday, you’ll build a solid base of functional voicings very quickly.

Putting these chords to use

The ability to comp chords on the piano is an essential skill to have for any improviser. You don’t have to be a gifted pianist though, to benefit from this instrument.

Once you are able to voice some basic chords, you can put this skill to use to benefit your ear. The piano should be your starting point for working on ear training, from intervals to complex chords and lines. By knowing some simple voicings, you can cover a ton of ear training exercises.


If you are having trouble with a certain sound or progression, the piano is a great way to work it out aurally as well as theoretically. Play a chord on the piano while holding down the sustain pedal and play along with that sound. I use this technique a lot to work out tricky chords or to practice some lines that I’ve learned on my trumpet.


One of the best ways to quickly figure out what is happening harmonically as well as visually in the solos you’ve transcribed, is to play them on the piano along with the chord progressions. In doing this exercise, you can hear how each note of the line relates to the chord and actually see it, as opposed to playing it on a wind instrument where the line exists only in your mind.

Take a line that you are working on and play it on the piano with chordal accompaniment. For example:

Or if you’ve worked it out, use the rootless voicings:

Either way, studying and hearing how the line corresponds to the underlying harmony is essential to ingraining these lines into your musical conception. By isolating lines in this fashion, you can not only hear what is happening with the line harmonically and intervalically, but physically see it as well.

This book is more advanced, but definitely worth it for getting your piano chops together.


These simple voicings are just a start to becoming proficient on the piano. By spending some time at the keyboard you’ll greatly benefit your ears, harmonic understanding, and overall musicianship on any instrument that you play.

As always, the greatest resource you have is on the records. I’ll leave you with some Bill Evans for some insight into the true potential of chordal harmony: