We’ve all seen concerts that have affected us greatly and left a lasting impression on our musical perception and even our lives. Performances that seem to transcend the stage into another form of communication and stick with us long after the show has ended. It’s as if certain groups or performers have an uncanny ability to take complete control of an audience’s attention, communicating with the listener on multiple levels. But how does one get to this level? What does it take to make this much of an impact on listeners? What was it about those groups that made them special?

The answer lies with the rules of communication between a performer and a listener. When it comes to communicating ideas, there is no better source to look at then the techniques of great speakers. Accomplished speakers have the ability to move audiences, from the individual listener to large groups of people.

Throughout history important speeches and noteworthy speakers have facilitated change through the power of language and incited movements through the tactful delivery of a message. The actual power lies in taking an idea or message and crafting it in such a way that it will have an impact upon whomever may be listening.

Speaking to an audience is essentially a type of performance, akin to improvising, in which a message is delivered through the use of a language to the listener. In both public speaking and improvising, the goal is the same – to effect the listener with ideas and emotions.

You have to start somewhere

The struggles of a beginning improviser are much like the struggles of a novice speaker. In both cases, you’re performing challenging material that you still have yet to master, in front of an imposing audience. As you first begin to perform, the audience more often than not, feels like a force that causes fear rather than a welcoming group of people with which to share your ideas.

A novice speaker, for instance, is attached to the speech on the page, focusing more attention on the self-conscious will not to make a mistake then the actual connection with the listener. At this stage, the pronunciation of every word requires diligence. Intense focus is concentrated on small parts of the speech, such as words and sentences rather than the larger forms and main points of the message.

The same is true for beginning or inexperienced improvisers. Many are staring intently at a sheet of music during a performance and just trying to get by without playing a wrong note. Rather than thinking about long phrases and large sections of the tune, beginners are thinking about the individual notes of a scale and which chord tones to play.

Half the battle in performing is to attain that level of proficiency in which you don’t have to think about technique while you’re on stage. Once you do begin to acquire some technique and experience, the remaining challenge is finding a way to clearly deliver that message to the audience.

In all great speeches, as well as improvised solos, certain key elements in preparation through delivery help to create a great performance, and not all of these elements are always ones that you can hear. By analyzing the devices and traits of great speakers and implementing them into every performance, we can improve our own musical communication with the listener.

It usually takes me more than three weeks to prepare a good impromptu speech. ~Mark Twain

One jazz myth that continues to persist about improvisers is that they invent completely new material on the spot every time they solo, without any preparation. This is simply not true; behind every great improvised solo, are countless hours of focused preparation. Great performances don’t just happen, it’s what is happening in the practice room and rehearsals that dictates what will happen on the stage.

The confidence that comes with rigorous preparation is the first key to any great performance. When you have prepared material or practiced a skill to the best of your ability, you can perform securely at your peak. As you listen to any great speaker, they have an unconscious way of connecting directly with the audience, making the act of a difficult performance seem effortless and completely natural.

In these cases, the speaker usually has the material memorized, is confident with the subject matter, and makes sure to engage the audience. These are all byproducts of a well prepared and rehearsed speech. The speaker is completely familiar with main points of the speech and in turn executes them flawlessly. The same traits are also true of a great soloist or an amazing group.

Probably not. Groups that are exciting to watch and emotionally moving are ones that have rehearsed to the point where they can be completely creative on stage, taking risks with the music and finding rewards. This is true for great improvisers as well. If you’ve invested the time in the practice room on all aspects of your musicianship, when you get on the bandstand, you can actually be creative and engaging to the listener.

II. Tell your own story

Nothing is more directly sensed by a listener than the absolute conviction of a speaker. When someone is speaking about ideas they feel strongly for, it’s very obvious, almost infectious to everyone present. Like improvised solos, the speeches that are meaningful are the ones that are original and genuine not only to the speaker, but to everyone listening. The goal is a performance that creates in the moment and incorporates everyone, performers and listeners alike, into a shared experience.

The eloquent man is he who is no beautiful speaker, but who is inwardly and desperately drunk with a certain belief. ~Ralph Waldo Emerson

The speaker that speaks from his heart is not unlike the improviser that is truly playing what they hear and feel. When completely taken over by an idea or an emotion, performers rarely make mistakes or stumble over words as if trying to recall a memorized passage, but perform with a palpable conviction that translates to each person in the audience.

Just as you can tell when a speech is memorized word for word, it’s obvious if a solo has been memorized and is being played note for note. It is important to remember that you’re telling your own story every time you go to play a solo, not regurgitating another person’s thoughts and ideas note for note.

Nothing is more painful than the predictable high school commencement speech filled with Robert Frost quotes. In the same way, an improviser copying a transcribed solo note for note is just not stimulating or captivating. Even though we learn through the process of transcribing great solos, we must still create our own sound and identity as we improvise. 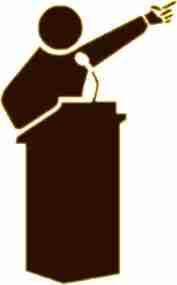 Sometimes the worst speeches that you’ve seen are ones where the speaker is visibly unexcited about the material, and this directly translates to everyone listening, making the speech a real drag. In these cases, the speakers usually speak in a mono-tonal drawl and rarely makes eye contact with the audience.

Performing can not be a self-absorbed action in which you’re only concerned with your own playing or how you view the solo. One fact that we often forget is that we are playing for an audience, conveying ideas and emotion through our music to the listener. After hours spent alone, practicing in a small room, it’s easy to forget that there are actually people listening to us when we are on stage.

As you find yourself soloing, remember to use dynamics, space and expressive techniques through your instrument to get your message across in a way that shows that you actually mean what you are playing. If you create a solo that is expressive as well as harmonically interesting, it will be that much more effective.

Whether you’re speaking or playing an instrument, it’s often the factors that don’t deal with the content of the message that grab a listener’s attention the most. For example, a speaker can have the most interesting or controversial subject matter in the world, but if the material isn’t delivered clearly or dynamically, it just falls short.

There are a number of obstacles that may cause this block in communication: the speaker may have read from a piece of paper, mumbled when they spoke, avoided eye contact with the audience or even lacked a personal enthusiasm and passion for the subject altogether. Whatever the case, in situations like this it’s very hard to make an emotional connection with the speaker or even to find the motivation to continue listening.

The same principle applies to improvising as well. You may be playing the hippest solo in the world, but if certain aspects of your playing are getting in the way of your delivery, the listener will be turned off. Here are four things that will make a difference as you deliver your musical message to the audience: