I‘m always trying to learn new bits of language.” – Michael Brecker. There are a lot of things to practice. What is truly vital to practice if you want to get better at improvising?

Plain and simple: Language. Spending time with the actual language of jazz, the recordings of the greats, should be your number one priority.

What is language in the context of jazz?

“Language embodies the world view of a culture and is unique to the culture that created it. It reflects values and concepts that are deemed to be the most important by a culture. A language describes the culture it comes from.”
–Noam Chomsky

I remember Mulgrew Miller talking to us one day about how the language of jazz has been created. It already exists. If you want to play this music, then you have to learn the language. This is a brilliant statement that I’ve never heard anyone else repeat in the same way. Everyone says that jazz is a language, but they never mention the fact that it has been created. 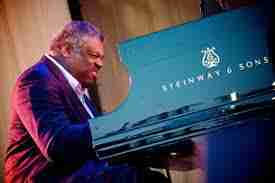 It may seem ridiculously obvious, but this subtle idea conveyed in Mulgrew’s specific way awakened me to the importance of the jazz language and that it is something that was defined by people like Charlie Parker, Dizzy, and the rest of the greats of the past. In other words, it clued me in to what jazz language is and is not.

Despite what countless books and magazine articles say, the language of jazz is not scales and chords in their raw form. All western music uses the same twelve notes. Most use many of the same chord progressions. And most use similar guidelines to create melodies.

Jazz is a particular music within the greater world of music, and the style of improvisational jazz in the bebop tradition is even more specific. So why do people think that all they need to do is learn the appropriate scales to chords and the “rules” of jazz (things like play the third and seventh on downbeats and never play the 4th on a major chord, and the ‘swing feel’) and they are good to go? An analogous example would be if I gave you the alphabet and maybe even some grammatical rules, and asked you to have a conversation with me in Americanized English. Good luck.

Do you have to think about the construction of your sentences when you speak in your native tongue? Of course not. Imagine if you had to stop every time you went to express yourself to think through all the grammatical rules. Um wait, is that a dependent clause…no, maybe it’s an independent clause?

Unfortunately, many of us are operating this way within the jazz language.

Learning language means imitating, transcribing, and understanding whole solos or lines, committing them to memory by ear, while spending a ton of quality time getting into the inner workings of the music. Lately, I’ve been spending countless hours with recordings of the greats, transcribing whole solos to memory by ear. A great saxophonist I recently had a lesson with, stressed that no matter who you are and where ever you may be in your musical development, you can never have enough language.

I hear positive effects in my playing even after a short period of time. Sure I’ve transcribed a bunch in the past, so what am I doing differently now?

Here was my general way before: mostly just lines, from anyone not necessarily the greats, writing things out as soon as I could play them, grabbing lines from different people frequently and randomly…

It’s fine to do what I was doing before, however, to rapidly understand and speak the jazz language, following the later procedure is much more beneficial. The language is not a bunch of licks someone can write in a book, it is the process of listening to & imitating the greats, as well as the musical material, the vocabulary, they played. That’s really important to understand. It is not just the material itself, but also the process of hearing and imitating it over many hours, just like a baby would learn to speak.

Who should you learn language from?

Be very selective of who you select to learn language from because it becomes a part of you. Michael Brecker frequently said his top three were Coltrane, Sonny Rollins, and Joe Henderson. How much thought have you put in to who you spend the most time with?

Where chords and scales fit in to the picture

Besides technichacl studies, which they are tremendous for, chord/scale relationships do have an extremely significant and valuable purpose, but only after you have some language to work with. Once you have language operating in your mind’s ear, you will be able to freely create phrases from knowledge of scales and chords, much like once you have a solid understanding of how to operate in the English language, you can create phrases by mixing and matching phrases at will without thinking.

Learning the language will set you apart

“I wish life was not so short. Languages take such a time, and so do all the things one wants to know about.”–J.R.R Tolkien

Despite what you may think, most people have not spent the necessary time to get a firm grasp on the language of jazz. Rather, they’ve done the reader’s digest version, or they’ve taken somebody else’s word for what they should know. Learn the jazz language yourself and I guarantee you’ll have a deeper love for this music than you’ve ever had before.