Here’s something that you’ve probably realized by now on your musical journey…that jazz improvisation can get very complicated, very quickly.

In the blink of an eye your enjoyable musical hobby can transform into something that feels a little bit like homework – a tricky exercise with right and wrong answers.

Not exactly the carefree creative outlet you started out with.

This wave of complexity happens in many aspects of playing music, especially when it comes to the chord progressions of the jazz repertoire. In fact, you might have experienced this in your own efforts to learn standards…

Tunes can quickly turn into collections of memorized chords and improvisation can become like navigating a mental maze of information. The trap is that we become so focused on the details surrounding each chord that we lose sight of the basic elements of music happening right in front of us.

So what can you do to counteract this tsunami of information and return to the simplicity of playing music? Well, the answer lies in the way you conceive of a chord progression in your mind…

As you develop as a musician, it’s important to occasionally take a step back and simplify things – to reduce the entire musical process down to its most basic elements.

In the lesson below we’ll show you how to get back to the basics with any tune you play, fundamentally shifting the way you look at a chord progression and ultimately improving the musicality of your solos.

The 2 chord types you need to know 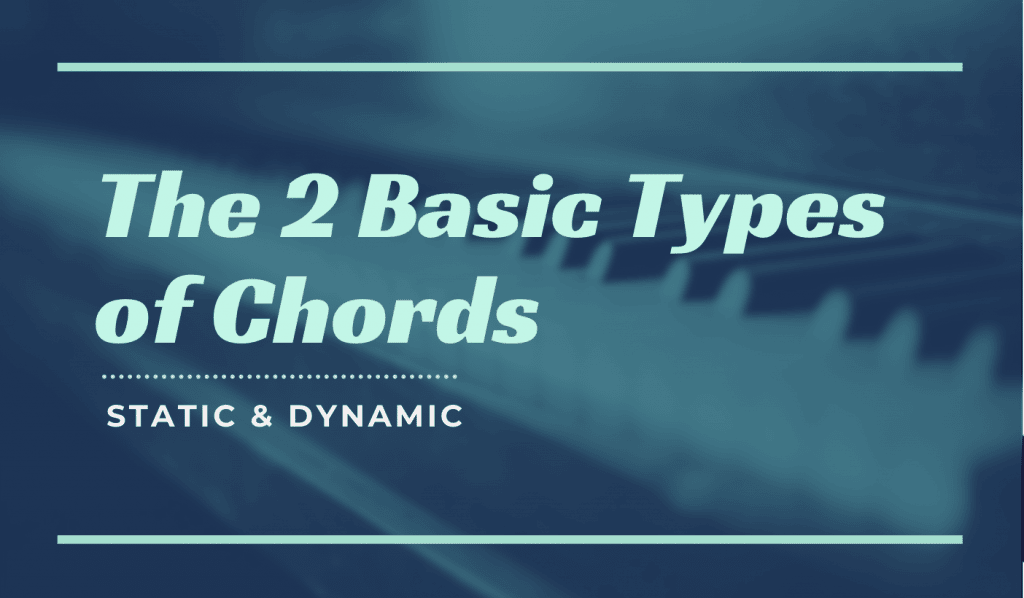 As a student, the thing that got me into trouble with practicing improvisation was trying to start from a place of complexity – essentially tackling a bunch of chords at once with dozens of scales and theory options…and always getting buried.

And this is something that I see players struggling with today…

You see, it’s hard to be creative or even musical when you’re dealing with a ton of information at once. And it wasn’t until later that I noticed that the best players were approaching tunes from a surprisingly simple mindset – one based on fundamental harmonic relationships.

This should be the ultimate goal in your own musical approach, however getting there requires a shift in the way you look at a typical chord progression…

Rather than approaching a tune as a series of individual chords, the first step on the path to simplicity is understanding that there are 2 basic chord types you’ll find in any harmonic progression: Static chords and Dynamic chords.

At the most basic harmonic level of any chord progression, you can either be on a sound or moving to a sound. That’s it!

You can think of a static chord as something like a home base. These are the arrival or resolution points within a chord progression – the harmonic pit stops on your journey through a tune:

Here you’re on a stable chord and the focus is on creating melodic ideas on a single sound. These static chords can be major, minor, and sometimes even dominant depending on the tune.

A dynamic chord on the other hand, is a chord that’s moving somewhere. These are the transition points in a harmonic progression, the bridges between the various tonal centers of the tune.

On these chords you’re looking ahead to an arrival point, creating tension, and resolving to a goal chord…

This sound is almost always a V7 chord (or a variation of some type of dominant chord).

It’s as simple as that, you’re either at home or the move to the next spot. Underneath all of that theory and memorized chords, these are the two places you’ll find yourself in in every tune that you play, no matter what.

While this big picture view doesn’t contain every musical detail or possibility, it can greatly simplify your approach and quickly connect you to the basic harmonic relationships. Remember, there’s always room to get more complex!

More importantly, this mindset opens you up to the basics of musical storytelling. The process of creating a musical idea, developing it, and resolving it – something that often gets lost in the chord/scale approach to playing. 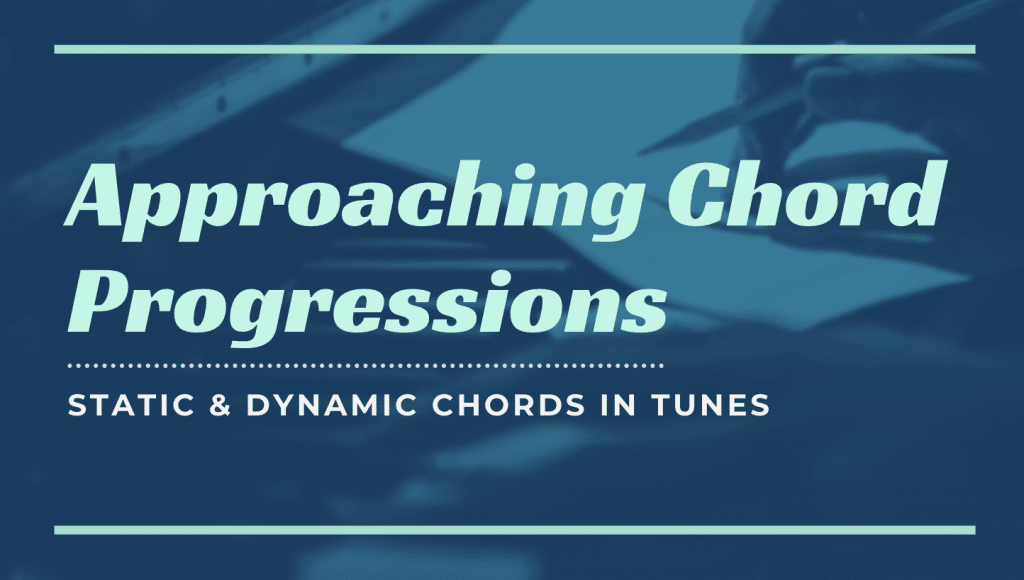 Every harmonic progression is created around the concept of tension and resolution, of movement and arrival…

After all, this is where the progress in the term “chord progression” comes from – you’re moving forward through the harmony, starting in one place and transitioning to another.

When you shift your musical approach to this simple vantage point, it quickly connects you to the vital relationships happening in any progression. For instance, let’s start with the basic chord movement of I to V7 to I:

The I chord is the starting and resolution point – the static sounds – and the V7 chord is the point of movement or harmonic tension that needs to resolve – the dynamic sound.

Also note how the dynamic chord is connected to or paired with the static chord that it resolves to, V7 to I as one unit.

This is the basic foundation on which every other chord relationship is built: static chords & dynamic chords moving to static chords. It’s the same for complex jazz standards as it is for the most basic musical progressions…

To illustrate this point, let’s look at how these two types of chords function within the context of some common jazz standards…

Take a listen to the opening sequence of the jazz standard Cherokee:

While the natural tendency might be to memorize these five chords and apply the stuff you know to each, let’s shift our view instead to the way these chords function.

In this progression some chords are arrival points (static) in the harmony and some are transition chords (dynamic):

The static chords are the I and IV chord (Bb and Eb) and the dynamic chords are the Bb7 and Ab7 chords that resolve to each static chord. This simple shift in perspective will simplify your melodic approach and lock you in to the forward motion of the underlying harmonic movement.

Remember, every chord in a progression doesn’t carry equal weight, some are strong arrival points and others are simply the transitions that get you these points. Your job is to know where you’re going and how to get there.

Next let’s take a look at a simple I-VI-ii-V7 turnaround or the opening to Rhythm Changes:

Again, instead of approaching each chord individually with separate scales, look at the basic dynamic/static relationships at work…

You have 2 static (Bb and C-7) and 2 dynamic chords (G7 and F7) that resolve to these static chords. Also, notice how in this progression a minor chord is an arrival point (G7 resolving to C-7).

With these goal and transition chords in mind, it’s much easier to create musical ideas – you’re either making a melodic statement or creating tension and resolving to a goal chord.

What’s more, understanding how the dominant or dynamic chords function within this progression is the key to adding in various chord substitutions:

These (tritone) substitutions have the same function as a dynamic chord resolving to a static chord, but with varying levels of harmonic tension.

Finally we’ll take a look at Giant Steps…yes, even a tune like Giant Steps can be reduced to static and dynamic relationships:

Even though the chords move quickly, you have static chords and dynamic chords, V7 moving to I:

Again, by simplifying the progression you’re emphasizing the harmonic movement rather than simply inserting scales or patterns.

The surprising thing about Giant Steps is that the entire tune can be reduced to 3 static chords (B, G, Eb) and their related 3 dynamic chords (D7, Bb7, F#7)… 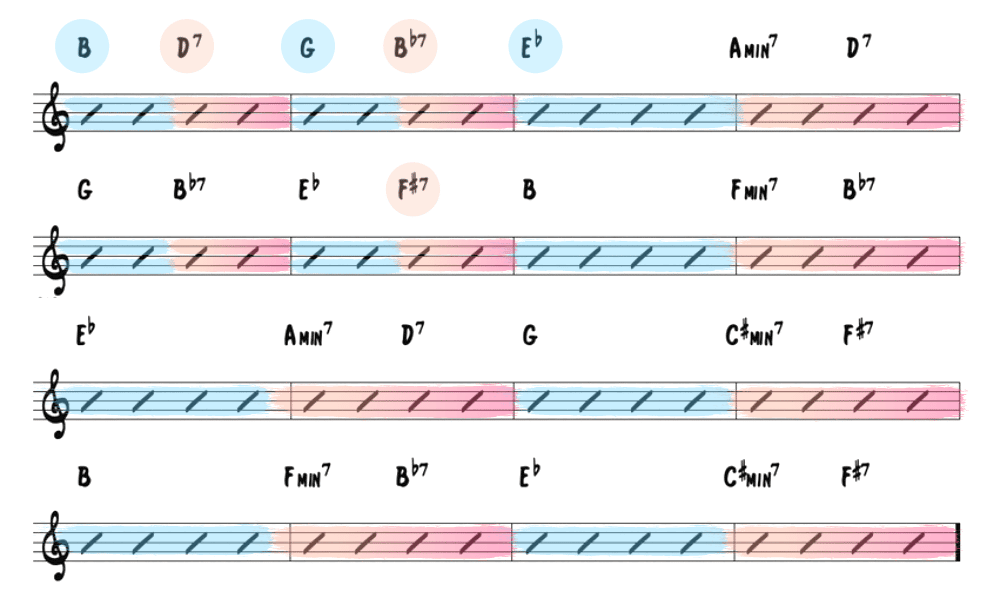 If you’ve mastered something as basic as static and dominant chords, you can already play Giant Steps!

Pick any tune or jazz standard and you’ll find these two types of chords. The ability to quickly identify the tension and resolution points in a progression is essential for creating strong melodic lines.

The next step however, is having music to play over these two fundamental chords. And to be a successful improviser you need tools for both of these musical situations… 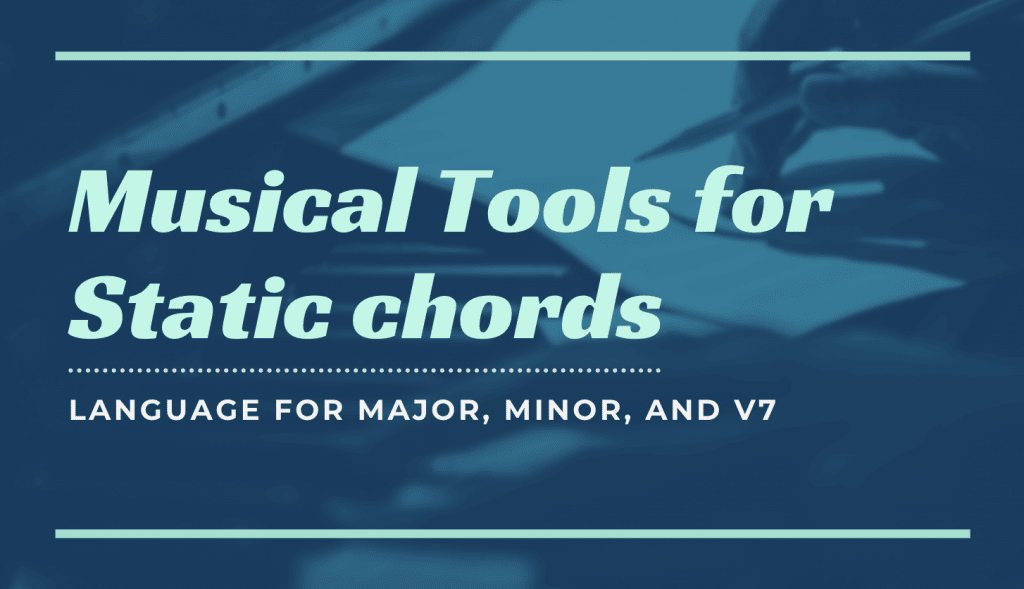 Over static chords your primary goal is to make melodic statements.

The bottom line for making headway here is simple: Can you create melodic lines and interesting ideas over a single static chord??

I’m not talking about playing a major or minor scale, rather creating musical ideas over this single sound.

The truth is, this is harder than is sounds. And to be honest, if someone asked me early on to play melodic lines over a major chord by itself, I would have had trouble.

Developing this skill goes back to the concept of having language over one sound – namely transcribing ideas from your favorite players for these specific harmonic situations.

A good place to start is with Major 7 chords. Challenge yourself to find 3 pieces of language that you can use as a melodic starting point with on Major chords in every key.

Here are a few things to keep in mind as you hit the practice room: 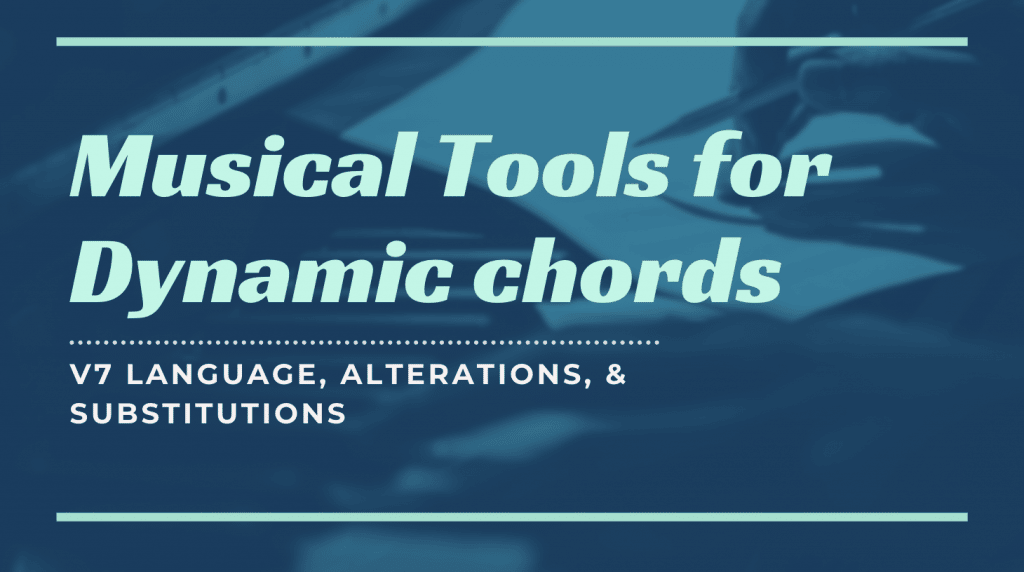 Mastering dynamic chords come down to the movement of V7 resolving to I, of perfecting the art of creating tension and resolving to a goal chord.

Remember, no matter how complex a progression or tune is, at the root of any harmonic movement is V7 moving to I

So the question here becomes, what tools and techniques do you have for playing over V7 sounds?

Here are some places to start in the practice room…

These are all a part of dynamic chords, of V7 resolving to I and can be applied to any of the dynamic chords you find in a progression.

But this a vital starting place in your understanding of harmony and creating a melodic approach that’s connected to the underlying chord progression.

And it’s a useful tool in getting beyond the habit of simply memorizing the chords to a tune and trying to piece them together.

Take a few extra minutes after learning the melody and chords, and think about these harmonic relationships in a new light – you’ll be surprised by what this does to your solos!