A reader recently wrote us asking about what we think about while we improvise. He writes: “I’m a tenor saxophonist and still pretty new to the whole improvising scene. I was wondering what musicians “think” in their minds while improvising. Are you consciously focused on the scales and chord structures? Or do you just not think anything and let your subconscious play the keys and do the work?” 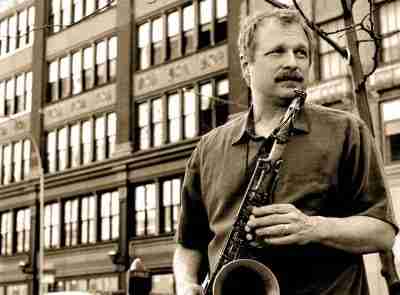 Rich tersely answered, “The Chords.” He went on to say, “What else would you be thinking about?”

But it’s not quite that simple. As our conversation ensued, I realized a number of clarifications to what he meant by “thinking.” In terms of thinking about the chords…he has the chords “burned” into his brain to the point that they are just there. In that way, he’s always aware of what chord he is on.

One of his examples was when we were playing a tune and he slipped in an Eb minor chord right before a D minor chord. He expressed, “How would I have known that I could put that Eb minor chord in, if I didn’t know I was about to be on a D minor chord?” He further stressed that he could pre-hear where the chords were going in his head and how each note sounded againset the chord. For example, if he was on the fifth of the chord he knew by the sound of the note against the harmony.

Rich has thought about the chords to a tune so much that when he plays, the changes are readily available to him with barely any thought. So is he “thinking” about the chords? In terms of the reader’s question, yes, he is thinking about the chords. He is not thinking about the weather or what he ate for breakfast; he is focused on the harmony of the tune as it progresses. But the amount of thought required for him to be aware of the chords as they pass is so minimal, that it can barely be classified as thinking.

Rich also mentioned that he has occasional thoughts while he’s playing that keep him developing his solo in a preferred way. For instance, if he just played a bunch of fast lines, he’ll think, “Maybe I’ll balance out those fast lines with something a little slower now.” These  thoughts are more instinctual than conscious.  He’s put in a lot of time with the changes to achieve a place of just knowing. On an intuitive level, he’s still thinking, “I’m on D minor, now I’m on G7,” and so forth.

This would be in direct contrast to not being aware of the chords while playing and simply letting what comes out, come out. I have heard teachers say, “Do not think about the chords while improvising and just play what you hear.” How can you hear what to play if you are clueless to where the harmony is going? You have to pre-hear the harmony yo are playing over before you can hear what you are going to play.

Rich is just one opinion, but I highly recommend you consider his advice. Anytime I don’t listen to his advice, I end up where his advice would have taken me, but months later.

Burn the chords into your mind

I suggest you “think” so much in your practice sessions about the chords, that when you go to perform, you just know the chords, just as Rich Perry does. Any time you have to conciously think “what chord am I on” It’s going to break up your flow. So do your thinking ahead of time. Then, when you do let loose on a tune, remain aware of where you are in the form at all times. Rich told me you should always know what chord you are on. He would actucally have me play and randomly stop me in the middle of a line and say, “Forrest, what chord are you on?”

The most important thing to remember about chords is that they represent sounds. Saying that almost sounds stupid, but so often we blindly memorize chords to a tune without hearing them. You must get the chords operating in your ear. The best way to do this is to listen to recordings of the tune, figure the harmony out from the recordings, and play the chords on the piano. The chords are symbols for sounds. You gotta get the sounds.

In terms of thinking of the chord/scale relationship, the best horn players I have met mostly think in terms of chords (Eric Alexander specifically told me he thinks of chords over scales unless it’s a truly modal situation, such as phrygian), whereas many pianists I’ve met, may think more in terms of scales. I think it has to with the layout of the instrument and the fact that you can play chords on a piano that accounts for this difference.

Chords contain all the tones of a scale by arpeggiating to the 13th. Essentially the chord and scale in the context of what jazz educators refer to as the “chord/scale relationship” are the same thing so it is not necessary to think about the chords and scales as two separate entities. Why would I ever think about C Ionian over C major? I would think C major. Period. If I want a #11, I add it. If I want a #5, I add it.

In an interview with Frank Kofsky, Coltrane responds to Kofsky’s question about whether he plays everything he hears by stating, “There are some set harmonic devices I know that will take me out of the ordinary path, if I use them.” He’s clearly thinking about the chords, or more precisely, thought a lot about the chords while practicing, to the point where they were second nature during performance.

To sum up, yes, when you’re improvising, you are thinking about the chords, however the thinking is more of an awareness than conscious thought. The more time you have spent thinking about the chords in the practice room and getting their sounds in your head, the more this “thinking” turns into an awareness. That is the goal. You always know what chord you are on and where you are in the form, but barely have to think about it.