Let me guess…You’re smart. You know your stuff. And you have a sparkle in your eyes when you talk about music. You take lessons and you play in a band, and when you find a few free minutes you’re practicing your instrument. But when you improvise it doesn’t sound like you at all.

No matter how hard you try, you’re always stuck at square one thinking about the right notes to play.

You copy licks and insert scales into your lines — but now your solo sounds lame. You try yet another new melodic concept. That’s even worse.

The problem isn’t your effort or even your talent…

It goes back to the same thing that’s stopping many fine players from getting the music that’s inside their minds out of their instruments.

I’m talking about the trap of music theory.

What exactly is music theory?

Music theory means many things to many different people…

To some it’s a confusing mess of letter names and scales. Each solo is a struggle to make sense of F#’s and Ab7’s, melodic minor scales, dorian modes, circles of 4ths and 5ths…

To others it’s a class that they begrudgingly take filled with dry text books and rules about every aspect of a musical line.

And for some it’s a system of notes and chords that they hold on to for dear life so they can play the “right notes” in a solo.

Music theory is simply a way to talk about the sound of music.


It’s a way to conceptualize the construction of the sounds that you listen to everyday. A way to say: “That note is an ‘A’, That sound is a minor 7th chord, and that song is a 12 bar Blues…”

Every theory concept that you learn is connected to real sound. And this is when music theory becomes the most useful – when it’s directly related to the sounds that you play everyday.

But getting to that point is not always easy… 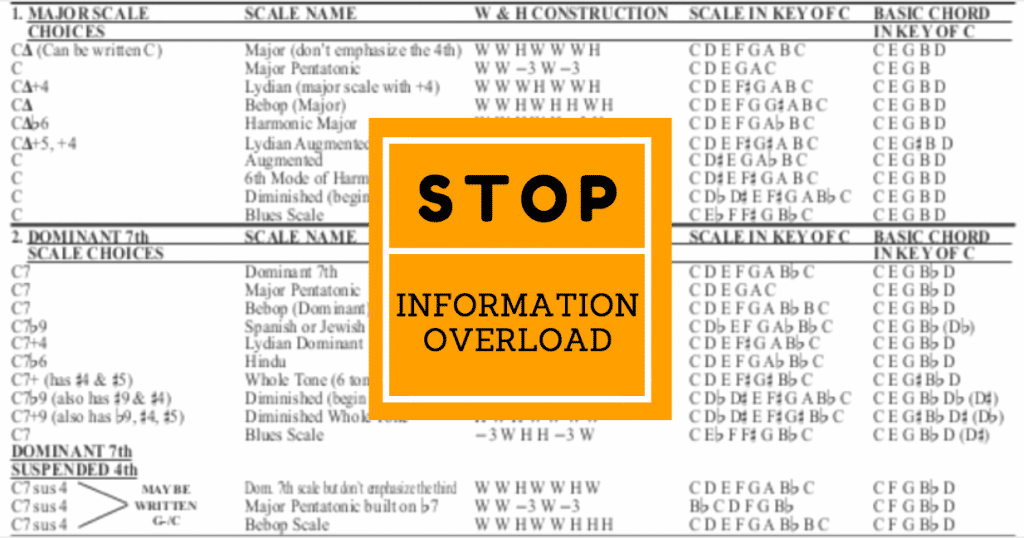 I remember in the 7th grade my jazz band director passed out a scale syllabus to prepare us for improvising. It was a long and confusing list of chord symbols and scale names and letters…

And each time I tried to improvise with this information my brain suddenly froze up. Before I could even play a note of a solo I was stuck frantically thinking about which note I should start on or which scale I should use.

This is exactly what happens to many players that practice improvisation – they become paralyzed with the sheer amount of music theory information.

As a result many good players get distracted and stuck worrying about altered scales, substitutions and other esoteric concepts before they have the basic concrete elements of music mastered.

And this will hinder your creativity when you need it the most.

So let’s make things simpler for a moment…

Rather than trying to tackle that mountain of information or chose from hundreds of scales every time you try to improvise, look at the musical elements that pop up over and over again in the majority of jazz standards.

“What am I actually going to encounter in the tunes that I play as an improviser?”

The 3 Pillars to Understanding Jazz Theory


What is the foundation of the tunes you’re trying to learn and play solos over?

It’s not pentatonic scales or chord substitutions. And it’s not a lydian chromatic concept or flat-9’s and sharp-11’s…

Below all the complex chords and scales everyone talks about are 3 core elements that make up the foundation of jazz theory. They are:

That’s it! Look through hundreds of jazz standards and you’ll find the same three things over and over again…

This is the music theory foundation that you need to start with in order to be successful as a soloist.


On top of this you can get as advanced as you want. You can add altered chord tones, fancy scales, and tritone substitutions to your heart’s content…

But at the end of the day you’re still improvising over these 3 basic structures. The sooner you ingrain them the easier it will be to navigate any musical situation.

The good thing about music theory is that it’s symmetrical – the rules are the same in every key.

And lucky for you there are only 12 keys.

Once you learn a scale, a chord, or a chord progression in one key, the relationship is exactly the same in every other key. So start with one!

Let’s take the key of B Major. Your goal is to master this key from the major scale all the way to the diatonic chords.

For example, begin with the Major Scale:

Then practice that scale in different intervals:

Start with 3rds and continue all the way through 4ths, 5ths, 6ths, and 7ths. Remember to play each in all four directions.

Next play the seventh arpeggios on each scale degree:

(Check out this article for some more great scale exercises!)

Finally memorize the diatonic chords of each key and play them on the piano:

That’s one key. Now master it and move on to the next one. Do this in every key. Remember there are only 12!

II) Learn the 4 Types of Chords

After you’ve ingrained all of the 12 keys, it’s time to focus on chords…

In the majority of jazz standards you’ll encounter 4 types of chords:

Start by understanding the structure of each chord type. A good exercise is to play each chord quality in one key at the piano:

Then on your instrument arpeggiate each chord from root up to seventh and back down. For example on a B Major 7th chord it would look like this:

Continue through each key and chord type in the manner shown above:

For some further reading on developing language over these chords check out these articles:

Now that you have the know the 4 basic chord structures down, you need to know how these chords fit together.

However there are actually a handful of common chord progressions that are used over and over again. Start simple and gradually get more complex.

Begin by learning the Dominant to Tonic (V7 – I) relationship in every key:

When it comes to memorizing chord progressions the best exercise you can do is to visualize the information in your mind. Try this with the V7-I progression in all 12 keys.

Next move on to the ii-V7-I chord progression. Start with one key and gradually move to the other 11 keys:

After you’ve done that, check out this article for some more common chord progressions to learn. Study each one and learn it in all 12 keys.

Before you get frustrated or confused with the amount of jazz theory to learn, make it simpler by focusing on the musical elements you encounter in the tunes you play.

Remember there are 3 main pillars in the foundation of jazz theory:

Take one section at a time and master each one.

Start with the 12 keys and gradually move on to chords and progressions. It may take you a few weeks or a few months to get these concepts ingrained depending on your skill level and experience.

Remember, don’t let something like music theory get in the way of the real reason you’re playing music!