It’s time to get down to business…The business of finding out if you’re on track to achieve your musical goals and develop into the musician you want to become. While we often focus on the solos of master musicians and important improvisation concepts here at JazzAdvice, today we’re going to focus on you. Specifically the skills you’ve developed on your musical journey. It’s time for your “musical audit.”

But don’t freak out! An audit is simply a systematic inspection of a business’s accounts to ensure accuracy. And for musicians, this means testing your skills and knowledge to ensure that you’re on track in the essential areas of improvisation  – theory, ear training, and tunes & language.

The truth is, the way we see our musical-selves is not always entirely accurate. In your daily routine it’s easy to think “Sure, I know music theory” or “Yeah, I have decent ears” or “I know enough tunes.”

However, we rarely get specific or put ourselves to the test…

What exactly do you know? Where exactly do your ears start getting fuzzy with the melody and harmony? When and where do your musical skills hit a wall?

So for the next 30 minutes grab your instrument or pull a chair up to the piano. Here are 36 questions that will cover the stuff you should’ve learned in school and the techniques you need to know get to the next level as an improviser.

Being an improviser, or rather a successful improviser, means coming to each playing situation with a certain set of harmonic and melodic skills.

Whether it’s a rehearsal, a jam session, or a concert you are expected to have a basic level of musical knowledge and technique. And if your aim is to improvise a great solo, you need to know this information on an even deeper level.

One area of musicianship that all players need is a working knowledge of music theory. Here are 12 questions to put your theory skills to the test…

Scales alone aren’t the hidden secret to improvising over your favorite tune, rather a necessary theoretical and technical foundation for your musical approach. Memorize them well in all keys so in performance you can focus on the creative aspects of improvisation!

As you’re developing your musical approach, the bebop scale can be an effective tool for navigating V7 sounds and creating linear motion. Study how players like John Coltrane and Sonny Stitt utilize this scale in their lines.

As an improviser, theory is vitally linked to technique. Knowing the key signature, practicing a few scales, or memorizing the chord progression isn’t going to cut it. Along with knowing a musical concept, you need to be able to play it.

Before you can play melodic ideas over a ii-V or a turnaround, you need to have these chord relationships ingrained in your mind.

A lot of musicians get hung up on the theory of improvising – the scales, the different chord types, and the various substitutions for chord progressions. But this doesn’t have to be the case…

The essential theory that you need to know to play a great solo is something you can mentally grasp and ingrain in a short amount of time – if you focus on the right exercises.

If you’ve found yourself stuck on some of the questions above, don’t despair. Start by focusing on the fundamentals of theory and visualizing these concepts in every key. A little mental practice each day will yield tangible results.

For a more in-depth approach, we’d recommend checking out our Visualization for Jazz Improvisation course, which covers all of this and more.

A musician’s ears are the key to creative improvisation. Like a photographer’s eye for composition or painter’s sense of color and light, your ears are the tool that will help you unconsciously identify the important elements of music and unlock your creativity.

Without a developed ear you’re stuck trying to improvise with a mental grasp of music theory – the frustrating situation many beginning improvisers find themselves in, making the process of creating a solo so hard.

This is why we’re going to put your ears to the test. So how good are your ears when you take away the sheet music or toss out the Real Book? Let’s find out…

Ear training for the improviser needs to go beyond the basic interval recognition that you find in most courses. Whether you’re practicing, performing or just jamming with your friends, you need to be able to identify and internalize the melodic and harmonic aspects of a piece of music.

These skills directly relate to your ability to transcribe solos, to learn tunes, and to figure out chord progressions. This is why ear training is so important.

If you think your ears need some work and you want quickly improve them, be sure to check out our Ear Training Method course for an all-inclusive and in-depth instruction on the musician’s ear. 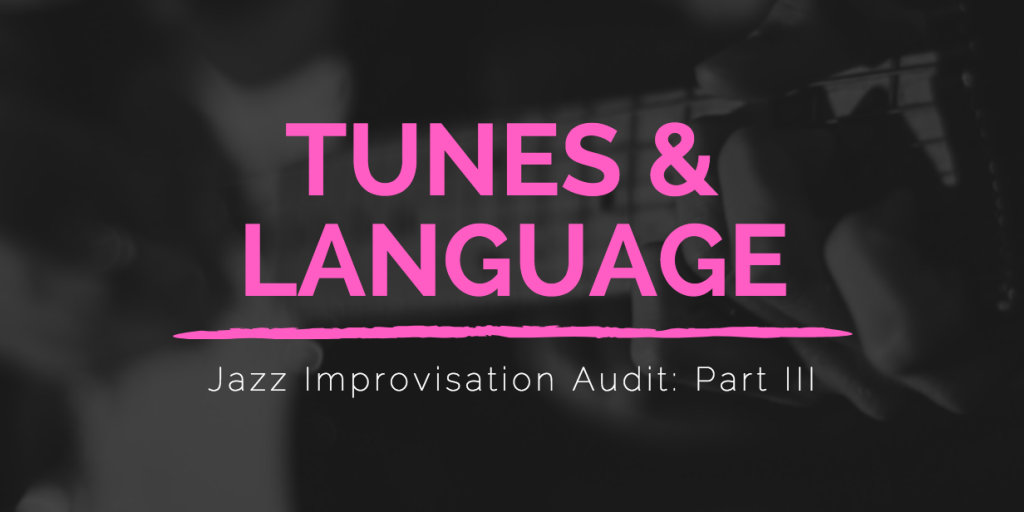 Improvising isn’t just about scales and theory… And it’s not about the various exercises that you faithfully practice in every key.

It’s all about that moment when you get out there and put these skills to the test in the real world. Making music with other musicians, playing tunes, and improvising in front of an audience.

You see the study of jazz improvisation isn’t confined to a book, a classroom, or the licks you run in your practice session. It’s vitally connected to the history of musicians that came before you and the tunes in the jazz repertoire.

As a soloist you need to have a working knowledge of the language of your musical heroes and the common standards every improviser should know. Along with this harmonic and melodic information, you also need to learn to play with time, swing, and style.

This is where you combine your theory knowledge and technique with your ear training to learn the language of jazz. Let’s see what you know…

As you develop your vocabulary and expand your listening, strive to transcribe melodic techniques and language over the 4 main chords types you’ll encounter in the jazz repertoire: major, minor, dominant, and half-diminished.

When you find a piece of language or musical concept that you like, analyze why it works and learn it in every key.

Keep in mind that when you transcribe a line you are looking for more than a lick to insert into your solos. Aim to understand the musical concepts at work behind the line so you can transfer and recreate the techniques in your own solos.

Listen to this musical phrase from Dexter Gordon and repeat it on your instrument:

This is where your theory and technique come into play. Do you have technique worked out in all keys? Can you visualize the progression and intervallic content as you move to new keys?

At some point on your musical journey you need to transition from the study of the theory and technique of music to the study of creating music.

Beyond the scales and chords, your goal as an improviser is to create melodic ideas that have sound, style, articulation and time. If you’re still stuck thinking about scales and chords instead of creating lines and solos that you hear, check out our newest course Melodic Power.

Inside you’ll find essential techniques, exercises from real solos, and in-depth instruction for harnessing the power of melody over the common chords of the jazz repertoire.

So how did your musical skills fare?

Better than you thought? About where you guessed? Or not even close??

If you’re serious about improving as an improviser you need to be honest with yourself and identify the areas of your musicianship that need work. The 36 questions above run the gamut from fundamental knowledge to the more advanced techniques you’ll need to know as you advance on your musical journey.

In each section we’ve included links to relevant lessons that will help you build these skills, covering the areas of theory, ear training, and jazz language.

Once you know what you need to work on, it’s crucial that you know how to practice and that you craft an effective practice plan.

Along the way, remember that these skills or problem spots aren’t conquered in one day – they take consistent daily practice that is focused and goal-oriented. However, a little work each day will gradually lead to the big musical goals that you have.

If you put in the work, one day you’ll become the musician that you want to be.