Let’s be real. New Year’s Resolutions don’t work. Every year, January 1st comes and people act as if they’re going to entirely reinvent themselves, that this is the year. The year that’s different than all other years. The year of making things happen and achieving goals.

But just after a few weeks, the smoke from the fireworks clears and we’re back to square one. Back into our routine and back into our old habits. Our lofty goals fade away to the background once again, patiently waiting to resurface at the turn of the next new year…

What went wrong? Is there a solution? I’m a motivated person, is there a way I can actually accomplish my musical goals this year?

I’ve got good news for you. YES. It’s absolutely possible to accomplish your musical goals this year—or at least make huge progress on them—but you need to transform how you think about musical goals.

In general, when it comes to musical goals, goals are much larger than they appear. 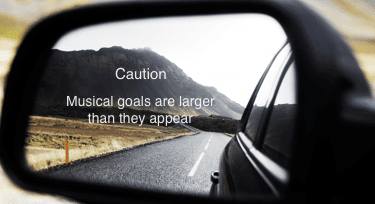 For example, it sounds simple enough to “transcribe a solo,” but what get’s lost in that brief description is the countless hours it takes to learn even one phrase of a solo, or the agony to figure out the chords. Transcribing a solo is a whole lot more than just getting the notes.

Here’s an assumption that you can pretty much depend on all the time: there are no small goals when it comes to music.

So if there are no small goals in music and the standard write your goals down and make a plan method doesn’t work, what can you do?

There are 3 steps that if you follow this year, you’ll accomplish more as a musician than you ever dreamed possible in 2017.

The first step has to do with your goals—how you think about your musical goals and how you define them. By using one little trick, you’ll actually get started on them (getting started is always the hardest part) rather than putting them off indefinitely.

The second step concerns your practice—how you actually spend your time in the practice room.

And the third step is about your musical self—the true musician you wish to become.

So you have a goal. That’s great. It gives you direction, something to strive for, and something to focus your time on. All good things.

But having a goal is not enough. You need a plan…

At this point, the planning stage, you conjure up some elaborate step by step plan that you’ll diligently follow day after day until voila, you’ve achieved your goal!

You can wake up now.

We’ve all tried it and it doesn’t work. It sounds great in theory and your mind can see how you can logically get there, but getting your body to follow through with the work is the real struggle.

This is where this little redefining or rephrasing tactic comes in.

Take all your lofty goals and simply rephrase them in terms of a super small daily task that you can easily accomplish, even when you’re tired or don’t want to do it.

Now, here’s where it gets interesting. You can spend more than 5 minutes a day if you want, so once you get started, if you’re feeling it, you’ll naturally tend to spend more time because you’ve already done the hardest part: you started.

Remember, musical goals are different. They’re difficult, frustrating, and continuous, meaning even after you achieve them, there’s a higher-level to be obtained. That’s why this little trick works wonders on them.

Step 2: SLIM DOWN YOUR PRACTICE: Focus on a tenth of what you think you should focus on

We get emails every single day asking us how much to focus on during a practice session and the truth is, it’s up to you.

But, after dealing with this problem for many years, I’ve found that the less I focus on and the more time I spend on it, the better. So, here’s a general rule I’ve come up with that you can modify for yourself.

Whatever you think you should be practicing, focus on a tenth of it.

Yes, this is meant to be extreme to get you in the habit of focusing on less.

I know what it’s like. You get in there and you’re excited to play your instrument. You get carried away and jump from topic to topic, not really excelling at any.

The goal is permanent and steady improvement from your practice.

This concept is not difficult to apply and that’s why it’s powerful.

When you get to the point where you’re thinking, “Man, that’s a really small amount of information to focus on,” then you’re on the right track.

Step 3- DEFINE YOUR MUSICAL SELF: Spend time with what speaks to you

Music, especially jazz, is an incredibly personal pursuit. It’s unlike many other pursuits where there’s a very defined structure and an obvious path from Point A to Point B.

Off course there are general tactics that work well, and amazing players that nearly everyone will love, but there’s no reason to ignore your own voice, even if you’re an absolute beginner.

After all, you have ears, don’t you?

You know who you like to listen to. You know what tunes you have on repeat.

You know what moves you. No one else does.

There’s a difference between being wowed and being moved.

I listen to a lot of players, tunes, and bands and they wow me, but emotionally they make me feel nothing. If you focus your practice energy on what wows you and not what speaks to you emotionally, you’ll never truly be aligned with your own voice.

Not to say that someone or some thing can’t both wow you and move you—John Coltrane definitely does that for me, but it’s especially the “move” that we’re after.

What truly speaks to you?

It all comes from listening. When you’re listening, pay close attention to how you feel. What specific effect does a player, a solo, or a song have on you? What vibe do you get?

There are no rules. Pick solos or stick to artists that truly move you. There are a million standards and no one knows them all. Pick the tunes you love to work on.

Most people’s problems stem from them choosing material to work with that they don’t actually love.

Nobody can tell you who you wish to become.

To “Learn” a tune means something different to everybody. Does it mean to learn the melody? The chord changes? To solo over it?

Does it mean learn the tune by ear? The changes by ear? How well do you need to solo over a tune to “know” it?

See what I mean?

The seemingly simple goal of “Learning a tune” isn’t really that simple at all. In fact, it’s quite difficult. And that’s why you need specific strategies to deal with musical goals.

Using the 3 steps you learned today, you can make fantastic progress this year on all your musical goals.

With these tactics in your back-pocket, 2017 is bound to be a year of tremendous musical progress for you!