In a recent post: A Blueprint for Building Your Repertoire, I outlined some ideas to ponder while creating a repertoire of tunes. Concepts like how to learn, listen to, and how to approach the Great American songbook as you prepare to build your own repertoire.

However, the real work begins when you get into the practice room and start learning these tunes one by one. As I mentioned in the previous post, you don’t have to start over every time you learn a new tune. Many of the songs that are standards are related in some way, whether it’s a similar harmonic progression, form, or melodic construction.

For this article, I’ll expand on the ideas of form and harmonic construction and their use in the standard jazz repertoire.

Many jazz standards are written within the same common forms: 12 bar blues, 32 bar AABA, and 32 bar ABAC. If you understand the construction of these forms and can hear the different sections, your work at learning all these tunes will be significantly easier.

One of the most common forms for jazz standards is the 32 bar AABA format, 8 bar A sections and an 8 bar bridge. An immediately recognizable example of this form is the chord progression rhythm changes:

Some other common 32 bar tunes in AABA are: Confirmation, Body and Soul, Easy Living, Have you Met Miss Jones, I Mean You, Lazy Bird, A Night in Tunisia, Softly as in a Morning Sunrise, Take the A Train, etc.

The other common form you’ll encounter as you build your repertoire is the 32 bar ABAC form, 8 bar sections once again, but here the second B is slightly altered making it a C. A good example of this form is the tune There Will Never Be Another You:

Some other 32 bar tunes in ABAC are: Airegin, But Not for Me, Ceora, Days of Wine and Roses, Four, If I Were a Bell, Just Friends, Like Someone in Love


In every standard that you’ll encounter, with rare exceptions, there will always be a ii-V7 or turnaround at some point in the chord progression. If you’re able to immediately recognize this progression, whether it’s in the tonic key or another key, you’ll be able to figure out the progressions to countless standards and retain them much faster.

Another aspect of harmonic progressions that will help you to quickly build a repertoire, is to look at the first chord of the tune. Many standards begin on the I chord or a ii-V7 in the tonic, but some do not and it’s worth knowing what those are.

A few tunes in the standard jazz repertoire begin on chords that are unrelated to the I chord or even begin in a completely unrelated key. For example, take Stella by Starlight. This tune begins on the #iv chord, E-7b5, while the tune is in the key of Bb. Knowing and hearing that Stella begins this way, as well as other tunes that don’t begin on the root, will be a great advantage.

The final aspect of looking at harmonic progressions, is to know which standards are reharmonizations and to know the original tune that these reharms came from. One of the devices musicians during the 1940’s (Parker, Diz, Bud Powell, Art Tatum, Monk, etc.) used to create new harmonies, was to reharmonize the popular standards of the day with the concepts that they were developing.

Charlie Parker is famously quoted about his revelation over the tune Cherokee in Nat Hentoff and Nat Shapiro’s book, Hear Me Talkin’ to Ya:

I’d been getting bored with the stereotyped changes [harmonies] that were being used all the time. … I found that by using the higher intervals of a chord as a melody line and backing them with appropriately related changes I could play the thing I’d been hearing. I came alive. 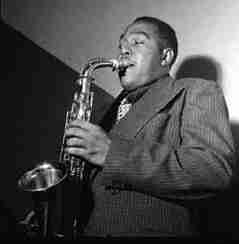 Much of the bebop language was built upon existing forms and harmonic progressions. Knowing where this language came from and how these concepts were built are essential. By studying the original forms and tunes that these reharmonizations were derived from, it will become much easier to understand and add these tunes to your arsenal.

By studying and memorizing ten key tunes you can cover the majority of the progressions and forms you’ll encounter in every other tune. If you truly learn these key standards, aurally and mentally ingraining the harmonic progression and form of each tune, every other tune you go to learn will be much easier. In turn, making that huge list of tunes seem much smaller.

Ultimately, you can get great benefit from learning any standard correctly and, since many of these tunes are related, there is overlap from tune to tune. This list of ten tunes, consists of tunes that are the most prominent and beneficial to creating a versatile repertoire.

The 12 bar blues is one of the most standard forms in jazz. If you learn the blues in all keys, you’ll cover V7 sounds, ii-V’s, and minor ii-V7s in every key. Plus the blues is the perfect platform to develop a melodic idea throughout a simple progression.

Charlie Parker reharmonized the blues by developing a way of inserting ii-V’s into the 12 bar blues progression to create more harmonic interest. Throughout the first eight bars, he utilizes ii-V7’s descending in whole-steps and then half-steps. This is commonly referred to as a “Bird Blues,” and can be found in tunes like Blues for Alice, Freight Train, and even the descending ii-V’s in the first four bars of Confirmation.

Just like the blues, knowing rhythm changes inside and out in all keys is essential for any serious improviser. Being able to creatively navigate the I-VI7-ii-V7 progression throughout the 32 bars of rhythm changes takes some work, but the payoff is tremendous because this progression is present in nearly every standard. Also, the progression on the bridge of V7 chords moving around the cycle of fourths (in the key of C: E7-A7-D7-G7) is extremely useful to know and invites the possibility of reharmonization, such as the substitutions found in The Eternal Triangle.

This 64 bar AABA tune by Ray Noble was a standard when Parker began experimenting with substitutions over the changes and continues to survive to the jam sessions of today. The difficult part of this tune lies in it’s tempo and in navigating the descending ii-V’s on the bridge which begin a half-step above the tonic key.


All the Things You Are

A tune that every improviser should know and one that take significant work and study to create original and interesting ideas over. The first chord begins on the vi chord which takes some getting used to. Also, by learning this standard, you’ll be covering ii-V’s in five keys.

How High the Moon

This tune has a very useful progression in the first four bars: going from the Major I chord to the parallel minor i chord, and again in the next four: Major bVII chord to a parallel minor bvii chord. This concept is also used in tunes like On Green Dolphin St., I’ll Remember April, and even going from the I7 to the IV7 chord in a blues progression. This standard is also the basis for Bird’s reharm Ornithology.

Often viewed as a beginning tune for improvisers, Stella has some uncommon progressions that are anything but easy. One tricky aspect is that the tune begins on the #iv chord, (E-7b5 in the key of Bb). It’s somewhat confusing when you don’t start a tune on the I chord, so starting on the #iv will take some dedicated mental and aural work to get it down. Stella is also a great work out for minor ii-V’s: the opening measure is a minor ii-V and the last 8 bars have a series of minor ii-V’s descending by whole-step.

This traditional tune is probably not familiar to a lot of people, but everyone has surely heard of it’s bebop incarnation: Donna Lee. Before learning Donna Lee, check out Back Home Again in Indiana and the progression will be much clearer.

Like the tune Indiana, Whispering is another traditional tune that is more recognized for it’s reharmonization by Dizzy Gillespie: Groovin’ High. In the first four bars, the progression moves from the I chord to the VII7 chord, which is not encountered all that often. Getting this tune down is a great preliminary step to learning Groovin’ High.

Lover is a great work-out for a progression that descends chromatically. The original moves root wise down by half-step and the bebop reharmonization moves down chromatically with ii-V7’s. By learning this tune you’ll nearly cover ii-V in every key and

This standard, 64 bars long, focuses on going around the cycle with V7 chords. Starting on the dominant VI chord, it moves around the cycle until reaching the tonic. The tough part here is the tempo and having language over V7 chords for extended periods of time. Some other melodies written over the changes to Sweet Georgia Brown are Mile’s Dig, Clifford Brown’s Sweet Clifford, and Kenny Dorham’s Windmill.

Learning standards, just like transcribing solos, is difficult and slow at first, but once you get past your first one, things get easier every time. Many times we try to tackle difficult tunes or too many tunes at once before we have the basics down. Start with the blues and simpler tunes and build your repertoire from there one standard at a time.

These ten standards are just the beginning to building a solid repertoire of tunes. The list above doesn’t cover every harmonic progression that you’ll encounter, but will give you a solid foundation to navigate the majority of tunes out there.

Remember that your method of learning is key here for internalization and advancement. Listen to it -> Sing it -> Play it. By following this simple process, anything that you are learning will be automatically ingrained. As you study and memorize these ten tunes and develop an in-depth knowledge of form and harmony, you’ll have a great foundation for building your jazz repertoire.

Master the Transcription Process: A Step-by-Step Guide to Learning from the Pros (Premium)

How to Learn Jazz Improvisation: The Ultimate Guide

Master All the Things You Are – Part I: The A Section (Premium)