In this article I’ll explore some tendencies that I’ve observed in the recordings of my heroes. Of course, your personal observations would result in different conclusions, which is why I highly suggest you transcribe and find tendencies that you observe. One thing to remember as well: These are not rules. They’re just things to be aware of and experiment with.

To illustrate the techniques, I’ll use the following example:

This is not a “bad” line and you will find similar lines throughout the jazz vocabulary, however, what we’re concerned with today is how to phrase in an exciting way and this line in isolation, as depicted, is quite boring. If you were to tag on an idea in front of it, or connect it to something else, immediately it would take on a new life, and that’s exactly what we’ll be talking about: how to take the ordinary and use it like a pro.

Avoid starting phrases on beat one

Amateurs constantly start phrases on beat one. This common way of starting a line allows the listener to easily predict where the next line will start. Consequently, there’s no interest to hold their attention and they stop listening.

Pros, while occasionally starting phrases on beat one, will more often than not start phrases on beats other than one. Instead of the original line, they might add pick ups to it or start later in the measure:

Notice how in all of these examples the line seems to have more forward motion? The reason it has this forward force is because the phrases start on other beats than one. There are many ways to do this, so just keep experimenting. And to reiterate, this is not a rule.

Break up the eighth notes

It’s a simple phrasing fix. Leave a note out in the middle of the line and it gives the phrase an entire new character:

Play over the bar line

For amateurs the bar line is a defined separator to be obeyed. Professionals play right on through it. The ideas they’re hearing dictate the phrase, not the bar lines. 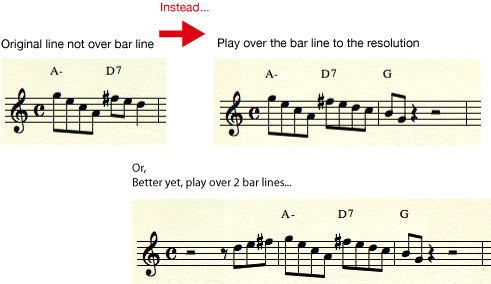 Connect one idea to the next

An idea in isolation is like an island, disconnected from the whole. Amateurs play many ideas that are disconnected. Pros play an idea that seamlessly flows into the next. For instance, supposing the original A- D7 line was going to G- C7:

Always be on the lookout to adjust a line so it will effortlessly connect and transition to the next idea.

Play into beat one and beyond

What beat is the end of the measure? Did you say four? Did you say the and of four? I hear one of the following measure as the end of a bar. Drive your ideas through beat one of the following measure and beyond. It’s similar to playing over the bar line, but thinking about things this way, driving towards one, will conceptually change the way you hear.

Pros know how to make their ideas sound exciting and full of motion. Use the ideas set forth in this article to take your phrasing to the next level.

And of course, turn to the records. By spending some time transcribing and carefully observing the precise way your heroes phrase, you’ll pick up more and more insight into what makes their phrasing sound so good.

Ditch any amateur  phrasing habits you have. It’s time to phrase like a pro.