At a certain point in your development as an improviser it becomes necessary to evolve beyond just playing “right notes” and using your favorite licks and move onto playing longer coherent musical phrases that develop over the length of your solo. This can be an especially frustrating stumbling block to overcome in that it takes a great amount of effort just to be able to play the “right notes” in the first place. So how exactly do you go from thinking about which scale to play over which chord to creating long innovative lines in the style of Bird and Trane?

Well, truthfully it has to do with improving every aspect of your overall musicianship. You need to have your technique developed to a point where you do not have to think about it while soloing, you must be able to hear chord progressions and their inherent resolutions throughout a tune and finally have an in-depth harmonic knowledge of the music.

All of these skills take years of dedicated practice and persistent study to develop and master, this is why it is so rare to hear people that are actually playing innovative and interesting long lines in their solos.

When we begin to improvise we are taught to play certain scales over certain chords, for instance a D dorian scale over a D minor 7 chord or a G bebop scale over a G7 chord. This is effective to a point in that it is a means to an end in getting a beginning player to play the correct corresponding notes with each passing chord. The more important skill for creating lines though, is developing ways to connect the chords and resolve the harmonies within an improvised phrase.

These voice leading principles are the building blocks of Western harmony and chord progressions and hearing these connections and resolutions are the first step in creating long improvised lines.

The true art of improvising lies in creating musical ideas and phrases within this established framework in original and unique ways. Take the music of a master like Bach for instance. He composed, and improvised, not only single elaborate lines, but multiple extended contrapuntal lines that were complex, yet always musical. Within each phrase were the necessary resolutions and voice leading techniques so that, to the listener, the intricate construction and technique were ultimately masked by the overall musicality of the phrases.

In the 1940’s, Charlie Parker and Dizzy Gillespie developed an innovative and intricate style of jazz that was essentialy a new language that required in-depth and devoted study to learn. For every musician that came after them, each one had to devote themselves to learning the language of bebop in order to speak it musically and eventually create their own sound. All of the players that we consider greats first found a way to master playing lines over changes and navigating every aspect of the harmony.

Think of Miles and Coltrane for instance, two masters that you can really hear evolve on records over the years. Miles began by playing with Parker and then spent a period developing his sound over standards until finally he was playing highly chromatic lines in the mid-60’s. In the same vein, when people think of Coltrane they think of “A Love Supreme” and his sheets of sound, but before being able to play that way, he spent a long time intensely working out lines over standards and figuring out ways to connect common chord changes and traditional harmonies in innovative ways. Check out this clip below of Coltrane practicing Four and working out lines over the changes:

Both Miles and Coltrane didn’t just learn bebop and move on to their own styles, but spent years developing their lines and sound over standards, continuing to develop their linear approach even after they were already considered great players.

Probably the best way to learn how to play longer lines is to transcribe and study the solos of the masters; analyzing the way the great improvisers navigate changes and develop lines in their solos. Below are two excerpts of solos, one of Bird and one of Clifford Browns, that really demonstrate how to play longer musical lines over common progressions.

This blues head is from a 1950 album entitled Bird and Diz. Transcribed below is the second chorus of Parker’s solo (which starts at about :47 seconds into the clip) in which he plays a line that is almost twelve bars long.

Here is a simplified version of the chorus using just the related scales and chord tones:

Then compare that to what Parker actually played:

Notice how Parker frequently uses triplets to vary the rhythmic structure of the solo and also how in the fourth and fifth bar he uses the tritone sub of C7 (F#7) to resolve to the F7. Parker is able to continue or extend  his lines many times through the use of chromaticism towards a goal note.

There is probably no one better to study for long melodic lines then Clifford Brown. This solo was taken from a 1954 live recording with Art Blakey titled a A Night at Birdland.  Below I transcribed Clifford’s second chorus (starting at 1:20 in the clip) on the Parker tune Confirmation. 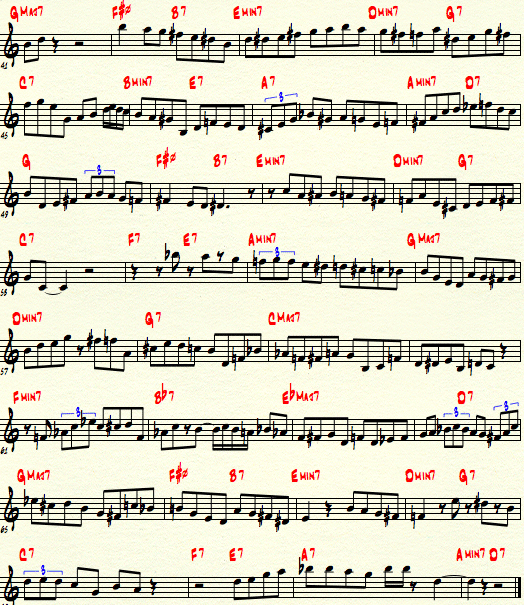 This tune has many ii-V’s to navigate and Clifford creates a solo where instead of playing licks for each ii-V, he develops lines and long phrases that flow into each other independent of bar lines. For example, take his line going into the bridge and coming out of the bridge. In both these spots, Clifford continues his lines through the form, rather than stopping his phrase at the end of each section or progression and starting again with the next one. By doing this his solo has a great deal of continuity and forward motion that keeps the solo unpredictable and interesting to the listener.

Another technique Clifford was very adept at was using chromatic enclosures around goal notes. Take the first four bars of the bridge for example:

Here Clifford utilizes each 7-3 resolution of the ii-V progression, but uses enclosures of chord tones to delay the resolution of each chord creating a much more interesting line.  He does not resolve to the third of the G7 chord directly on beat one, but waits until the third beat and in the same fashion reaches the third of the C Maj.7 on beat two of the second measure chord. With this technique Clifford is creating long lines by aiming for and chromatically enclosing chord tones. If you look at the two bars of CMaj.7 above, he is really just enclosing the 5th, 3rd and root of the chord with chromatic upper and lower neighboring tones.

The other part of your musical foundation are your ears. To play longer lines you must also be able to hear resolutions in chord changes over longer sections of a tune rather than just one progression at a time. Hearing guide tone lines and resolution points in the chord progressions of a tune are key to creating well crafted lines as you improvise. As your ears become more developed,  you will naturally hear where your lines want to resolve or create tension as you solo.

After studying the excerpts above, a few devices are apparent in both solos that really make interesting long lines:

Our goal as improvisers should be not just to make the changes, but to create unique well crafted lines throughout the course of our solos. In teaching his ensembles, Mulgrew Miller often said that it took extremely slow practice to discover the intricacies of the harmony and to develop lines that connect it. Developing jazz language takes quality practice and in-depth study, something that takes years of continued dedication to develop, but ultimately this type of study is the most beneficial and rewarding for an improviser.