What do you play over a minor ii V? Minor ii Vs are notoriously tricky. As compared to their brother, the ii V in major, the ii V in minor adds quite a few more challenges. First off, instead of a minor 7 ii chord, it has a minor 7 b5 ii chord. This causes a world of pain for most people. They simply don’t know what to play over this chord…

It’s actually not that difficult if you master the chord tones instead of thinking of scales all the time. Sure, you can do what everyone teaches you to do and think of the Locrian mode, but that will only get you so far. You need to get beyond that and not suck at half diminished chord.

Ok, so once you’ve learned how how not suck at half diminished chords it’s time to understand what’s going on with the dominant chord in a minor ii V…

As you’ll see, I simply label them as dominant chords and don’t add any alterations to the symbol. Why? Because alterations can be implied even on a standard V chord. Simplify your life by just thinking of them as a dominant chord with all sorts of flavors you can add to it or modify.

When you look at charts of jazz standards, you’ll see that the editors add in alterations to the V7 chord in a minor ii V, and in general, you’ll hear alterations at this point, however, who’s to say exactly what those alterations are?

Depending upon who is comping, they’re going to alter the dominant chords in different ways, that’s why it’s so important to learn how to hear the subtleties of chord voicings, a skill we teach in the Ear Training Method.

So, as I mentioned to you before, think of them as just a dominant chord, visualize the alterations you can make to them, and learn to hear the different voicings.

How do we find great ways to play over minor ii Vs?

As we detailed in this diagram on how to practice, if you know the harmony to a particular tune, then you can transcribe one of your heroes over that progression to acquire specific language.

Well, I happen to know the tune Woody’n You contains a bunch of minor ii Vs in the ‘A’ section. Check it out… 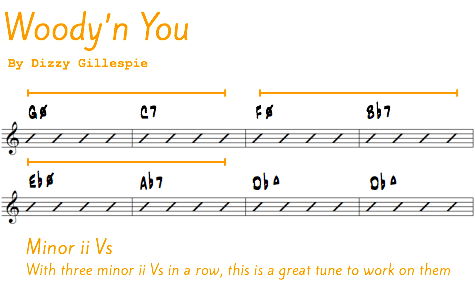 So, a simple strategy to find great ways to play over minor ii Vs would be to find one of your personal heroes playing Woody’n’ You and go to town.

One of the greatest jazz pianists to ever live, he’s still influencing pretty much every jazz pianist today.

Listen to his solo on Woody’n You:

Now let’s rip it apart and figure out some ideas for how we can play over this tricky progression, the minor ii V. And a lot of these techniques will work on a ton more than just minor ii Vs, but start with the context you find them in.

The first phrase we’ll look at is the first eight bars of his solo.

Now listen to it again at half speed:

There’s a lot going on here that we can learn from. Right away, notice his use of motivic development. He begins with a simple motif over the G half diminished chord. He then develops that motif by changing the bottom note and playing with the time.

This motif is developed all the way until the end of the phrase, resolving to the major chord.

Listen to the phrase again and then we’ll look at specific techniques that we can learn from this phrase.

Now it’s not just the use of the minor triad, but it’s how he uses it.

Notice the inversion of the triad which creates interesting intervallic content, much more so than if he just played the triad in root position.

This technique is powerful. Practice it and you’ll notice how easily you can make beautiful motifs that can then be developed as Bill Evans is doing here. 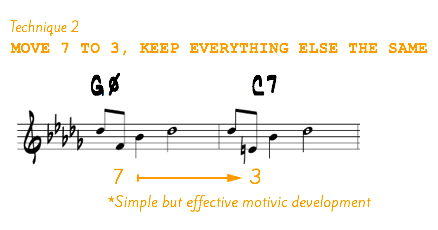 He was a genius. It’s mind-blowing how such a small change can do so much.

An important point to note with this technique is that there’s no way you would arrive at this phrase if you were thinking strictly of scales. You need to understand the harmony and each chord tone on a deep level. 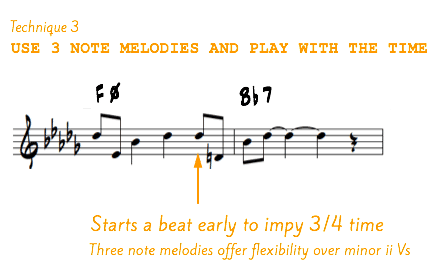 This next technique Bill Evans uses from the start of his solo, but then develops in these measure. These 3 note melodies allow a flexibility over minor ii Vs that doesn’t seem to come naturally when you think about the progression.

And these 3 note melodies can easily be changed rhythmically to create interest. 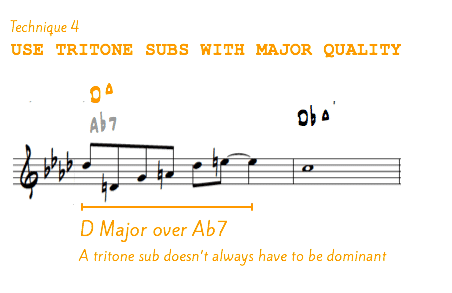 A tritone substitution that uses major?

Indeed. Who says a tritone sub always has to be dominant?

Instead of the standard D7 substitution for Ab7, he uses D major. Try it. You just might like it! 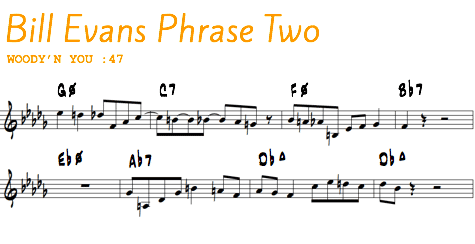 The central theme of this second phrase is chromaticism.

Let’s look at how he uses this chromaticism to gain a fluidity over the minor ii V progression. 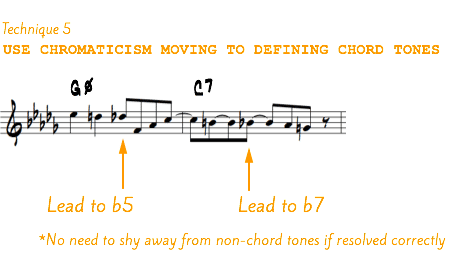 Here Bill Evans plays the natural 5th over the half diminished chord and the major 7th on dominant.

How’s he get away with this? Chromaticism.

When he uses chromaticism to lead toward important notes in the chord, it clarifies the sound of the chord. 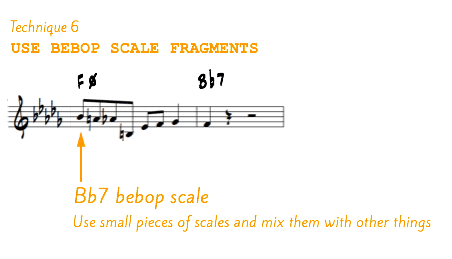 Bebop scale fragments are an old standby that all great players use. Remember, you don’t have to use the whole scale. A small fragment like this mixed with other chord tones can sound great. 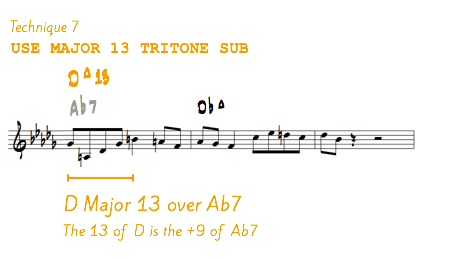 Taking the Tritone major sub a step beyond, try adding the 13th to the mix. The 13th will give you the +9 sound over the dominant chord.

The main idea in this phrase is scales.

Pay close attention to how he uses scales and how he doesn’t use scales. In today’s jazz education world, scales are sold as the secret, but they’re not. They’re important, but they’re just one tool to add to your tool box. 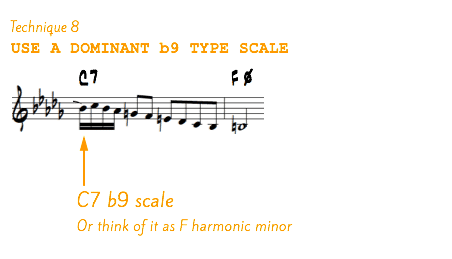 This scale can be thought of a number of ways and every player pretty much uses it at some point. I call it a b9 scale, but you can also call it F harmonic minor. 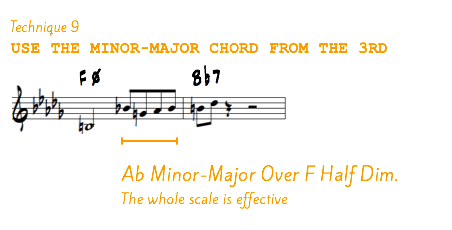 Just as we utilized the minor triad starting from the 3rd of the half diminished chord, fragments from the whole minor-major scale can be used. 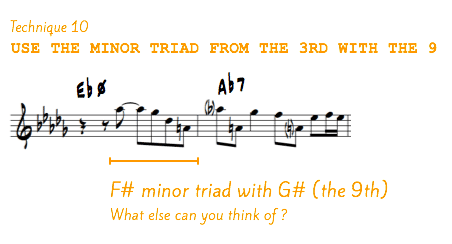 This technique builds upon Technique 1. You simply add the 9th to the triad, so instead of just the minor triad from the third you now include one more note, the 9th.

Try to create motifs with these four notes.

Then, see what other variation on the minor triad you can come up with. If Bill Evans adds the 9th, what else might you add instead?

Bill Evans Phrase Four:
Using diminished and putting it all together 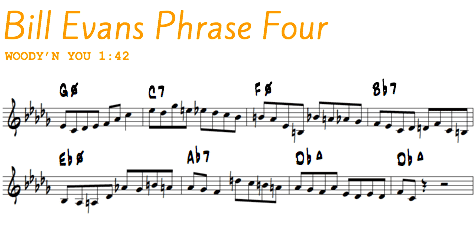 Now listen to it at half speed:

Make sure when you’re finished reading this, go back and see if you can find all the instances he uses each technique throughout each phrase. He uses many of them multiple times.

As we talked about before, there are a million ways to approach a dominant chord in a minor ii V. Yet another way is the half-whole diminished scale. 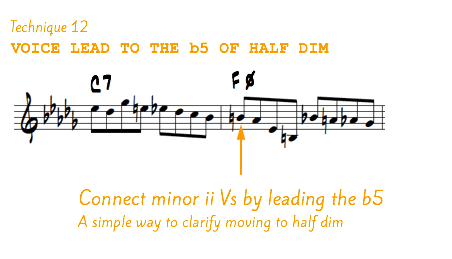 When you’re first starting out with the progression to Woody’n You, I bet you’ll have difficulty moving from one minor ii V to the next.

Voice leading from one to the next, aiming for the b5 of the half diminished chord will help you with this transition. 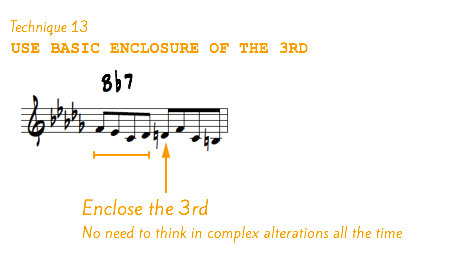 Remember that just because everything seems to be altered all the time in a minor ii V setting doesn’t necessarily mean you have to think like that.

A simple enclosure of the 3rd on the dominant chord works just fine. 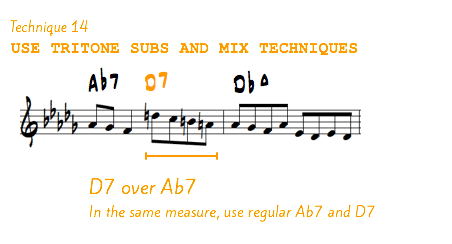 This technique brings an important point to the surface. Within one measure, you don’t need to stick to one technique. For instance, here, he only uses a tritone sub for two beats instead of the whole measure. You can apply the techniques just for a moment, or you could switch off between two.

By transcribing one of your heroes it’s like taking a lesson with them.

There’s so much to learn within each and every phrase.

Take these 14 techniques and experiment with them. Mix them together and be creative with how you apply them! And then work up to finding your own ways to play over the minor ii V progression.

With some practice and a little inspiration from Bill Evans, you too can master the minor ii V!