Every improviser has to face it at some point. We’re talking about those 32 bars of music that you know as Rhythm Changes. Sure it’s easy enough to sing the melody…And you’ve heard all the recordings of famous musicians playing circles around this familiar chord progression. But when it comes to improvising your own solos it can be tough.

A single scale doesn’t work and the chords are changing too quickly to think about music theory or those fancy lines you’ve memorized.

To sound great on this tune you need something else…

Time to learn from an expert


So what are you going to do?

You can look in books for patterns. You can think about music theory. You can even try to fake it with a few scales.

But that’s not music…at least not the kind you would pay to hear at a concert.

To start playing the way you envision, you need to get answers from someone that knows what they’re doing. And that means searching for the best recordings and learning why those players sound great.

When you transcribe the solo of a master musician and figure out why it works it’s like having a mentor tap you on the shoulder to say, “Hey, instead of that stuff you’ve been playing, try playing it like this!”

Let’s take a listen to John Coltrane’s solo on Oleo from the album Relaxin’ with the Miles Davis Quintet:

Sounds great, right? Now what you can learn from this solo that will change your own playing?

Today we’re going to break down four key concepts from Coltrane’s solo to find out why it sounds great. Along the way we’ll give you some essential practice exercises to develop these techniques in your own solos. 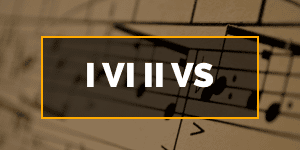 The first step to improvising over Rhythm Changes is learning how to play over a single chord progression… I – VI – ii – V7.

This chord progression might not look that important at first glance, yet it’s in nearly every standard that you’re going to play.

From Rhythm Changes to the blues to the turnarounds in countless standards this is a progression that you need to master.

So how are you going to sound good on this progression? Well, like any musical obstacle, find a player that sounds great and find out why their lines work.

And this is where that Coltrane solo comes in handy.

When you listen to the solo you probably thought it sounded great, but maybe too complex. However, if you listen more closely you’ll find that he is using the same musical devices over and over again.

Here are 3 ways that Coltrane plays over these chords using the same melodic and harmonic concepts:

Notice how Coltrane uses the same devices in all 3 lines:

Listen to the 2nd line and note how he encloses the C and uses an F Bebop scale to reach the F. 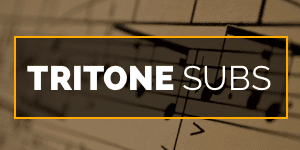 One method that Coltrane uses to add some harmonic interest to his lines is the tritone substitution.

Simply substituting the V7 chord in a progression with a chord a tritone away. For example, in a ii-V7 – I in the key of Bb, the F7 chord would be substituted with a B7:

You’ve probably heard of bebop players using tritone substitutions as a reharmonization technique, but the technique of substituting chords, especially implied melodically, is something that all great players do.

Check out how Coltrane uses this technique in his solo on Oleo:

Instead of following the standard chord progression, he substitutes a Db7 for G7 and a B7 for F7.

Take another listen to those tritone subs (this time at a slower speed):

Note how this substituted progression creates a descending chromatic root movement from Db7 to C to B7 to Bb.

Coltrane utilizes this half-step movement in his solo in the line below. Essentially thinking of three major triads in a row – Db, C, and B which resolve to Bb in the next measure.

III) ii-V’s on the Bridge 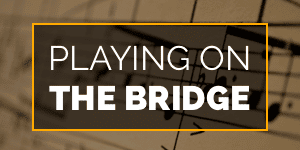 The next challenge of improvising over rhythm changes is the bridge…

Eight bars of V7 chords moving around the cycle of fourths that come back every chorus. What exactly are you supposed to play over these chords??

Not if you want to sound musical.

Let’s check out what Coltrane plays the first time through the bridge:

The reason that this line sounds good is that he’s playing musical language, not scales. And the reason his lines have forward motion is that he’s thinking of ii-V’s…

Over each two bar Dominant 7 chord he is implying a ii-V7 instead a static dominant chord. For example, over the G7 chord he plays D minor to G7: 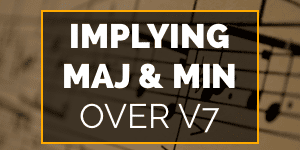 Another way that Coltrane approaches these static dominant chords on the bridge is from the b7 scale degree.

For instance a C Major sound over a D7 chord.

Practice approaching V7 chords from the b7 scale degree. You can start with arpeggios or other major language that you’ve developed.

(This is the same concept that Fats Navarro’s played over the bridge to Rhythm Changes that we looked at in this post!)

*Looking for even more practice on Rhythm Changes? Check out this lesson with the 6 Rhythm Changes Solos Every Improviser Should Know!

With these four Coltrane concepts you’ll have more than enough material to head into the practice room.

And if you put these ideas to work in your playing you’ll begin to see Rhythm Changes in a new light.

However, practicing these concepts is only the first step…

Remember, knowing the theory behind each of these concepts isn’t enough. You need language to make them musical.

Start by getting inspired with the melodies that Coltrane played and then find new ways to create your own!