No pianist has influenced the modern approach to jazz piano more than McCoy Tyner. From players like Chick Corea and Mulgrew Miller to non-pianists like Woody Shaw and Michael Brecker, McCoy has left his mark on generations of serious improvisers. And one distinctive element of his approach to improvising is his creative use of the pentatonic scale.

But it’s more than the five simple notes that most musicians think of using over a minor chord. As you’ll soon learn below, the pentatonic scale can add a wealth of harmonic and melodic possibilities to your solos.

Take a listen to McCoy Tyners’ solo on Blues on the Corner from the album The Real McCoy:

The Blues is a form that every improviser must learn and master if they want to become a proficient player. You can approach it with blues language, bebop, or even modern and outside approaches – it all comes together in the blues.

If you’ve subscribed to JazzAdvice I’m guessing you’ve learned more than a few options for improvising over V7 chords.

However, one scale that many players don’t think about on V7 chords is the minor pentatonic scale. And that’s exactly what we’re going to look at today.

In his solo on Blues on the Corner, McCoy Tyner uses the minor pentatonic scale over dominant chords in two specific ways: (1) from the root of the chord and (2) from the 5th of the chord. 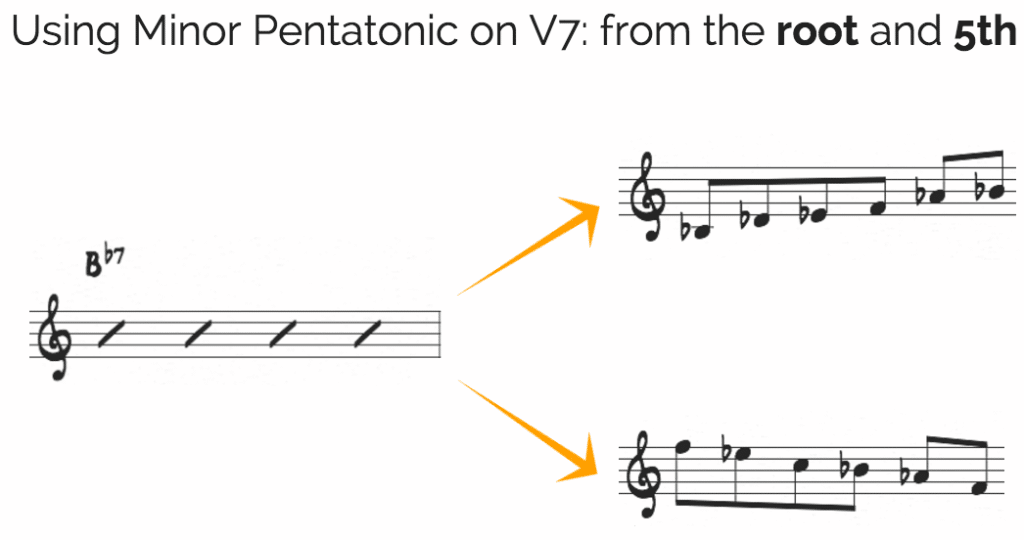 Root of the Chord:

To begin, let’s take a look at how he approaches dominant chords with a minor pentatonic scale built from the root. In the line below, McCoy uses a Bb minor pentatonic over Bb7, take a listen:

Notice how this scale emphasizes the b3, b7 and 11th of the Bb7 chord in a way that is very similar to traditional blues language or the blues scale. Here’s another example that starts on the 5th note of the Bb minor pentatonic scale:

5th of the Chord:

The second way McCoy uses the pentatonic scale in this solo is from the 5th of the V7 chord. Check out how he employs this technique in the line below:

But wait a second, why does this work? This scale is missing the one note that defines the harmony – the 3rd.

Well, this concept goes back to the bebop reharmonization technique of approaching the V7 chord as the related minor ii chord, for example thinking F- over Bb7:

You can also think of that static dominant chord as the related ii-V7. For example, F-7 Bb7 over Bb7.

A Note on McCoy’s Left Hand…

The signature “McCoy Tyner sound” hinges on one thing – his left hand.

McCoy’s left hand is central to the lines he plays in his right, both rhythmically and harmonically. Those iconic 4th and 5th voicings that you hear are perfectly suited for the pentatonic and intervallic lines he plays on top.

Additionally, the absence of tertian structure in his voicings allows for more harmonic freedom. Below are 3 unique aspects of McCoy’s left hand…

McCoy often plays the root and 5th of a chord in his left hand, creating a pedal point for his 4th voicings and improvised lines. If you’ve listened to the classic Coltrane Quartet or any of McCoy’s extensive discography you’ve heard this sound: 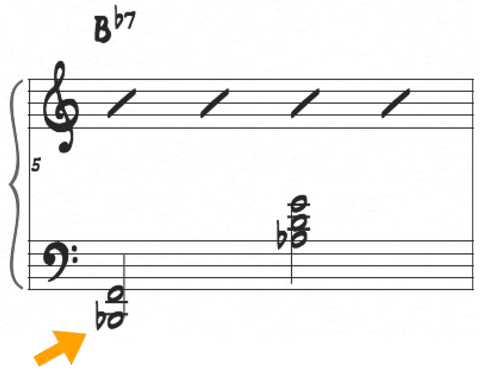 Throughout this solo McCoy voices dominant chords in stacked 4ths – either from the root of the chord or the 7th of the chord. For example, over Eb7 he will play Db, G, C and then switch to 4th’s built on the root (Eb, Ab, Db):

The tritone interval in the augmented 4th (Db to G) creates more tension while the perfect 4ths are an open sound that don’t require resolution.

Side-stepping with the left hand:

One reason why McCoy has so much harmonic freedom on a simple blues is that he justifies the lines in the right hand with the voicings in his left. After he hits the open 5th in the bass he is free to any number of harmonic colors or movement with the 4th voicings: 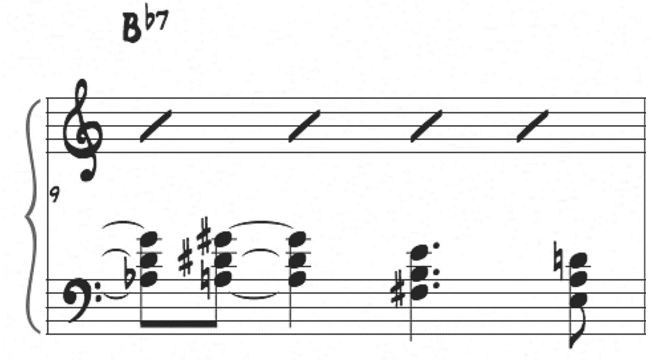 2)  Utilizing shapes and patterns within the pentatonic scale

Unlike the whole and half-step sequence of the major scale, the five notes of the pentatonic scale naturally lend themselves to leaps of minor 3rds, 4ths and 5ths.

Without the harmonic pull of leading tones or the rigid structure of tertian harmony, every note is essentially equal in relation to the harmony. Because of this, you can focus on shapes, cells, and patterns with the notes of the pentatonic scale.

Check out how McCoy plays a quartal pattern based on the Bb minor pentatonic scale:

And study how he uses scale patterns, fragments, shapes, and sequences to create melodic interest with the pentatonic scale. The line below is a great example of how to combine these concepts musically:

There are multiple techniques to be learned from each of these pentatonic lines. Start by taking one fragment into the practice room and exploring the different possibilities in all 12 keys.

McCoy Tyner was a master of creating harmonic tension and release within his own solos and the harmonic textures he provided behind other soloists.

Throughout his solo on Blues on the Corner, he utilizes harmonic tension at pivotal points in the progression to create interest in his musical phrases.

A perfect spot to employ harmonic tension and release in your own solos is over V7 to I motion. In the blues this happens between the 4th and 5th bar of the progression as the I chord moves to the IV7 chord:

Take a listen to how McCoy creates harmonic tension at this spot as Bb7 resolves to Eb7:

McCoy creates this effect by utilizing the minor pentatonic from the root, shifting up a half-step to a B minor pentatonic, and resolving the line through standard ii-V motion:

Another example of this technique occurs in the last two bars of the form leading to the start of another chorus. Here he uses a pattern of ascending 4ths, similar to the 3rd and 4th bars of the melody:

Finally he uses pentatonic motifs/shapes to navigate quickly moving chord progressions. In the excerpt below, study how he navigates the chromatic ii-V’s with pentatonic material:

To navigate this quickly moving chromatic ii-V he utilizes pentatonic movement along with ii-V7 motion:

Practice this technique in your own solos:

For many players, the pentatonic scale has become predictable…even boring.

But as you can see, in the hands of a musical master the sky’s the limit.

Start today by reviewing your minor pentatonic scales in every key, then take these concepts and apply them to your practice routine one at a time.

The more time you take to ingrain and master this material, the more progress you’ll see in performance. Remember, this solo is only the tip of the iceberg.

Get your hands on as many McCoy solos as you can and see what discoveries you can make on your own!