Your mother probably taught you not to steal…That taking something that wasn’t yours was wrong or that pocketing an item from the shelves of a store could land you into a world of trouble. But what you or your dear mum might not realize is that some of your favorite improvisers are cold-blooded thieves.

And it’s not just musicians that are guilty of this sin.

You see the rules are a little different when it comes to learning a craft. In the world of jazz improvisation, musical theft is actually one of the best ways to learn the crucial skills you need to play a solo.

Think of yourself like a musical Robin Hood…you know, the whole “steal from the rich and give to the poor” thing. But in this case you (the practicing musician) are the poor one without any musical riches. You need ideas, harmonic techniques and creative inspiration.

And everywhere you look you’re surrounded by recordings of immensely wealthy players that have exactly what you need.

If you’re frustrated with the way your solos sound and you want to make meaningful improvement you need to start “borrowing” ideas from the best players. Actually scrap that…you need to storm in, steal everything you can carry, and run for the door!

What all those books and courses won’t tell you is that music theory is useless without a real-life model. You need someone to show you how to put all of those scales and chords together in a way that makes sense – that makes music.

So rather than telling you to do it, let’s dig a little deeper. Below we’ll show you exactly why stealing is essential for your improvement and explore 3 ways you can implement creative theft into your routine.

A tradition of “borrowing ideas”

One of the most important aspects of learning to improvise is imitation.

Listening, transcribing solos, learning tunes, and shedding lines in all keys. There are dozens of names for this process, but at the end of the day it’s simply a glorified version of musical theft.

And the more you study innovators and leaders, you’ll realize that you’re not alone. History is full of people that took an established idea, that found a working process or method and adapted it to their own situation. Look at Henry Ford or Steve Jobs.

Music is no different. All great musicians start by imitating their teachers or musical idols because the truth is, copying the greatest musicians around you is the best way to learn.

If you’re serious about sounding authentic, learning the tradition, and gathering the skills to create a solo you need to steal ideas that work. Remember, the secret of jazz isn’t contained in a book with concise lessons, it’s on the recordings of the masters that came before you.

To improve you can’t just read about this information, you need to physically take it and make it your own.

The tradition of imitation is evident everywhere in this music. You probably know Clifford Brown, but go back and check out Fats Navarro. Listen to Joe Henderson and Stanley Turrentine and then put on a Michael Brecker recording…

The more time you spend listening, the more you’ll hear the influence of past players in the new musicians of today. This is because style has to have a starting place – a point of inspiration or influence.

Your goal in stealing musical ideas isn’t to become a clone, rather to learn a craft through imitation and immersion. And this is something that you should incorporate into your daily practice routine. Here are 3 Exercises for Stealing Musical Ideas:

#1) Steal one piece of language

Let’s start at the beginning…

You don’t have any ideas. You’re struggling through a chord progression. You’re staring at a page in the Real Book and you’re drawing a blank. Sure, you know how scales and chords work, but for some reason these things aren’t turning into a satisfying solo.

Or maybe you’ve found yourself bored with the same old scales and licks. No matter what tune you play, every solo starts to sound the same.

Every musician can relate to these situations, but what can you actually do overcome these roadblocks?

Well the solution is surprisingly simple, but often ignored. Rather than “jamming” along with a play-a-long and hoping for a breakthrough or getting down on your playing when you get stuck, try something different…

Your goal here is simple: take one line from a great player and steal it…note for note.

For example, let’s say you are trying to play Giant Steps and you don’t know where to begin. Instead of improvising blindly or trying to match scales with the chords in the Real Book, stop and try a new approach.

Find a player or recording that you like and make their musical ideas your own:

For instance, maybe the opening line of John Coltrane’s solo (at :26 sec) grabs your ear. Steal it – transcribe it, memorize it and figure out why it works:

Now, instead of a blank slate or disjunct scales, you have a melodic starting point for your solo on Giant Steps.

Start by learning this line in all keys, gradually increasing the tempo until you can easily play it along with the recording: 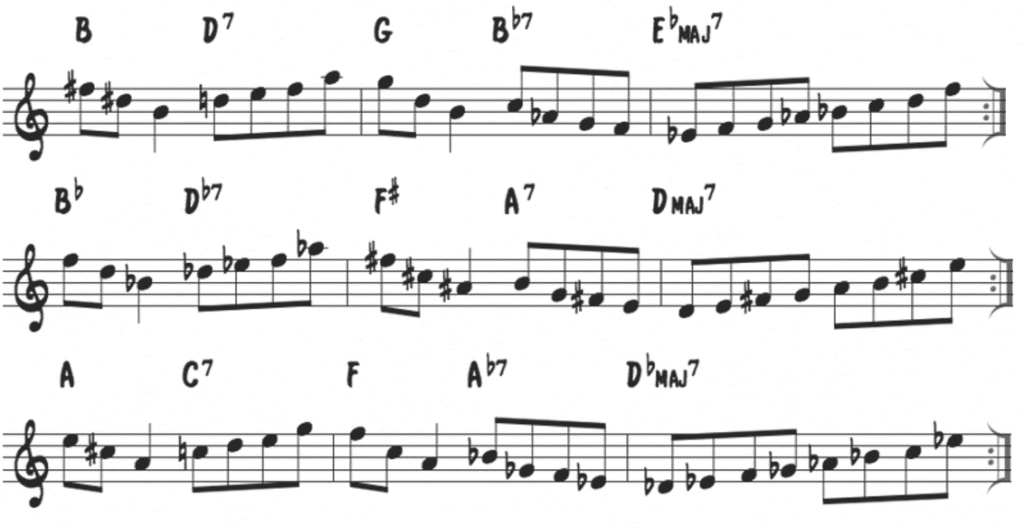 As you try improvising, use this Coltrane line as your starting point, inserting the line directly into your solos. (The process is exactly the same for single chords, progressions, or tunes that you are having trouble with.)

Give it a try with the sound clip below: 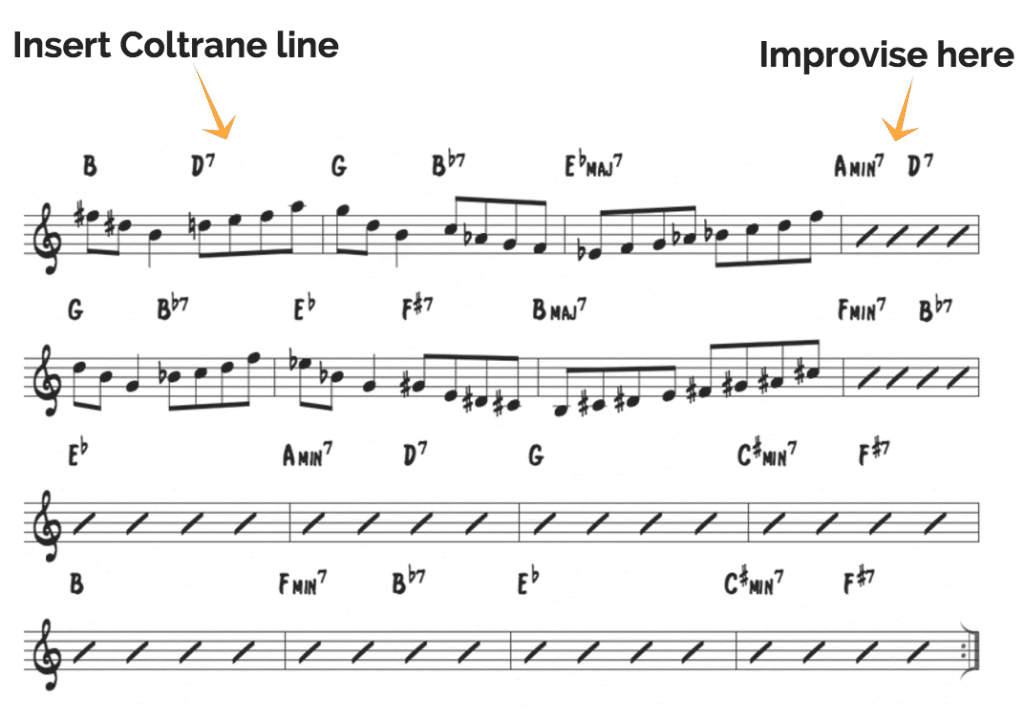 After a few run throughs you’ll start to get bored with the original line. You’ll want to alter the rhythm, change the direction of the melody or the intervallic structure, to alter notes and chords – this is where your creativity comes in!

#2) Steal a harmonic or melodic technique

Not everything that you steal has to be notes or lines.

You can steal a musical approach – a way of playing melodies or applying harmonic concepts to chords and tunes that is unique.

And this technique can open up new avenues of creative expression, especially when you encounter tricky spots in a tune or find yourself bored with your solos.

Here you’re not stealing exact lines, so much as a melodic technique or implied harmonic tool to apply to your own solos.

Start by isolating the parts of your playing that need work and find the players and solos that have what you need. You might steal a new way to play over V7 chords, options for navigating the first 4 bars of rhythm changes, or even ideas for improvising over minor ii-V’s.

Rather than a lick that has to be played the same way each time, these musical techniques are particularly effective because they can be applied to any chord or tune in countless variations.

For example, let’s say you like the way Charlie Parker is approaching and resolving the V7 chords in his blues choruses on Cheryl.

Perhaps the line Parker plays at 1:49 in the video grabs your attention:

Find the harmonic concept at work and steal it for your own solos! In this particular case Parker is altering the V7 chord over a ii-V-I. As you can see below, he emphasizes the altered notes of the dominant chord on strong beats:

Your goal now is to extract this harmonic concept and incorporate it into your approach to improvisation.

You don’t have to learn the line note for note in every key, you can simply take the overarching concept and apply it to other dominant chords.

For example, here’s an easy way you could apply this Parker concept of adding altered notes (b9, #9, b13) to a basic ii-V line:

Or looking at the same line in another way, you can steal the melodic technique of a descending b2 triad over a V7 chord:

You can use this technique in the exact same way Parker does or you can apply this concept in your own unique way – totally up to you.

The same process can be applied to dozens of other players, melodies, chords or harmonic concepts that you might encounter. For instance if we go back to the Coltrane line from the first example, you could steal the bebop reharmonization technique that he uses on a V7 chord: 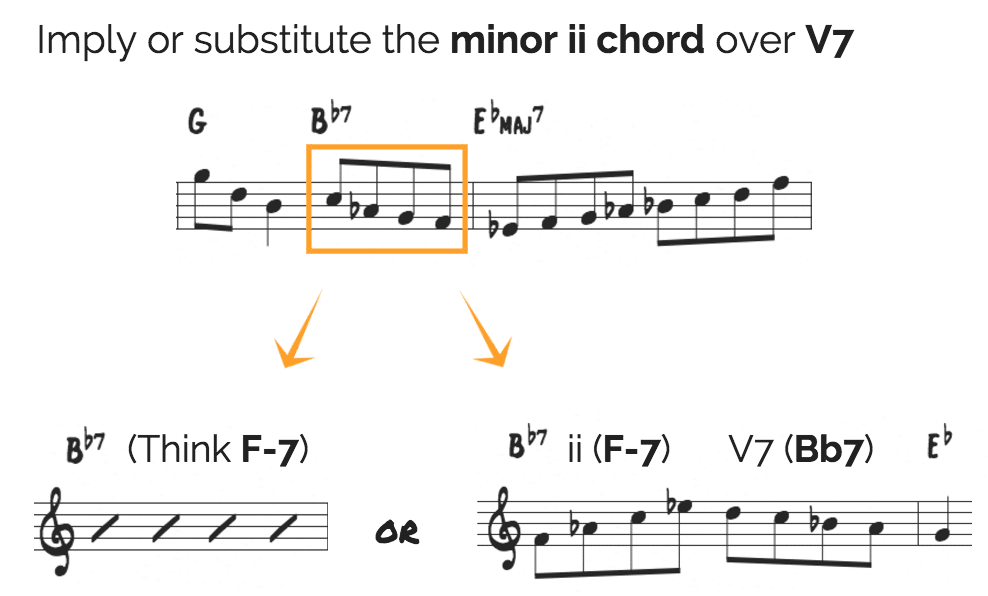 Again, it’s not so much the exact notes that you’re stealing as it is the harmonic & melodic techniques that you’re extracting and applying to your own language and solos.

When you listen to a great player improvise or even play a simple melody, there is something intangible there that goes beyond notes and music theory.

You might call it musical style, expression, time, or feeling…

And for many aspiring improvisers, this is the vital aspect of a solo that’s missing. The piece of the puzzle that turns all of those scales and theory concepts into music that people actually want to listen to.

With all of the emphasis nowadays on the mental approach to theory and improvisation, it’s easy to lose sight of your intuitive approach to music and the personality or feel of what you’re playing.

…this is where the third element of musical theft comes into play.

As an example, think about the way Miles plays a solo or the feel of the album Kind of Blue:

Within seconds of pressing play the sound of the trumpet creates a mood and the entire recording creates a vibe. Beyond notes and harmonic techniques, this is the element that you need to take from your favorite players.

Start by identifying the players that speak to you, the recordings that inspire you, and the solos that you wish were your own.

Strive to get into character…a musical character.

This exercise isn’t about the notes or theory, it’s all about imitation. Don’t over-intellectualize it, just copy what you hear.

By shutting down your analytical mind, closing your eyes and opening your ears you’ll become one with the musical lines of a master. This exercise can become one of the most inspiring and insightful things you do in the practice room.

You can escape the predictable approaches to your own solos and discover new possibilities within the music.

Improvising is not magic…

Sometimes we make improvising more complicated than it is.

We think there are rules in place that we must follow, hidden methods that hold all the secrets, or a magic scale or approach to a chord progression that will show us the answers.

But the truth is that the answers you’re looking for are right in front of you, you simply have to take them.

And you should be stealing every little detail, not just the notes…

Try one of these 3 exercises in your practice this week.

Spend a few minutes identifying the places in your playing that need the most improvement or the aspects of improvisation that are holding you back.

Then isolate that chord, progression, or tune and pick your favorite player to borrow an idea from. It could be one of their musical lines, a harmonic concept, or simply one of your favorite recordings that you imitate.

Remember, something as simple as two beats of music from a master soloist can give you a musical revelation. A tool that you can use in all of your solos. Or even the creative breakthrough that you’ve been desperately searching for…

It’s all there, hidden in the recording – you just have to steal it!